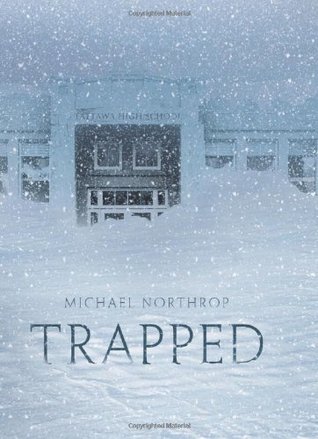 The day the blizzard started, no one knew that it was going to keep snowing for a week. That for those in its path, it would become not just a matter of keeping warm, but of staying alive. . . .

Scotty and his friends Pete and Jason are among the last seven kids at their high school waiting to get picked up that day, and they soon realize that no one is coming for them. Still, it doesn’t seem so bad to spend the night at school, especially when distractingly hot Krista and Julie are sleeping just down the hall. But then the power goes out, then the heat. The pipes freeze, and the roof shudders. As the days add up, the snow piles higher, and the empty halls grow colder and darker, the mounting pressure forces a devastating decision. . . .

Trapped is a short and quick read that I enjoyed until it abruptly ended.  Were the last few chapters accidentally left out of my copy?  Nope, that was it!  Who lives, who dies, and what’s going to happen next?  I will have to decide that on my own…

I was pulled in from the beginning wondering what was going to happen.  I knew it was going to be a bad storm, but the snow just would not stop!   These poor kids just kept getting worse off as the novel progressed.  For a YA novel that has boys and girls stuck alone together, there surprisingly was not much teenage drama: They were focused on survival.

If you like quick YA reads, give Trapped a try. Our narrator is a boy, which is a rarity in YA novels.  *Disclaimer*:  Going in keep in mind that the novel ends with no conclusion/ epilogue.

Northrop wrote another novel which interests me called Surrounded by Sharks.   It is similar to Trapped in that it deals with survival, but I doubt I will read it.  It is about the same length as Trapped and I am afraid that there will be no conclusion, and my thinking is this:

If you have actually read Surrounded by Sharks, I would love to know if there is a conclusion to that novel!

Other than the lack of conclusion, Trapped would be perfect to read while it is snowing: I just hope you don’t end up in a blizzard like our poor teens!