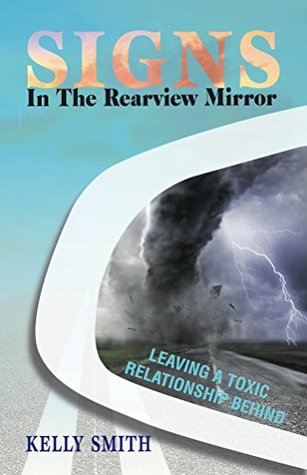 What kind of person ends up in a toxic relationship? And why does she stay? This searingly honest novel answers both those questions head-on. Coming out of a failing marriage, Kelly turns to Gabe out of fear of being alone. Her gradual slide into danger is at once terrifying and inevitable, and the steps she takes to get out of it will both inspire and offer hope.

Signs in the Rearview Mirror is Kelly Smith’s firsthand account of her toxic relationship and how she finally escaped from it. She speaks to us herself telling her story, though names have been fictionalized.  Kelly leaves her marriage where she was not the best spouse herself, thus exposing her children to a bad female relationship example.  Then via Facebook (isn’t it always through Facebook!) she reconnects and then turns to Gabe who she barely knew in high school and once had a meaningful conversation.  Out of her fear of being alone she began a long-distance relationship.   Looking back, she now sees the warning signs, but chose to ignore them and the danger she was putting herself and her children in.

Kelly’s relationship with Gabe gradually got worse over time, but eventually she was able to leave.  There were so many times as I was reading this memoir that I was hoping at Kelly would leave Gabe.  This was a quick but also difficult read as this was what someone actually went through in her life.  And many women (and also men!) experience this life daily.

Bravo to Kelly for sharing her experiences and story with the world.  This is a book that can help those that are in a similar relationship. To them: You CAN succeed and get out of that toxic relationship!  I actually plan to put my copy of this memoir in my local free little library in hope that it might help someone who sees this memoir and in this type of relationship.

Signs in the Rearview Mirror is recommended.