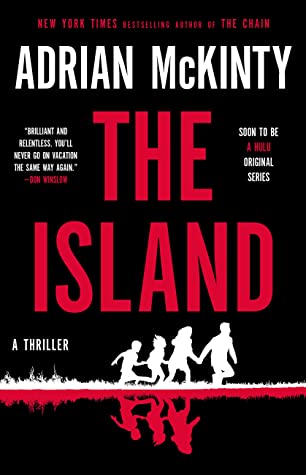 It was just supposed to be a family vacation.
A terrible accident changed everything.
You don’t know what you’re capable of until they come for your family.

After moving from a small country town to Seattle, Heather Baxter marries Tom, a widowed doctor with a young son and teenage daughter. A working vacation overseas seems like the perfect way to bring the new family together, but once they’re deep in the Australian outback, the jet-lagged and exhausted kids are so over their new mom.

When they discover remote Dutch Island, off-limits to outside visitors, the family talks their way onto the ferry, taking a chance on an adventure far from the reach of iPhones and Instagram.

But as soon as they set foot on the island, which is run by a tightly knit clan of locals, everything feels wrong. Then a shocking accident propels the Baxters from an unsettling situation into an absolute nightmare.

When Heather and the kids are separated from Tom, they are forced to escape alone, seconds ahead of their pursuers.

Now it’s up to Heather to save herself and the kids, even though they don’t trust her, the harsh bushland is filled with danger, and the locals want her dead.

Heather has been underestimated her entire life, but she knows that only she can bring her family home again and become the mother the children desperately need, even if it means doing the unthinkable to keep them all alive.

I absolutely loved The Chain last year when I read it, in fact it made my Top 10 for 2021! Therefore, I was anticipating The Island (and the two covers match with the red, white, and black covers!!). As I started listening to the audiobook, it reminded me of the movie Wrong Turn: 2021: Except for being a group of friends going off the Appalachian Trail and subjected to the ‘natives’ of the area we have a newly formed family unit on a working vacation In Australia.  They go to a private island that is not for tourists and are subjected to the local island family. The Baxter family is a newly married couple who have known each other for nearly a year and his two kids from his previous marriage where his wife has died. The kids don’t like their ‘new step-mom’ either.

An accident happens and the Baxter’s are then at the lack of mercy of the island family (the O’Neills) and it becomes a struggle to survive.  Heather is in her mid-20s and has never even babysat suddenly finds herself having to worry about two kids that barely know her and don’t like her.  The action gets going and Heather transforms into a badass heroine she needs to become. She knows more than she seems to!

The Island is a novel that shows the fight for survival and the lesson of: Don’t go where you are not supposed to or you might live/die to regret it!  Though a minor character, Ma was downright frightening: Don’t mess with the matriarch of the O’Neill clan!

The Island is fast moving with lots of action and there are multiple deaths throughout. You must suspend your belief in reality with this one and just go for the ride otherwise you might not enjoy it.  As the novel progresses you see the growth between Heather and the kids as they fight to survive.  Not as intense as The Chain, but The Island keeps you wondering what will happen next and will Heather and the kids survive.  There are twists along the way and this was an enjoyable read.  It is apparently going to be a Hulu series and I look forward to watching it whenever it is released.

I liked the narrator, Mela Lee who did a good job with the Australian accents as she is an American actor.  In addition to the narration there were sound effects throughout the novel, which included gun fire.  I mainly listen to audiobooks during my work commute so I could have done without this addition!  I know it was to enhance the story, but the sound effects can be distracting.  A disclaimer would have been nice to have at the beginning of the audiobook.

I look forward to see what McKinty writes next.