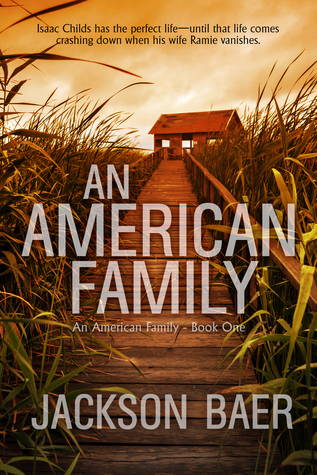 Isaac Childs has the perfect life—until that life comes crashing down when his wife Ramie vanishes.

Isaac learns that his wife’s disappearance is the ninth in a string of similar cases. In the wake of this news, he struggles to cope, to be a good father to his daughter and college-bound son, and to reclaim something of an ordinary life even as he conceals his troubled past.

After the FBI makes an arrest, and his wife is presumed dead, Isaac begins to move on. Yet will his secrets catch up with him? Has he conquered his vices for good? And what of the FBI’s theory that the case isn’t completely resolved, after all?

Evolved Publishing presents the first book in the “An American Family” series, contemporary suspense thrillers that explore one family’s trials and tragedies.

An American Family is a character driven novel with a family of imperfect people. Each character has issues, the main focus is Isaac. It was hard to like and feel for him.  This family went through something terrible that no one should experience but Isaac’s faults just kept coming.

The novel is far from perfect: the writing comes off as juvenile and could have been written better.  For example, in the first chapter there were constant mentions of the crime shows that Isaac and Ramie watch and enjoy. I found myself wondering what I got myself into… and then something unexpected happened: I became invested in the story! I am from Georgia as is Baer, so I think part of what drew me in to the novel was hearing about locations I know: Whitlock in Marietta, The Chicken and the Egg (I have not eaten there yet, but know about it).  I kept wondering if ‘The Big Chicken’ was going to make an ‘appearance’ in the novel. (It doesn’t but that would have been awesome!).

I wanted to know how each family member was going to cope and move on from their loss.  Many of the twists were predictable, except for that final twist.  There is a second book called Life After Death which you will want to start once you finish An American Family.  I am listening to it now and should have it done quickly with the review posted soon.

**Special thanks to the author, Jackson Baer for sending me an audio copy to listen to and review via Love Books Group Tours. This was not part of a blog tour.**