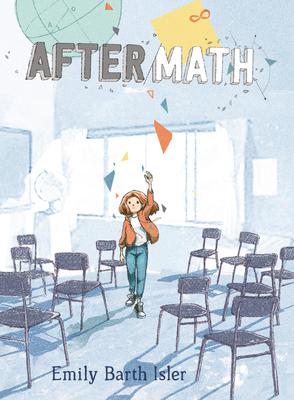 After her brother’s death from a congenital heart defect, twelve-year-old Lucy is not prepared to be the new kid at school–especially in a grade full of survivors of a shooting that happened four years ago. Without the shared past that both unites and divides her classmates, Lucy feels isolated and unable to share her family’s own loss, which is profoundly different from the trauma of her peers.

Lucy clings to her love of math, which provides the absolute answers she craves. But through budding friendships and an after-school mime class, Lucy discovers that while grief can take many shapes and sadness may feel infinite, love is just as powerful.

AfterMath is the third book I have read this year that has dealt with a school shooting before or after the fact. AfterMath is a middle grades novel by Emily Barth Isler and the title has multiple meanings.  The idea for AfterMath came to Isler after the December 2, 2015 shooting at the Inland Regional Center in San Bernadino, California.  She had a baby and a 4-year-old at the time.

Each chapter of AfterMath begins with a Math problem. Our main character is Lucy who is twelve years old and dealing with the death of her younger brother from a rare congenital heart defect.  Dealing with the loss, Lucy’s parents decide to move.  They move to where her parents have a shorter commute, but they also move to a town that has not had new members to the community since there was a school shooting four years earlier.  Not only that, but Lucy is also the age of the students who were victims of the shooting.  The house they move into was also the home of a girl her age who died in the shooting.

Lucy’s adjustment to a new school in a unique situation at an awkward time of life is our story.  There are so many important issues addressed in this book with loss and grief being at the forefront.  PTSD in various forms is also addressed along with bullying.  For one particular student we see the effects of how the sins of one person affect another who had nothing to do with said sin.  We see how everyone experiences their grief in different ways, and the way Lucy does this is not telling anyone at her new school about the recent loss of her brother.

I really liked Lucy and how we see her love of Math despite having problems with learning the concept of Infinity.  We see how she grows over the course of the novel. We also get to know Avery through Lucy, a girl whom everyone at the school avoids. We also see Lucy’s home life with her parents and mysterious math jokes appearing in her room.  Lucy has a good relationship with her math teacher who also teaches her after-school mime class.

This is a great book for those in the middle grades age group.  I listened to the audiobook version which the author also narrated.  She brought a special voice to the novel.  I received an arc copy from the publisher via NetGalley.

AfterMath is definitely recommended for the middle grades ages readers.