Today I help kick off the blog tour for the cookbook Instant Indian by Rinku Bhattacharya. She will be talking about pressure cooking and  Instant Indian.

Discover favorite foods from all over India with the first regional Indian cookbook authorized by Instant Pot!

Rinku Bhattacharya — cookbook author and founder of Spice Chronicles — has put together a collection of 100 authentic recipes that showcase the diversity and range of the foods of India, where every state and region boasts its own unique dishes. Whether you crave takeout favorites or want to be introduced to lesser-known specialties, this cookbook brings the best of India to your table in an instant!

The Instant Pot® lends itself perfectly to Indian recipes, making flavorful, nutritious Indian fare (like simmering-all-day dals, legumes and all manner of curries) in minutes instead of hours. Instant Indian features numerous vegetarian and vegan options , and nearly all recipes are gluten-free.

With step-by-step instructions and color photos throughout, Instant Indian makes Indian cooking easy and fool-proof using all the functions of this popular appliance. 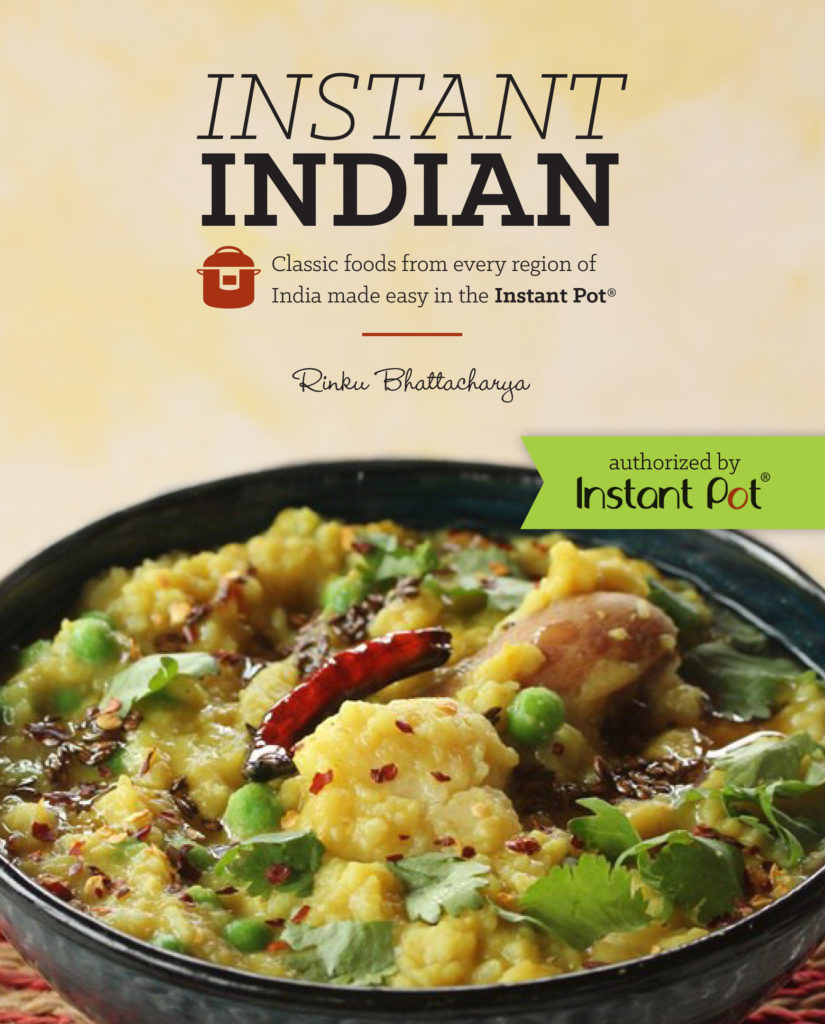 Pressure cookers are a very common element of the Indian kitchen. It is probably one of the few cooking appliances that I have found in the kitchen for multiple generations. My grandmother had one, my mother has one and I have quite a few stove top pressure cookers. The electric pressure cooker aka the instant pot made its way to my kitchen by accident. The model that I started with actually might have been discontinued, yes this is almost three years ago long before it became the trend that it is now. Anyhow, my slow cooker had died on me and when looking for a replacement I liked the idea of something that offered so many different options.

Gradually, I upgraded to the Ultra model of the Instant Pot. Just a note here, there are many brands of electric pressure cookers out there. The Instant pot is the most popular, however the other brands bring you a lot of the same options. The other big advantage of the instant pot is that there are a lot of online communities including my own facebook group where you can discuss about tip, tips and find likeminded potheads as the instant pot groupies.

And then I wrote Instant Indian a visually beautiful collection of over a hundred recipes are classic, beautiful and easy to make. This is an Instant Pot authorized cookbook and the first of its kind focusing on the regional diversity of Indian cooking.

In Instant Indian, there are several things that I do, which makes the book a great resource for Indian food lovers and pressure cooking aficionados in general.

Rinku Bhattacharya (spicechronicles.com) was born in India, and now lives in a house with a vibrant backyard in Hudson Valley, New York with her husband, an avid gardener, and their two children. Rinku’s simple, sustainable approach to Indian cooking is showcased on her blog, Spice Chronicles, and in her Journal News column “Spices and Seasons.”

Rinku has been teaching recreational cooking classes for the past nine years, and works extensively with local area farmer’s markets on seasonal demonstrations and discussions. Rinku is also the author of The Bengali Five Spice Chronicles (Hippocrene Books, 2012), winner of the Gourmand World Cookbook Awards 2013 for Best Indian Cuisine. She writes for the Poughkeepsie Journal, the Journal News, and several online sites, and is a frequent guest on CT Style TV.