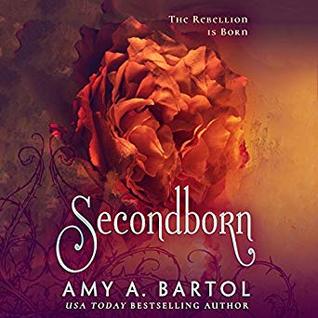 Firstborns rule society. Secondborns are the property of the government. Thirdborns are not tolerated. Long live the Fates Republic.

On Transition Day, the second child in every family is taken by the government and forced into servitude. Roselle St. Sismode’s eighteenth birthday arrives with harsh realizations: she’s to become a soldier for the Fate of Swords military arm of the Republic during the bloodiest rebellion in history, and her elite firstborn mother is happy to see her go.

Televised since her early childhood, Roselle’s privileged upbringing has earned her the resentment of her secondborn peers. Now her decision to spare an enemy on the battlefield marks her as a traitor to the state.

But Roselle finds an ally—and more—in fellow secondborn conscript Hawthorne Trugrave. As the consequences of her actions ripple throughout the Fates Republic, can Roselle create a destiny of her own? Or will her Fate override everything she fights for—even love?

Secondborn has an interesting concept about birth order and where you fall in society. And you better not have a third child without permission! (Only firstborn’s can have children).Roselle is our protagonist and she is the second born child to a very elite mother, a mother who could care less about Roselle.  Roselle even grew up on television and she is well known.  But once her 18th birthday hits all life changes for her, she has to become a part of the army.

This is a coming of age story and Roselle’s fight to survive.  There is also a love interest thrown in which I could have done without, but it becomes important later in the book and I am sure for the future books of the series.

Secondborn is similar to Divergent with the different sections of society (in Divergent you have a choice) with a female protagonist becoming who she is meant to be with a love story with a hottie thrown in.  Ultimately it was just an ok read for me as it did not really add to the YA/Dystopian genre.  I’ll stick with the Divergent series which I really enjoyed, despite the unpopular ending that I saw coming and actually enjoyed.