Today’s First Line Friday is one I read many years ago when it was first published.  This was way back on November 6, 2001. I loved the cover and remember enjoying the book! It’s a quick read at just 177 pages! Then there was a very loose adaption of the book made into a film called Christmas with the Kranks in 2004 which stared Tim Allen and Jamie Lee Curtis.

The gate was packed with weary travelers, most of them standing and huddled along the walls because the meager allotment of plastic chairs had long since been taken. 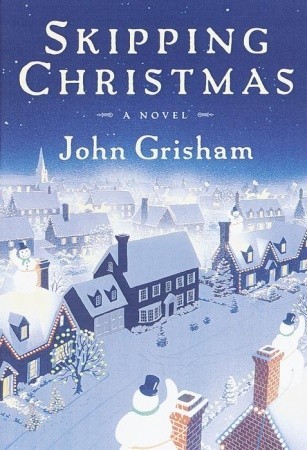 Imagine a year without Christmas. No crowded malls, no corny office parties, no fruitcakes, no unwanted presents. That’s just what Luther and Nora Krank have in mind when they decide that, just this once, they’ll skip the holiday altogether. Theirs will be the only house on Hemlock Street without a rooftop Frosty; they won’t be hosting their annual Christmas Eve bash; they aren’t even going to have a tree. They won’t need one, because come December 25 they’re setting sail on a Caribbean cruise. But, as this weary couple is about to discover, skipping Christmas brings enormous consequences–and isn’t half as easy as they’d imagined.

A classic tale for modern times, Skipping Christmas offers a hilarious look at the chaos and frenzy that have become part of our holiday tradition.

A Time to Kill by John Grisham

The life of a ten-year-old girl is shattered by two drunken and remorseless young men. The mostly white town of Clanton in Ford County, Mississippi, reacts with shock and horror at the inhuman crime. Until her black father acquires an assault rifle and takes justice into his own outraged hands.

For ten days, as burning crosses and the crack of sniper fire spread through the streets of Clanton, the nation sits spellbound as young defense attorney Jake Brigance struggles to save his client’s life–and then his own.

This is a story that most everyone knows. I would think most have seen the movie which stars Matthew McConaughey, Sandra Bullock, and Samuel L Jackson. It is a great but also hard to watch movie which deals with a father’s decision on and the consequences of this actions. As a parent, what would you do to the men who brutalized your daughter?

I own this book and hope to one day read it and see how it compares to the film.