Think animals are all well-behaved? Think again. These thirteen play dirty. But they’re about to get caught!

A fish who deceives her prey with a light dangling in front of her mouth? A bird who leaves her eggs in another bird’s nest to be raised? A monkey who shouts ‘Danger’ to scare away the others from the fruit? Meet some of the animal kingdom’s most wanted criminals! Slippery Slick, Queenie the Meanie, Lil’ Cupid — they’re all here in this hilarious book of animal case files that include rap sheets, mug shots, reports of criminal activity and more. All thirteen animals stand accused of playing dirty, but now that Detective X is hot on their trail, their criminal days may soon be behind them!

Author Heather Tekavec offers an original approach to investigating animal behavior, with a fun storyline built on hardcore facts. Paired with Susan Batori’s cheeky illustrations, this is a laugh-out-loud read that explores fascinating animal science. Each animal ‘criminal’ gets a spread that’s filled with facts about the animal’s characteristics, including distinguishing features, diet, life span, habitat and more, as well as a description of the animal’s ‘bad’ behavior and the reason behind it. This book offers direct STEAM links to life science curriculum, particularly lessons on the characteristics of living things. The underlying premise of the book also offers the opportunity for discussions on what it means to play fair in the world.

This is a highly entertaining picture book that the kids will love (and mom and dad too!) If your child loves animals they will love this book and even learn something about the different animals featured.

The illustrations really enhance the facts and fun to the book, going with the theme of these ‘bad animals’ including the last one who is the ‘Most Wanted’ and also has the worst crime….

The only critique I can give is that I would have loved a photo of the actual animal to go along with the illustrations so children can see what these creatures actually look like.

This one was a pleasure to read and review and many thanks to the publisher Kids Can Press for granting me an e-arc.

Today I am part of the Blog Blitz for Sue Wickstead’s children’s picture book Jay-Jay the Supersonic Bus! I am sharing my 5 star review. For those of you in the UK there is also a giveaway going on!

Jay-Jay the bus is rescued from the dirty scrap yard, where he was sadly gathering dust and cobwebs. Feeling nervous yet excited, he is taken to an airport where he is magically transformed into a ‘Playbus’ full of toys, games and adventure.

A fictional tale based on a real-life bus ‘Supersonic’, which flew in the imaginations of the many young children who visited it. 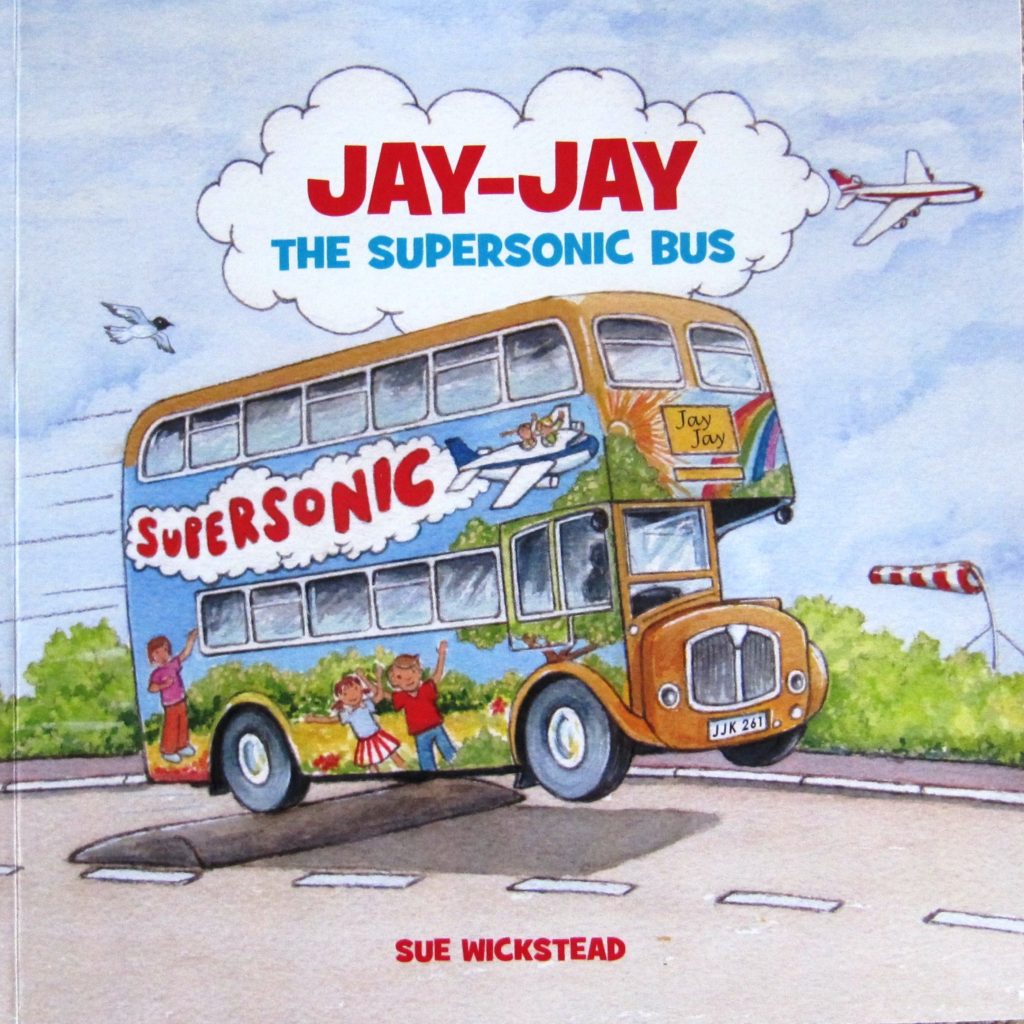 Jay-Jay the Supersonic Bus is a colorful children’s picture book that is surprisingly based on fact.  Jay-Jay is JJK261 and he has been forgotten in the scrap yard until one day some kids briefly play on him. Later on, he gets new lease on life as someone buys ALL of him and not just pieces of him!  His future is much brighter now!

This is a short feel good children’s book that informs you of the ‘real’ JJK261 and his adventures.  The story flows well and and has colorful pictures that enhance the story.  It is not long and I can see small children enjoying this book and will be ready for more of Jay-Jay and his many adventures.  This is a great beginning to Wickstead’s Jay-Jay books.

On a personal note: My grandmother was a bus driver and the part of the book with the kids playing on Jay-Jay brought back fond memories of my sister and myself playing on her school bus and even riding on the bus as my grandma picked up kids for school.  Thanks for bringing up those memories Sue!

**For those of you in the UK: Jay-Jay the Supersonic Bus will be 99p until 22nd April**

A free 3D bus which can be claimed via web site ‘Enquiry button using ref code JJay at www.suewickstead.co.uk

Additional bus models and books also offered as a promotion on request. 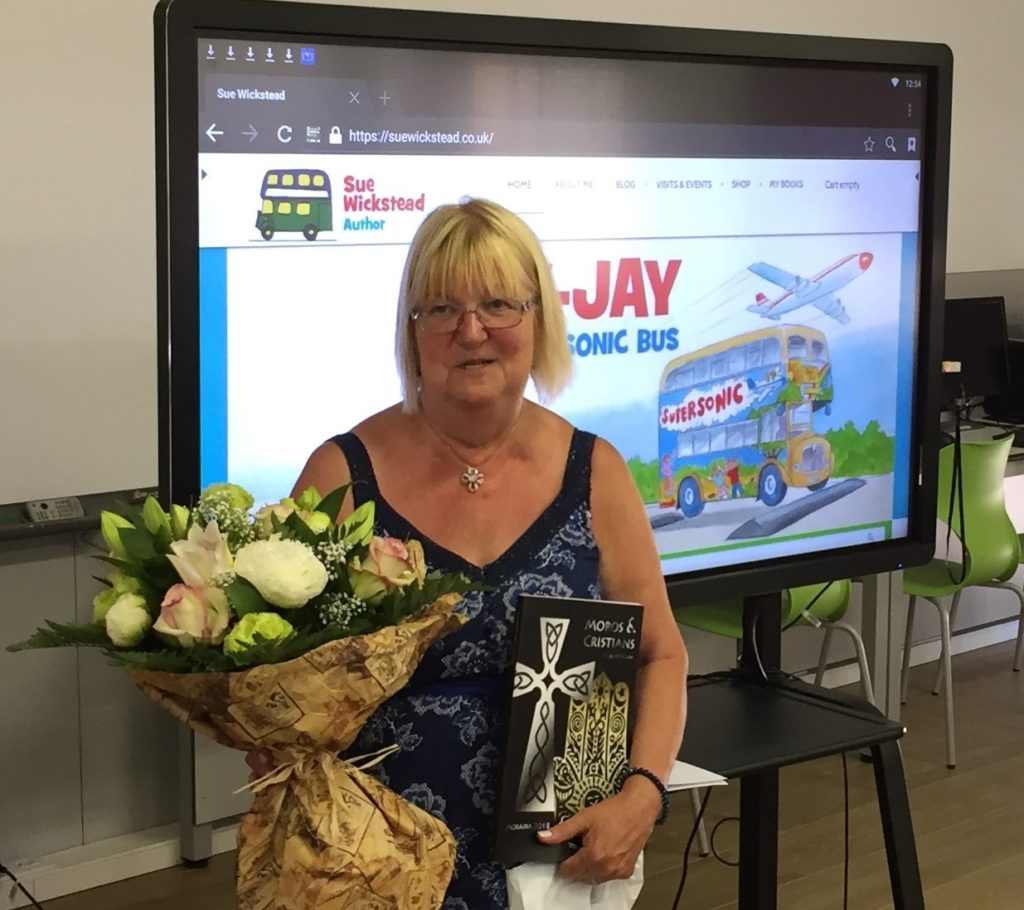 I am a teacher and an author and have currently written six children’s picture books with a bus theme.

For over 20 years, alongside my teaching career, I worked with a Children’s Charity, The Bewbush Playbus Association, which led me to write a photographic history book about it.

I soon found that many children had never been on a bus before, let alone a ‘Playbus’ and they wanted to know more. I decided to write a fictional tale about the bus, his number plate JJK261 gave him his name.

‘Jay-Jay the Supersonic Bus,’ came out in print in 2014. It is the story behind the original bus and is his journey from a scrap-yard to being changed into a playbus for children to play in. From Fact to fiction the bus journey continued.

This story has now been followed by five more picture books.

I also undertake events and author bookings and love to share the story. There are also a few more stories in the writing process, with links to real events and buses.

The story has been read in many schools in the south-East of England, where I teach as a cover teacher, it is always well received and certainly different.

Win Jay-Jay and the Island Adventure 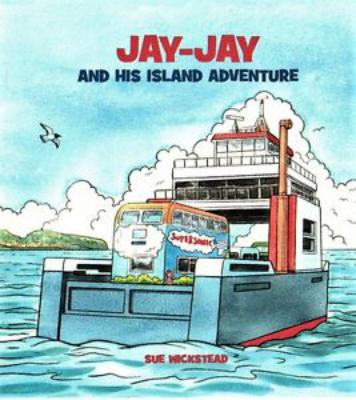