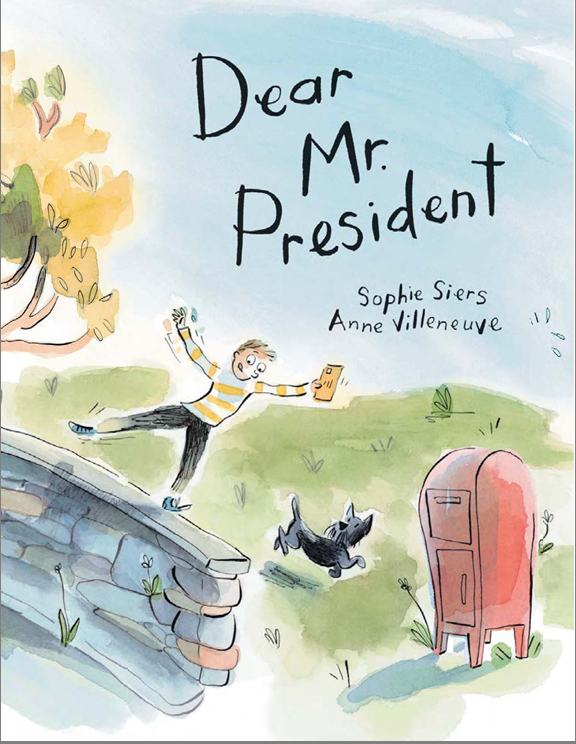 Sam has a problem. He has to share a room with his older brother and things aren’t easy. When Sam sees the president on TV talking about `the wall’ he realizes a solution is at hand! But who knew that planning a wall could be so tricky? The letters that follow invite conversations about the question of living with others in times of conflict. The voice of the young boy shows adults something of the nature of peace and good relationships.

It does not matter your stance, but it is a sad time in our country when political issues become children’s picture books. Fortunately, this will somewhat help small children to understand about the proposed ‘wall’. Please note that if you are a Trump or wall supporter then this book will not be for you.

Sam and his older brother share a room and like true siblings, it causes issues between them.  One night Sam sees the President on tv talking about building ‘the wall’ and it sounds like a great idea to him! In fact he starts writing the President about his situation.  Sam believes in one position about his wall and by the end of the book he is of  the opposite opinion.

The book shows how communication and getting along is important to solving issues, even one as small as sharing a bedroom (which would actually be a huge deal to the children involved!)

The book also teaches children about some real walls in the world: The Great Wall of China, Hadrian’s Wall in England and the fall of the Berlin Wall. The pictures throughout the book definitely add to the story!

I tend to stay away from politically charged books, which this appeared to be, but the fact that it was a children’s picture book had me curious as to how this story played out. I am glad I had the opportunity to read and review it.

I received a copy via NetGalley from the publisher.

The Type N series is supposed to be a trilogy. The final book has not been written yet. Type N is the first book I read by Michelle Onuorah. I have since read all of her novels. I think I just came across Type N searching on Amazon one day. The cover is simple and what drew me to the book. Then I read the description and I HAD to read the book! Both books in the series are short, and fast paced. I never wanted to put my kindle down as I read them!  I don’t give out 5 star reviews like candy as some reviewers do, I have to be blown away to give a 5 star review. I loved both of these books! Both books received a 5 star review from me.   **Both books in the series that have been written will be featured today.

What would you do if your blood could cure cancer? 18-year-old Nicolette Talloway is the target of a worldwide manhunt because of her blood type. When delivered via transfusion, her blood heals any ailment a human has and strengthens their immune system. The cure for cancer, HIV/AIDS, and other previously incurable diseases is running through her veins. Her blood is the only type of its own known to exist. As a result, Nicolette is no longer a private citizen but is the world’s most wanted and sought-after human being. As she runs from government appointed agents, the question begins to shift from what her blood can do to why she has it. Is this a gift from God? And if it is, what does he want her to do with it?

***Please note there is occasional cursing, violence, and references to spirituality within this work of fiction. Reader discretion is advised.

It grabs you from the beginning. So much of it seems like that is what would happen if a we found a person who actually had curative blood. There were two parts of the book that did not seem realistic to me: (BEGIN SPOILERS: When Jason’s friend (I forget her name as I write this) taught them to fight- I thought they picked it up and were too good too quickly. And the bigger unrealistic thing to me was when Jason took Nicolette to Disneyland because she was stressed- if you are on the run from the government you wont take a side trip like that! END SPOILERS)

Regardless of what I mentioned above, I REALLY LOVED this book! It was just too short (150 pages) the good thing about being short like that is that there wasn’t any space to drag. I look forward to the sequel once the author finishes it!!!!!

They took her love…and gained her enmity.

Nicolette Talloway has finally found happiness. As the only person in the world whose blood can cure any disease, she has managed to give her blood on her own terms without any interference from the government. Sure that she has found a permanent solution, she and the love of her life, Jason, settle into a new beginning together.

That is…until they are found.

There is a new President in charge and a new agenda written for Nicolette’s blood – whether she wants to play ball or not. The problem is: they’ve pushed her too far. And when she finally decides to take matters into her own hands, Nicolette will no longer run from authorities or give her blood but will stand her ground and start Taking Names.

The second in the Type N Trilogy and it did not disappoint! Taking Names is another fast paced book that I did not want to put down! I only wish I had been able to read it as quickly as I did with Type N. I like seeing how Nicolette grew from the child she was at the beginning of Type N to now. I can’t wait to see where Michelle Onouorah goes with the final book in the series.

I had in my head that the ending was going to go in one of two ways. Both would have been good cliffhangers in my opinion. And one of my thoughts was how she did end the book.

The spiritual elements are well done as well with an important issue Nicolette faces: Forgiveness. Michelle has said that she is a Christian and that is in her books, well done, and not “in your face”.

I can’t wait for the final in the series! I can’t wait to see how this story ends for all the characters. Great job Michelle!!!!

**I was sent an ARC in exchange for a review from Michelle Onouorah.