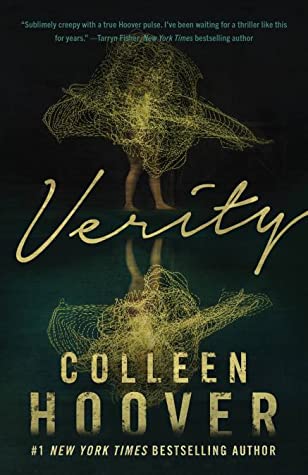 Lowen Ashleigh is a struggling writer on the brink of financial ruin when she accepts the job offer of a lifetime. Jeremy Crawford, husband of bestselling author Verity Crawford, has hired Lowen to complete the remaining books in a successful series his injured wife is unable to finish.

Lowen arrives at the Crawford home, ready to sort through years of Verity’s notes and outlines, hoping to find enough material to get her started. What Lowen doesn’t expect to uncover in the chaotic office is an unfinished autobiography Verity never intended for anyone to read. Page after page of bone-chilling admissions, including Verity’s recollection of what really happened the day her daughter died.

Lowen decides to keep the manuscript hidden from Jeremy, knowing its contents would devastate the already grieving father. But as Lowen’s feelings for Jeremy begin to intensify, she recognizes all the ways she could benefit if he were to read his wife’s words. After all, no matter how devoted Jeremy is to his injured wife, a truth this horrifying would make it impossible for him to continue to love her.

Verity is my first ‘CoHo’ novel, though I have several more of hers on my TBR. Hoover is known for her romances, but this one is far from that: Verity is an extremely dark thriller and more. It is very different from her other novels, and I wish she would write more like Verity!

Verity is a novel where it is best to go in knowing as little as possible.  To say much will be giving things away.  What you need to know is that it is a dark, intense, disturbing novel that pulls you in from the beginning with a gruesome death. The reader will have no idea what they are getting into by starting this novel and from the start this one pulls no punches.  I’ll just say this: I have read a few novels with dark characters (Eva in We Need to Talk About Kevin should have never become a mother and Amy Dunne in Gone Girl.. Well… Let just say I wanted to throw my kindle with that one…) These characters are NOTHING compared to Verity!

We have two POVs in Verity: Lowen which is present day, and Verity’s memoir which is beyond disturbing.  I can’t say enough how dark this novel is and it will be too much for some. But… in addition to the disturbing nature this novel will be compulsive and addicting. As you get closer to the end you don’t want to stop reading.  If I had been reading the physical book I bet those pages would have kept turning!   There was a part I had figured out, but not quite the why behind it.  And then we have that epilogue! The reader is left to determine their own thoughts at the end of the novel, and I still haven’t decided for myself what I want that to be!

I don’t know what it means for both Hoover and myself: How was Hoover able to come up with/write a novel so twisted and that I really enjoyed it!  My message to CoHo is this: PLEASE write more thrillers and I promise to read more of your romances!

Verity is extremely recommended if you can handle the content. 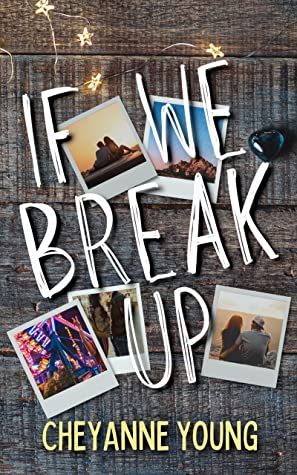 Honey Blackwell’s high school sweetheart is getting on her nerves. Like everyone else in their small town, Luca thinks he and Honey should take over his family business and live happily ever after. Honey wants more. That’s why she secretly applied to her dream college in Colorado. When she gets in, Luca is devastated. After the biggest argument of their lives, Honey discovers a scientific journal that claims people find their true soul mate after being in five relationships. She poses this experiment to Luca, and soon they’ve made a pact to break up, go on five dates with different people, and then decide if they’re truly meant to be together forever. It’s science, after all, and science has never let Honey down.

Finding people to date is awkward, exciting, and a little futile. None of Honey’s dates are soul mate material, which is starting to prove Luca’s hypothesis—that they are already soul mates. When the rest of STEM club comes down with food poisoning, Honey finds herself at the weekend science convention with Mason, her mortal enemy. Mason, the guy who also got into her dream college. The guy she just accidentally kissed.

She likes him. But she loves Luca. As she struggles to choose between the picture-perfect future she already has and the temptation of the unknown, she learns that love isn’t a scientific equation. It’s a choice. And now Honey must make hers.

I loved If We Break Up!   This is a YA contemporary novel with a simple premise to it: Honey (Yes, that is her name!) and Luca have grown up together their whole lives and both sets of their parents were high school sweethearts and all work together. Honey and Luca are ‘the couple’  at their high school and their whole lives are already planned out. But…. Honey has doubts. Then she finds an article that says you find your soulmate after five relationships.  Honey and Luca decide to mutually break up and go on five dates and then decide if they want to get back together.

But finding five dates is harder than Honey planned on.  And she did not plan on the feelings she felt seeing Luca with other girls… Then Honey starts seeing her long term ‘enemy’ Mason in a different way after a weekend together for a STEM club event.

What will Honey decide to do????

I know what my opinion of Luca and Mason both were and what direction I wanted Honey to go in.  You think the novel will end up going in one direction and then Young pulls a jab in there and throws you off.  This happened a few times for me as the novel went in directions I was not expecting, which includes family drama.

If We Break Up takes place in Texas and an earlier chapter brings us to Dinosaur Valley State Park. I really enjoyed this chapter because my sister lived in Texas for a few years and when I visited her we went there. I really enjoyed remembering that trip!

The ending was absolutely perfect!  This novel ended the way it needed to and I adored it.  This is a coming-of-age novel and Honey does learn about herself by the end.  Will Honey choose the known with Luca or go for her dream? Or will it be a little bit of both?? You must read If We Break Up to find out!

Many thanks to the author Cheyanne Young for sending me an arc to read and review!

If We Break Up is highly recommended!

Here are some picture of my sister and myself at Dinosaur State Valley Park: 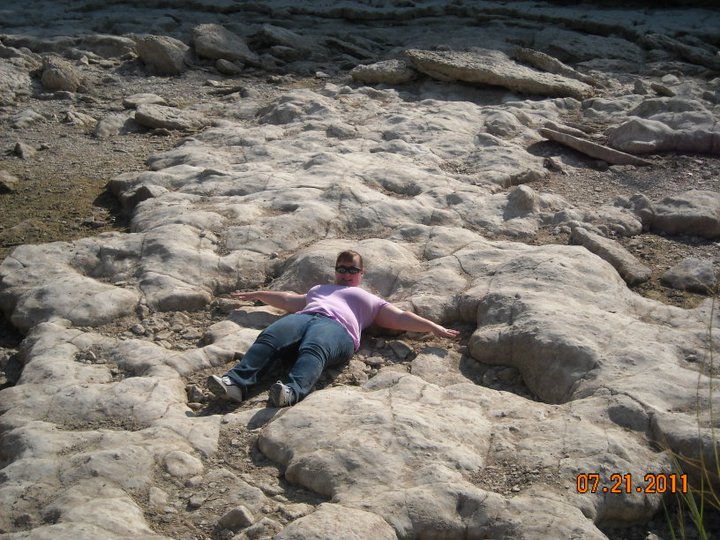 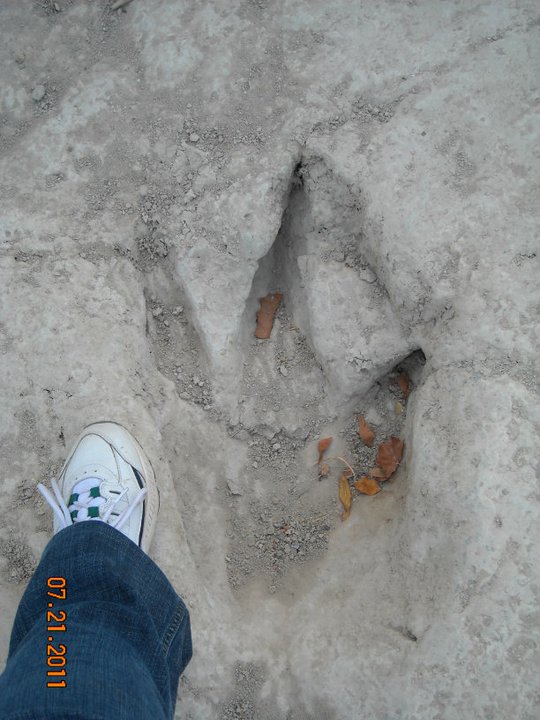 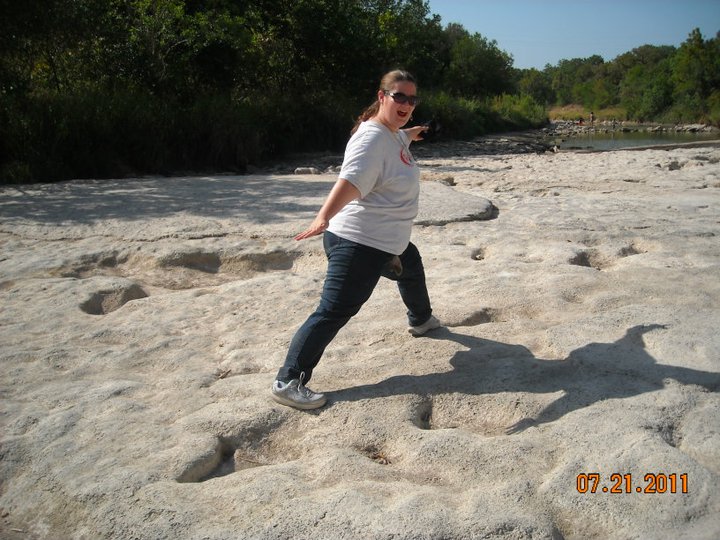 **You can also directly order a **signed copy** of If We Break Up from the author via her Etsy Shop! If you decide to order from her, let her know Jessica’s Reading Room sent you! 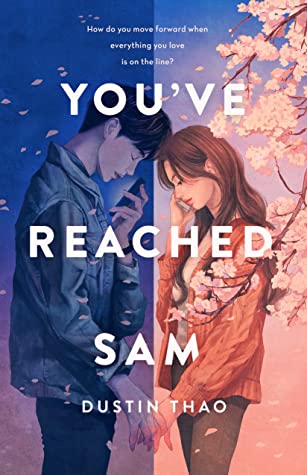 How do you move forward when everything you love is on the line?

Seventeen-year-old Julie has her future all planned out—move out of her small town with her boyfriend Sam, attend college in the city, spend a summer in Japan. But then Sam dies. And everything changes. Desperate to hear his voice one more time, Julie calls Sam’s cellphone just to listen to his voicemail. And Sam picks up the phone.

What would you do if you had a second chance at goodbye?

Filled with a diverse cast of characters, the heartache of first love and loss, and the kind of friends that can get you through anything, plus a touch of magic, You’ve Reached Sam will make an instant connection with anyone looking for a big emotional romance of a read.

You’ve Reached Sam is a novel that deals with something we all have dealt with: loss and grief. Whether the loss is a boyfriend such as this novel or a family member which includes pets, we have all experienced grief and Thao deals with this in a superb way.  Julie has lost Sam due to a car accident and she feels partly responsible. Julie and Sam had planned their life together and now that is gone. Julie experiences grief in many ways, and while she is facing it she feels the needs to hear Sam’s voice so she calls him.  And instead of it going to voicemail Sam himself answers.

Neither one really knowing how they in fact have this connection or how long they will have it, in some ways Julie has Sam again all to herself.  But will this unknown connection keep her in the past and from moving on without Sam?

We do get the beginning of their relationship through flashbacks, so we see it evolve over time.  There were some situations brought in dealing with Sam’s music that did not have a conclusion for me. I was wanting more from that side story to come into play, but it was left open.

The last chapter and Epilogue made this novel for me.  I had some issues with Julie, and found closure with the ending Thao gave us along with Julie and Sam. Fair warning:  If you have recently lost someone, I would stay clear of this novel until you have come to terms as best you can with your grief. Grief can be an overwhelming thing, and Thao shows us this with multiple characters and situations and how one person reacts with their grief affects others.