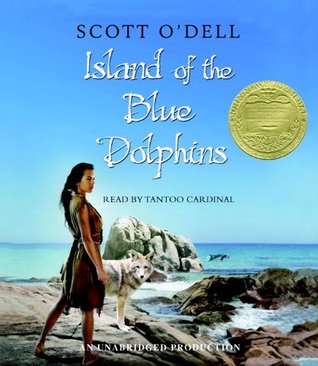 In the Pacific there is an island that looks like a big fish sunning itself in the sea.  Around it, blue dolphins swim, otters play, and sea elephants and sea birds abound.  Once, Indians also lived on the island.  And when they left and sailed to the east, one young girl was left behind.

This is the story of Karana, the Indian girl who lived alone for years on the Island of the Blue Dolphins.  Year after year, she watched one season pass into another and waited for a ship to take her away.  But while she waited, she kept herself alive by building a shelter, making weapons, finding food, and fighting her enemies, the wild dogs.  It is not only an unusual adventure of survival, but also a tale of natural beauty and personal discovery.

While reading the Hatchet series by Gary Paulsen, I decided to listen to another book that I listened to in school: Island of the Blue Dolphins by Scott O’Dell. I remember enjoying it when I was younger and watching a long movie version at what seemed like 2am while my family was asleep.  Other than an individual living by themselves and working to survive, these are very different books.  Island of the Blue Dolphins is loosely based off of a true story, and our story is about Karana who is left to fend for herself on the island where her tribe lived.  The rest of the tribe was taken away by boat, and Karana maintained hope that they would return for her someday.  Over time she comes to terms of being alone and learning to fend for herself.  Part of that is going against what she was taught: that women should not make weapons.  Well if she didn’t, she wouldn’t have survived on her own!  She makes friends with a dog that she names Rontu. (If I ever have another dog, I will be tempted to name him Rontu as I just loved that name!  And it’s a literary name!)

Eventually Karana is rescued after many years and learns what happened to her tribe.  For me, after the more intense young adult novels of the Hatchet series with Brian constantly struggling to survive, Island was less intense.  Maybe down the road I will read it again.  Maybe it was the narrator as I listened to the novel, or maybe I just lost something by listening versus actually reading it myself.  It could also be that this is written for the middle grades age group and I am far from that group.  I would definitely recommend it for younger girls so they can see that girls can do what they need to do to survive a challenging situation. It is a girl empowerment book in that way.