Olivia Shaw has been missing since last Tuesday. She was last seen outside the entrance of her elementary school in Hunts Point wearing a white spring jacket, blue jeans, and pink boots. I force myself to look at the face in the photo, into her slightly smudged features, and I can’t bring myself to move. Olivia Shaw could be my mirror image, rewound to thirteen years ago. If you have any knowledge of Olivia Shaw’s whereabouts or any relevant information, please contact…

I’ve spent a long time peering into the faces of girls on missing posters, wondering which one replaced me in that basement. But they were never quite the right age, the right look, the right circumstances. Until Olivia Shaw, missing for one week tomorrow. Whoever stole me was never found. But since I was taken, there hasn’t been another girl. And now there is.

This is yet another thriller that had an interesting premise that failed to deliver, despite the prologue giving a great beginning.  Our protagonist is Ella Santos who now goes by the name of Lainey Moreno, who was kidnapped at a young age and then finally gets away.   The first twist happens early on and ok, yeah, I can go with it, but then in my opinion Laine gets involved in the case way over her head of this new missing girl.

Both the author and narrator showcase how much of a very flawed person Ella/Lainey is. Not every ending is happy and Laine’s is far from happy. Her past shaped her whole life. It does make you wonder about people who are held prisoner for long time spans, how they are after the fact and leave the spot light.

This is a very dark novel that deals with heavy themes (rape, drug abuse, kidnapping, etc) with several flawed characters. Don’t expect a happy ending.  The final twist was unexpected, but left no satisfaction at the end. 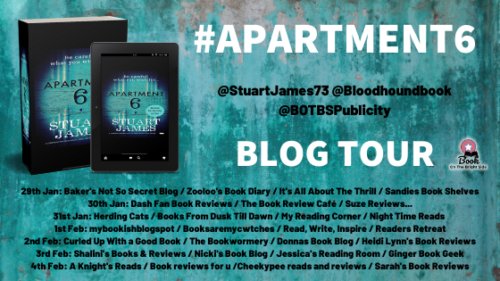 Today I am sharing my review as a part of the blog tour for Apartment 6 by Stuart James.

Be careful what you wish for…

When Meagan was five years old her mother was viciously attacked and murdered.

Now an adult, she herself is the victim of an abusive relationship. Meagan is desperate to escape but doesn’t have the courage to leave.

So, when Meagan meets Oliver, a decent guy who is on the rebound after a failed relationship, the two strike up a connection. But when Meagan confesses that her husband is abusive, it leads Oliver down a dark and dangerous path.

Just how far would you go to protect someone?

This is my first book from James and it will not be my last! He shows us the pure terror that is physical and verbal domestic abuse. What makes it worse is that the abuse occurs over two generations.  Apartment 6 was at times difficult to read, and if you have experienced domestic abuse of any sort, this novel may be a trigger for you.

From the first line, I was drawn into Apartment 6 and that first chapter is incredible. The chapters alternate between twenty years ago and present day and the past definitely affects the present.  Megan is the focus of our novel and in present day she meets Oliver and then together they go down a path that many may not expect.  Apartment 6 really does show the dark side of human nature, in both expected and unexpected ways.  Nearly all the characters are unlikeable in some way, but this adds to the story, and does not take away.

The less you know about Apartment 6 the better.  I did figure out all but one twist, which was about ¾ into the novel, and that twist I never even saw coming. It was a complete shocker to me!  If I had not figured out the other twists I can imagine that I would have been completely blown away.

If you enjoy thrillers, do give Apartment 6 a try, it is currently just .99 on kindle!

**Many thanks to Book on the Bright Side and the publisher Bloodhound Books for granting me an arc copy as a part of the blog tour.** 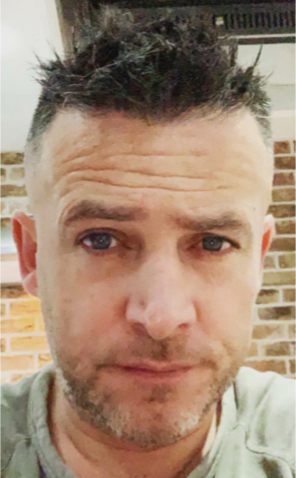 I have always loved scary stories, especially ones that shocked me, left me terrified, looking under my bed or in the wardrobe before going to sleep.

There was just a fantastic buzz whenever I watched or read something that took my breathe away.

I remember going to my nan’s house in Ireland as a youngster with my mother and sister, on the West Coast, staying in a cottage, surrounded by miles of fields and my family sitting around the table in the kitchen at night telling ghost stories. Going out and exploring derelict farmhouses in the middle of nowhere. I remember clearly the field at the end of the road was supposed to be haunted by headless nuns.

My cousins often remind me of the great times we had, frightening each other and running for our lives whenever we’d see something that didn’t look right.

This is why I love nothing more than to tell a story.

I started writing two years ago, penning The House On Rectory Lane.

To me, the thought of going to a house in the middle of nowhere, upping and leaving a busy town and moving to the country is something that scares lots of people and me: the seclusion, the quiet, the darkness. That’s what inspired me to write my first novel.

My second thriller is called Turn The Other Way.

I have multiple stories running, past and present:
A family who want answers from the surgeon responsible for their daughter’s death.
A young woman looking for her parents after they go missing from a party.
A couple driving home and hearing screams for help from the back of the van in front of them.
A serial killer on the loose in North London, dragging victims off the street.

I’m so grateful when people not only read my thrillers but also take the time to get in touch and leave a review. To me, that is the greatest feeling, hearing from people that have enjoyed my work. I know then that I’m doing something right.

I’m currently working on my new thriller, Apartment Six, which will be released 29th of January.

I’m 45, married and have two beautiful children. Currently, I’m a full-time plumber but would love nothing more than to make a living from my writing.

I hope I write stories and people continue to enjoy them for years to come. That would be completely amazing and a dream come true.