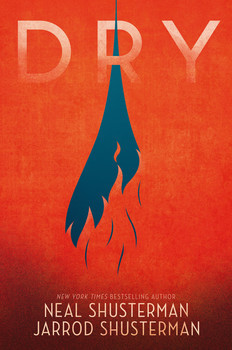 When the California drought escalates to catastrophic proportions, one teen is forced to make life and death decisions for her family in this harrowing story of survival from New York Times bestselling author Neal Shusterman and Jarrod Shusterman.

The drought—or the Tap-Out, as everyone calls it—has been going on for a while now. Everyone’s lives have become an endless list of don’ts: don’t water the lawn, don’t fill up your pool, don’t take long showers.

Until the taps run dry.

Suddenly, Alyssa’s quiet suburban street spirals into a warzone of desperation; neighbors and families turned against each other on the hunt for water. And when her parents don’t return and her life—and the life of her brother—is threatened, Alyssa has to make impossible choices if she’s going to survive.

Between reading Hanna Jameson’s The Last and now Dry and watching ‘Walking Dead’ type shows/movies I now want to stock up on everything and be ready for the end of civilization! Especially water: You cannot live without water after a few days.  Dry has totally freaked me out and I want to be prepared!  Everything about Dry felt real to me. It takes place in southern California (OMG, this happened in the USA!) and the water has run completely out.  The desperation of everyone is captured brilliantly and we see how people become in impossible situations.

Our protagonists are young adults, so they will come with immaturity, but I was completely drawn into the story! You don’t know what is going to happen and who will die or live.  For a while I thought we were going to have a ‘Mist movie type ending’ and OMG, that would be jaw dropping as it is so realistic and not a happy ending.

Shusterman does such a wonderful job making you think about things long after you have finished his books.  He continues this with Dry.  Dry has you thinking about what you will do and who will you become when the Tap-Out eventually happens.

Hawthorn wasn’t trying to insert herself into a missing person’s investigation. Or maybe she was. But that’s only because Lizzie Lovett’s disappearance is the one fascinating mystery their sleepy town has ever had. Bad things don’t happen to popular girls like Lizzie Lovett, and Hawthorn is convinced she’ll turn up at any moment-which means the time for speculation is now.

So Hawthorn comes up with her own theory for Lizzie’s disappearance. A theory way too absurd to take seriously…at first. The more Hawthorn talks, the more she believes. And what better way to collect evidence than to immerse herself in Lizzie’s life? Like getting a job at the diner where Lizzie worked and hanging out with Lizzie’s boyfriend. After all, it’s not as if he killed her-or did he?

Told with a unique voice that is both hilarious and heart-wrenching, Hawthorn’s quest for proof may uncover the greatest truth is within herself.

Hawthorn is a high school senior loner and I personally pictured her dressed like a goth. Hawthorn is misunderstood like goths can be in that kind of life. She pretends things do not bother her, or that she doesn’t care about things when she actually does. One day Lizzie Lovett disappears. She is three years older than Hawthorn, was the popular teenager when she was in high school, and her older brother had dated Lizzie briefly.

Everyone at school comes up with their own theories as to what happened to Lizzie, including Hawthorn. She also beings to immerse herself in Lizzie’s life which includes getting a job where Lizzie works and beginning to hang out with Lizzie’s boyfriend. Hawthorn does this so much it becomes an obsession. I found it odd, especially since Hawthorn barely knew Lizzie. I couldn’t help but wonder why she was doing this. At some times, it seemed like she wanted to become Lizzie.

As you read in the book description above, Hawthorn’s theory about Lizzie is described as ‘absurd’. It truly is absurd, much to the detriment of the book, especially for a book in the YA (Young Adult) contemporary genre. Hawthorn seemingly believes her theory and word about her theory gets around town.

The only reason I kept reading The Hundred Lies of Lizzie Lovett was that I really wanted to know what happened to Lizzie. I did not have any kind of attachment to Lizzie. We do find out the answer to what happened to her. Once we find out what happened, the book and Hawthorn take a different turn. The last 13% of the book deals with an important issue for teenagers. If only the rest of the book was like the last 13%. That last 13% held my attention more than the other 87%.

I can not recommend The Hundred Lies of Lizzie Lovett.

I received an arc copy from NetGalley.