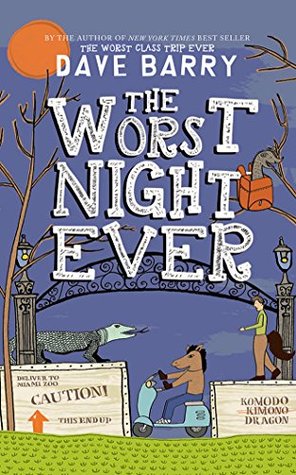 Last year, Wyatt Palmer was the hero of middle school, having foiled a plot against the president of the United States. But now he and his friends are in Coral Cove High School-home of the Fighting Conchs-and Wyatt is no longer a hero: He’s just another undersized freshman, hoping to fit in, or at least not be unpopular. Things start to go wrong when Matt Diaz, who is Wyatt’s best friend but also unfortunately an idiot, decides to bring his pet ferret, Frank, to school. Through an unfortunate series of events Frank ends up in the hands of the Bevin brothers, who are the most popular boys at Coral Cove High, but are also, as Matt soon discovers, the nastiest. When Wyatt and Matt try to get Frank back, they concoct a plan to attend a party for the cool clique at the Bevin’s waterfront mansion and stumble onto the Bevin family’s dark and deadly secret. That’s when Wyatt learns that some things are worse than being unpopular in high school. MUCH worse.

I listened to The Worst Class Trip Ever at the end of last year and it was a very pleasant surprise (My review is here). I was able to listen to The Worst Night Ever which is the second book in the series. Wyatt and his friends are back for another adventure and this time they are in their freshman year of high school. Wyatt’s friend Matt decides to bring his pet ferret Frank to school, which leads them on a crazy series of events. They stumble upon a dangerous secret involving the family of the biggest bullies of the school.

Worst Night Ever was enjoyable, but there was not as much magic to it that Worst Class Trip had.  The beginning dragged for me, and it all just seemed too silly.  Even though they are in high school now, Wyatt and friends still came off as middle schoolers.  Maybe this is just ‘boy mentality’/ lack of maturity.  Everything dealing with Frank the ferret just did not work for me, though it all led up to Wyatt’s discovery. When it got to the ‘dangerous secret’ I became interested in the story.

These stories are not believable at all (in a good way); this would be enjoyed by and appropriate for middle schoolers, especially boys.  The narrator Todd Haberkorn portrays Wyatt perfectly. I would like to see what adventure Wyatt and his friends find themselves in next.  I can’t see any adventure being better than the first.

The Worst Night Ever is recommended.