Today I am spreading the word about an upcoming release: This Poison Will Remain.  Publication day for this one is August 20, but thanks to the publisher  Penguin Books, I am having a giveaway where you can win a copy if you are in the USA! 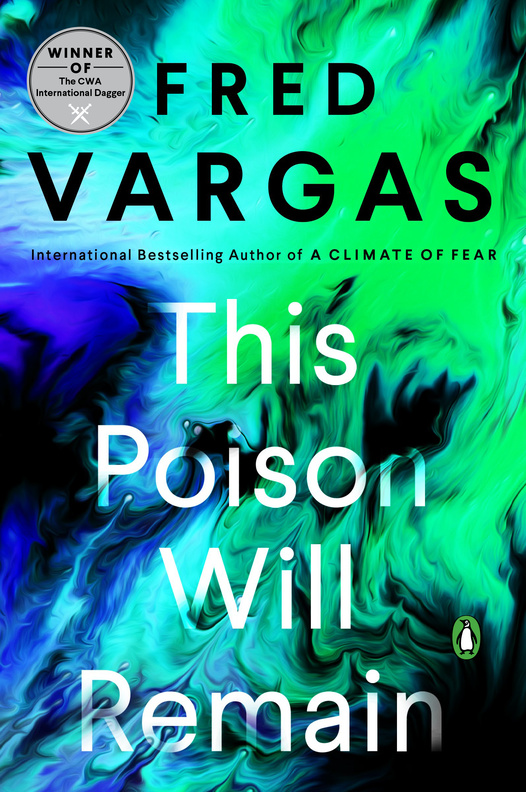 In THIS POISON WILL REMAIN, the seventh book in the Commissaire Adamsberg series, Vargas follows the quirky, intuitive detective as he investigates the deaths of three men killed by spider bites. A hit-and-run in Paris calls the commissaire out of the Icelandic mists of his previous investigation, but it is a stray internet search about recluse spiders that truly catches his attention. Following a whim and a hunch, Adamsberg becomes convinced that these deaths by spider bite are not just unnatural; they’re actually murders. And the closer he looks, the more suspicious they seem. Recluse venom is indeed poisonous, but it would take the venom of twenty-two spiders to kill like this. And what’s more, two of the three victims are linked by their childhood at an orphanage in Nîmes, where they belonged to a group of violent young boys known as “the recluse gang.” Is one of the victims of these childhood bullies seeking revenge at long last, or are there even darker secrets at play?

As more members of the old gang begin succumbing to recluse bites, Adamsberg and his team must race against time to find the perpetrator. The ragtag team of detectives—including an anxious boss who may be hiding something, an unflappable female lieutenant, a narcoleptic, a naturalist, and one of Adamsberg’s dearest childhood friends—crisscross France in an effort to uncover the tragedies of the past and prevent another murder from occurring on their watch.

In Adamsberg, Vargas has created a brilliant and delightfully odd detective to rival Maigret, Poirot, and Merrivale—one who is willing to follow flights of fancy, scraps of memory, and even wordplay down the rabbit hole. Intricate, imaginative, and peppered through with Vargas’ trademark dry humor, THIS POISON WILL REMAIN is full of twists and surprises that will keep readers guessing until the very end. As The Washington Post once put it, “It’s a tangled web [Vargas] weaves, and a hard one to escape.”

Fred Vargas is one of the most prolific and celebrated crime writers in the world—The Guardian calls her “the hottest property in contemporary crime fiction.” A native of France, her books have been published in forty countries and sold more than ten million copies. Her Commissaire Adamsberg series has been celebrated as “insanely imaginative” (The New York Times Book Review), “darkly whimsical” (The Washington Post), and “immensely enjoyable” (Publishers Weekly).

Fred Vargas is a #1 bestselling author in France, Italy, and Germany. She is the winner of four International Dagger Awards from the Crime Writers Association, and is the first author to achieve such an honor. In 2018, Vargas won the Princess of Asturias Prize for letters.

Win a copy of This Poison Will Remain courtesy of the publisher! You MUST be a US resident.
a Rafflecopter giveaway

**Important Details: The giveaway will run until Tuesday, August 13th at midnight. The winner will be selected from verified entries.  Winner will be contacted for their address which will be passed on to the publisher for the prize to be sent out.  Jessica’s Reading Room is not responsible for misdirected copies.

“[Vargas’] mysteries are darkly whimsical—magical realism with its feet on the ground in a highly entertaining French way.” —The Washington Post

“Insanely imaginative procedurals… One reads to be amazed by the fantastic twists… as well to be delighted by the literary grace notes… who can resist a detective who cracks a case by researching the etymology of a killer’s name?” —The New York Times Book Review

“Anyone who enjoys kooky characters and intricate detail will happily follow Vargas along.”
—Entertainment Weekly

“Few crime stories are as apt to leave a reader wondering so ardently: Who dunnit?… Vargas’ characters are like something out of a fairy tale – eternal opposites, ever-renewing archetypes despite their fresh adventures each time. That’s why each novel’s opening feels new.” —The Philadelphia Inquirer

“Crime fiction doesn’t get any quirkier than Fred Vargas’ Commissaire Adamsberg mysteries. With her nods to fantasy, mysticism and medieval fiction, her unusual settings and titles like Seeking Whom He May Devour, the wonderful French writer (real name: Frederique Audoin-Rouzeau) has established a subgenre all her own.”