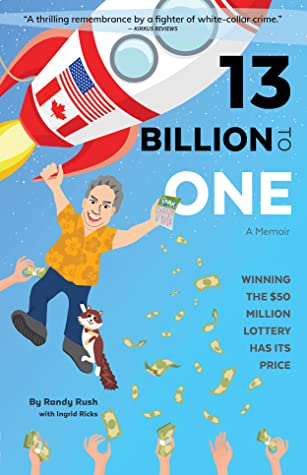 As a welfare kid who grew up in the streets, Randy Rush had to fight for everything he got and knew what it was like to struggle. So, when he was suddenly handed $50 million in tax free money, he vowed to use his new-found wealth to help others. But what he didn’t see coming was Jeremy Crawford.

In his gripping, adrenaline-packed memoir, Rush takes readers on his rocket-fueled journey after a trip to the corner grocer to buy food for his beloved cat, Conway Kitty, leads to the discovery that he has won Canada’s $50 million Lotto Max jackpot.

Soaring on a seemingly endless endorphin high, Rush spends the months following his win traveling, feeding his passion for rare sports cars, considering charitable causes, and splurging on friends — paying off their debts and even giving them a free place to stay in million-dollar homes. But his world comes crashing down when he discovers that Dave Crawford, a man he loved like an older brother and had generously provided for, has served him up to his con artist son, Jeremy — who scams Rush out of nearly $5 million.

Reeling from Dave’s betrayal and fueled by the discovery that the Crawfords are serial con artists who have devastated the lives of more than a hundred others, Rush embarks on a mission to take his adversaries down. But as his quest for justice drags on, his festering rage reaches a boiling point and he is faced with a choice: Let the Crawford’s cons destroy him, or re-focus his attention on doing good in the world and enjoying the enormous gift he has been given.

A bit of a ‘rags to riches’ story that takes a turn, 13 Billion to One is also a cautionary tale. Yes, we all occasionally buy that lottery ticket and fantasize what it would be like to win. But then we never actually win…. But what happens if you actually DO win?  That was why I wanted to pick up this memoir.  Winning the lottery is not all it is cracked up to be.

Some of Rush’s circumstances were of his own fault.  He first wanted to not do any investments for a full year after winning. If he had stayed with his first thoughts, he would not have found himself in his circumstances.  He also came off a bit naïve and over the top with some of his early purchases and helping out of his ‘friends’.  So many people came off to him expecting multiple handouts. I get it, you want to help your friends out, but multiple times?  No, that’s taking advantage of his situation and possibly losing your friendship.

I never lost interest in reading this memoir. It was very easy to read, even when it came to the legal issues, and Rush tells us his story first hand.  Despite wanting to try and help Rush learn to say ‘no’ to people and pay attention to the many red herrings that showed up which he ignored, I had little empathy for him.  I did like how he shows us how he did end up using his money for the good of others in another country.

A very cautionary tale that shows that the love/greed of money is truly evil and how winning the lottery is really not all you might think it may be.

Many thanks to the publisher Rantanna Media for granting me an e-arc to read and review.