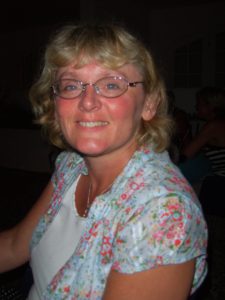 Vivien Brown lives in West London with her husband and two cats. She worked for many years in banking and accountancy, and then, after the birth of twin daughters, made a career switch and started working with young children, originally as a childminder but later in libraries and children’s centres, promoting the joys of reading and sharing books through storytimes and book-based activities and training sessions. She has written many short stories for the women’s magazine market and a range of professional articles and book reviews for the nursery and childcare press, in addition to a ‘how to’ book based on her love of solving cryptic crosswords. Now a full time writer, working from home, Vivien is combining novel-writing and her continuing career in magazine short stories with her latest and most rewarding role as doting grandmother to two-year old Penny.

What sort of mother would leave her all alone… a gripping and heart-wrenching domestic drama that won’t let you go.

Lily, who is almost three years old, wakes up alone at home with only her cuddly toy for company. She is afraid of the dark, can’t use the phone, and has been told never to open the door to strangers.

But why is Lily alone and why isn’t there anyone who can help her? What about the lonely old woman in the flat downstairs who wonders at the cries from the floor above? Or the grandmother who no longer sees Lily since her parents split up?

All the while a young woman lies in a coma in hospital – no one knows her name or who she is, but in her silent dreams, a little girl is crying for her mummy… and for Lily, time is running out.

I am married with grown-up twin daughters and a little granddaughter, and live on the outskirts of London with my husband and two cats. For many years I worked with young children, introducing them to the wonder of books and reading stories to them in libraries, nurseries and parks, often with puppets, props and songs to make the whole experience come alive. At the same time I was writing short stories for women’s magazines, and have now had about 140 published. Away from writing, I enjoy tackling and compiling difficult crosswords, watching and taking part in TV quiz shows, and eating lots of chocolate!

JRR: Sounds like a nice relaxing life that I can only wishfor!  It seems like I have too many things to do and never enough time….

Lily Alone is your first novel. What made you want to write this novel? Where did you get the idea for it? This story could be every parent’s worst nightmare: Their young child alone.

I have written two earlier novels, under a previous author name, both only available as ebooks, but this is my first ‘proper’ publishing contract and my first paperback. Having worked with the under-fives, I am fascinated by their growing independence and skills, yet am only too aware that they are still so vulnerable and helpless in many ways too. I wanted to explore how a two-year-old would manage alone, and what circumstances might have put her there. The novel looks at other forms of loneliness and feelings of abandonment too, whether as a result of divorce, grief, negligence or old age.

When I was very young I read all Enid Blyton’s Mr. Pinkwhistle books for their simple stories and touch of magic. In my teens I adored Leonard Cohen, starting with his song lyrics, moving on to his poetry and then reading his novels. He made me want to use language more imaginatively and play around with words so not only the meaning but the rhythm felt right. He probably made me want to be a songwriter rather than an author and I would still love to have a go at that, even though I am not very musical.

I read lots of different genres of fiction so it’s hard to pick just one. I have loved both of Clare Mackintosh’s psychological thrillers, but equally enjoy a good happy-ending romance from authors like Iona Grey or Veronica Henry. But, for sheer storytelling, I will say Jean Fullerton, whose ‘nurse’ series based in the East End of London in the 1950s have a real sense of place and a feeling of being part of a close community, and instantly drew me in.

As for inspiration, I suppose I would like to write like Jane Corry or Clare Mackintosh   – authors who tell complicated stories, often from more than one point of view, and tease their readers, making them wait – and guess – right to the end. But I want to use those techniques in my own way, to enhance my dramatic family-based themes, not to veer towards the psychological thrillers or murderous plotlines those particular authors write so well.

JRR: Clare Mackintosh is an author I look forward to reading at some point!

If you could have dinner with three people (living or dead) who would they be and why?

Firstly Victoria Wood, whose writing (from stand-up comedy and funny songs to TV situation comedy and drama) can be hilariously funny or tragically poignant, with everything in between. She was a perfectionist, so they say, and a joy to work with, but was also well known for being shy so I know she wouldn’t intimidate or dominate the conversation and I think we would have got along.

Next, actor Kevin Costner, who would sit opposite me so I could just look at him! The most handsome and charismatic man alive, and star of many of my favourite films. But it wouldn’t matter what he talked about because I could just listen to his sexy voice all night long.

And lastly, my own dad Wilf Smith, who I lost almost 25 years ago – just so I could see him again.

JRR:  Great choices!  You last choice of your father would also be one of mine.  My father passed away almost 19 years ago and I had just turned 19. So this year will be tough thinking about that.

I always feel I should have read more Charles Dickens. Great storylines and settings, wonderful characters with the most unusual names, but the old-fashioned language can be off-putting and it is often so much easier to watch a film or TV adaptation.

JRR: That is true. I just listened to the audio version of A Christmas Carol narrated by Tim Curry in December.  I grew up watching the story on tv, so I knew it, but I had difficulty with the ‘old-fashioned language’ in it.

What’s the best advice you have ever received?

When it comes to writing and trying to get published, never give up. Perseverance really is everything, and often it can be more important than talent. If you are willing to listen to advice and criticism, take time to learn the craft, and work hard, you will succeed. I did!

JRR: Yes, you CAN achieve your dream!

Yes! The news that my next novel, to be called Five Unforgivable Things, will be published in the UK in July and in the USA a few months later. It’s another domestic drama, following the course of a long marriage and the five pivotal moments when mistakes were made – mistakes so big that they altered the course of the whole family’s lives.

JRR: That sounds good! I look forward to it.

**Thank you so much for your time with this interview Vivien!