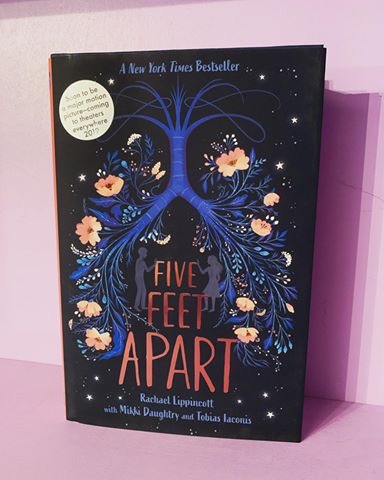 Today Kim and I bring you a double review of Five Feet Apart by Rachael Lippincott, Mikki Daughtry, and Tobias Iaconis.  We both enjoyed it and rated it 5 stars!   Kim read the physical book while I listened to the audiobook and we are both looking forward to seeing the movie.

Can you love someone you can never touch?

Stella Grant likes to be in control—even though her totally out of control lungs have sent her in and out of the hospital most of her life. At this point, what Stella needs to control most is keeping herself away from anyone or anything that might pass along an infection and jeopardize the possibility of a lung transplant. Six feet apart. No exceptions.

The only thing Will Newman wants to be in control of is getting out of this hospital. He couldn’t care less about his treatments, or a fancy new clinical drug trial. Soon, he’ll turn eighteen and then he’ll be able to unplug all these machines and actually go see the world, not just its hospitals.

Will’s exactly what Stella needs to stay away from. If he so much as breathes on Stella she could lose her spot on the transplant list. Either one of them could die. The only way to stay alive is to stay apart. But suddenly six feet doesn’t feel like safety. It feels like punishment.

What if they could steal back just a little bit of the space their broken lungs have stolen from them? Would five feet apart really be so dangerous if it stops their hearts from breaking too?

If Everything, Everything and The Fault in Our Stars got together and had a baby then it would result in Five Feet Apart.  I loved this novel, and the cover is beyond gorgeous:  Before I knew what it was about, I thought to myself “Those look like lungs on the cover” and they are!

Stella and Will both have cystic fibrosis. Stella has been going to the same hospital for years to fight the disease.  Will has traveled all over the world for various treatments, but has only seen the inside of hospitals which are all the same.  Stella and Will meet and Stella can’t stand Will…. Then things start to change…

This is a story of first love and the teens in this novel are definitely more grown up than your typical YA characters.  But come on: they know for a fact that their pending death could come at any moment and that would age any teenager. But they are still teenagers.

I don’t know how life-like the novel is with the reality of cystic fibrosis, but this novel feels very real.  I was attached to the characters and you wanted a happy ending and no dumb choices made.  Though we came very close to the dumb choices part. I was thinking “NO!” when a certain situation happened, but at that age and in that situation, who knows what my decision might have been.

Five Feet Apart is also similar to The Sun is Also a Star in the fact that it has a realistic ending. If you are a fan of YA in general or of the other YA novels I mentioned then Five Feet Apart WILL be for you!  I look forward to seeing the movie version soon. I still also need to watch the film versions of these novels as well.

What a great book! Finally, a YA book where the teen drama fit in perfectly and wasn’t ridiculously obnoxious! I loved everything about this book. Look at the cover!!! The story was sweet and easy to read. The characters were cute and realistic. They had enough problems in their lives that they didn’t have to create any.

I didn’t know anything about cystic fibrosis before reading this book. I still don’t know much, but I enjoyed learning a little about it. If I have any criticism, it’s very tiny: there were some medical things that needed a bit more explanation to make it all make sense. I had to keep asking Ivan questions and he finally told me that he didn’t want to talk about B. Cepacia anymore!

I became so emotionally invested in these kids. It was an easy book to get through and I finished it in a day. There were some adult things, like some swearing, that would keep me from recommending it to younger readers, but I’d recommend it to pretty much everyone else! The movie comes out soon and I’m cautiously optimistic about it. I had Cole Sprouse’s face in my head the whole time I was reading and it definitely worked! 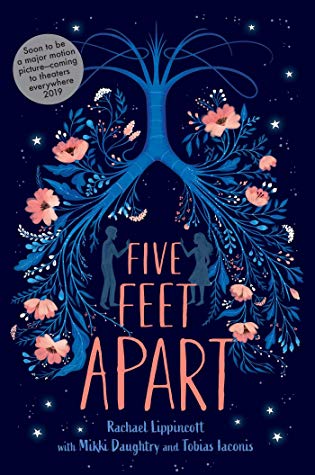