I know everyone (myself included!) will be watching that “Ted Bundy movie” which starts Zac Efron on Netflix this weekend, as it came out today.  I wanted to bring some attention to this true life memoir about multiple serial killers and the young man who wrote them. Kim and I will both be reviewing The Last Victim and I will be giving a movie comparison. 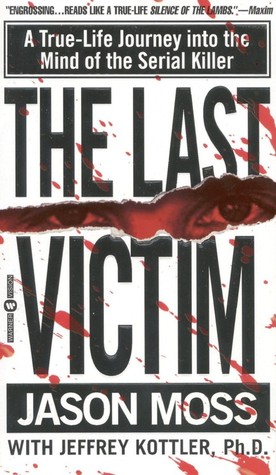 The Last Victim: A True Life Journey into the Mind of the Serial Killer
Author: Jason Moss
Published: February 1, 2000
Audiobook

It started with a college course assignment, then escalated into a dangerous obsession. Eighteen-year-old honor student Jason Moss wrote to men whose body counts had made criminal history: men named Dahmer, Manson, Ramirez, and Gacy.

Posing as their ideal victim, Jason seduced them with his words. One by one they wrote him back, showering him with their madness and violent fantasies. Then the game spun out of control. John Wayne Gacy revealed all to Jason — and invited his pen pal to visit him in prison…

Dear Mr. Gacy…
It was an offer Jason couldn’t turn down. Even if it made him…

The book that has riveted the attention of the national media, this may be the most revealing look at serial killers ever recorded and the most illuminating study of the dark places of the human mind ever attempted.

When you decide to begin a ‘hobby’ there are not many people who would do what  Jason Moss did: write to prison inmates. And not just prison inmates, but infamous serial killers!  Even more shocking is that Jason did this at 18 years old and his parents knew about it.

The Last Victim is Moss’ first-hand account of his writing to infamous killers and ‘getting in their head’ by posing as what would be their ‘ideal’ victim. Moss writes it as if he is talking to you. The Last Victim was released while I was in college and I read it twice.  I was a psychology major and took as many criminal justice type classes as I could. I was going through my reading only true crime books phase, so this book was perfect for me at that time of my life.  Also, Moss was just a few years older than me!

Now, Kim and I both chose to listen to the audible version she bought and bring you a double review.  I did not have much memory of this memoir as it has been at least 15 years since I read it.  The Last Victim is candid, shocking, and extremely disturbing.   I don’t know if there is a difference between reading the book and having it narrated to you, but I found myself turning the volume down as I was driving when the book got to the graphic contents. I guess I did not want people to possibly hear what I was listening to!  I don’t know what Gacy sounded like, but the narrator’s portrayal of him is just frightening!

Moss writes not just one, but multiple killers in the same time frame.  He wrote John Wayne Gacy, Charles Manson, Richard Ramirez, and Jeffrey Dahmer among others.  Moss shares his letters with candor and this book is not for the faint hearted.  Gacy was extremely and heavily sexually graphic in his letters.  Gacy’s writings are really things you do not want to know. Moss’ communications with Dahmer were short lived as he was murdered in prison. Dahmer was also sexually graphic in his writings.  Moss was upset at Dahmer’s death as he felt he did not get to cover more with Dahmer.

It’s hard to comprehend someone writing to these killers, especially someone at Moss’ young age AND his parents also knowing!  Granted, Moss kept the extent of the communication between him and the killers a secret.  Even harder to believe is that Moss used his younger brother in his communications with Gacy. Writing these killers is disturbing enough, but Moss even talked on the phone and visited Gacy several times shortly before his execution. Moss naively thought he could ‘handle Gacy’ due to Gacy’s age and physicality, forgetting the fact that he killed more than 30 boys that were Moss’ age. The fact the people actually write these killers and look up to them is incomprehensible.

This experience obviously affected Moss as I saw an interview with him saying that if he could go back in time then he would not have written the first letter. Also, Moss also committed suicide on 6/6/06 and there is much speculation about the date of his suicide. The research he did to communicate with Ramirez must have stayed with him, as Ramirez was a Satanist.

This is a dark and disturbing true life account that has a sad ending. Even the title has a double meaning as Moss truly was Gacy’s last victim.  This memoir will not be for everyone and I urge very high reader discretion before picking up The Last Victim.

Oh. My. Gosh. Ok so y’all know I’m a weirdo who loves horror and with books and movies, the scarier the better. I can watch episode after episode of Criminal Minds without blinking twice. I listened to Helter Skelter, all the in-depth info on the Manson murders and his trial, and loved every second. I have a creepy ass doll collection that weirds everybody out except the other horror freaks who geek out in their pants over them. But Jason Moss threw me for a loop!

I haughtily went into this audiobook all excited about the things I would learn and all the insides of the brains of serial killers and how fascinating it all would be. It scared the living crap out of me and not in the fun kinda way!! I had to stop listening so many times because I was freaked out. John Wayne Gacy is easily the most terrifying person I have ever read about. And I’ve read about some sick people, I’m a historian, it’s what I do. It was so bad that when Jason decided to write to Charlie Manson and he received letter after letter of Charlie’s crazy rambling, I found it comforting and familiar. I was back in territory I understood, however limited my understanding. Even Dahmer and Ramirez didn’t affect me the way Gacy did.

And you have to understand, when the book started and Jason started talking about his idea to write to killers, my reaction was “what a great idea! Why didn’t I think of that? I wonder if there are any serial killers still alive? Can I try something like that?” My inner nerd jumped up and down in excitement and I couldn’t wait to see where this went. And here’s where I’ll explain my rating. I gave it 3 stars because I was a little disappointed with the scattered way Jason went about his project. After reading Helter Skelter, which was laid out in minute detail, guided by logic and rationality, all the legalities presented to the letter, I was looking for something a little more professional from Jason. I’m holding him to this higher standard because it’s very clear that he was a genius kid who had a very clear idea of what he wanted to accomplish with his project. His execution was immature and unscholarly, however fascinating and edgy. I was also just plain traumatized. Getting into the minds of sick, twisted men like Gacy is not a pleasant experience and frankly, I hope I never have to do it again.

I keep going back to Helter Skelter because it is the perfect true crime book to me. And if I’m going to analyze why I like one over the other, then I’ll say that I think it was the legal system vs. criminal psychology. I think that in another parallel universe, I’m a badass criminal prosecutor who knows every little facet of the law and can break a witness down with no effort. Helter Skelter focused on what it took to convict Manson and the family members and the problems and difficulties from crime to conviction. It was relatively clean, logical, and detached. The Last Victim was none of those things! It was messy, dirty, and alarmingly personal. What made it even worse was that I learned that Jason Moss committed suicide less than 15 years after his correspondence with the killers. He was only 18 when he embarked on his project and he saw and experienced things that even an 31 year old horror freak and cynic like me would have broken down from. He was just a kid and that’s the center of this tragedy. It was easy to forget Jason’s age, as I said, he was a genius and incredibly mature. Saying that he was Gacy’s last victim is so sadly true and I hate to even admit it because I don’t want to give Gacy the satisfaction. Thank goodness he was executed long before Jason killed himself.

This is not a book that I would recommend to just anyone. It’ll take a strong stomach and a steely mind to get through The Last Victim. I’m glad I read it and I absolutely appreciate the things I learned, but I don’t think I’ll be reading it again.

Jason Moss was featured on 20/20. These are from You Tube: 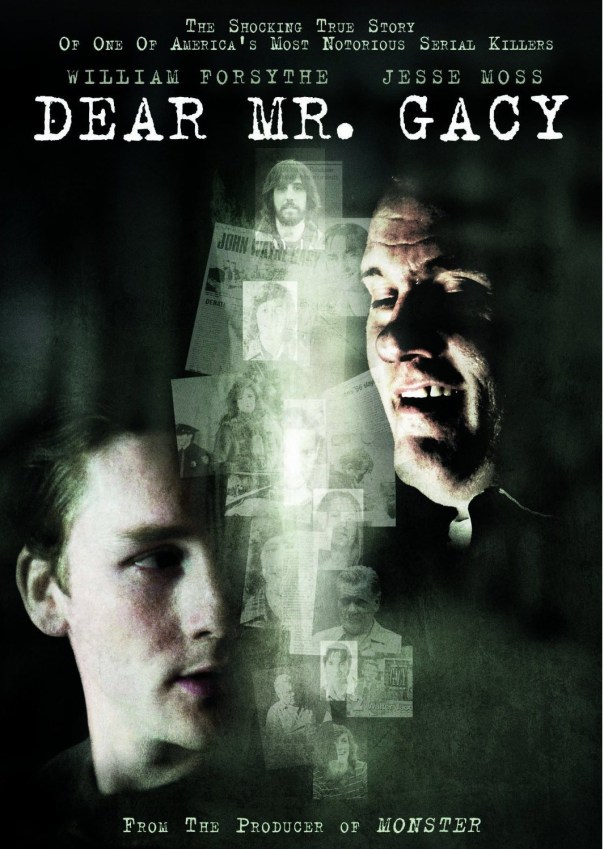 As disturbing as The Last Victim was I decided I was going to watch Dear Mr. Gacy which is the film that is based on Jason’s ‘relationship’ with John Wayne Gacy. What freaked me out was that the actor that portrayed Jason looks a lot like him and even has a similar name: Jesse Moss. He is no relation to Jason. William Forsythe portrayed Gacy perfectly. He is just as terrifying as I am sure Gacy was in real life.

The film ignores the other relationships Jason had with the other serial killers. One serial killer was enough for our film! I did notice that there was a reference to Ramirez on screen: On Jason’s wall there is a drawing Ramirez drew for Jason. This was most likely for those who read the memoir.

The film does show Jason’s naiveté and descent into paranoia with his communications with Gacy. He really was in this way too deep, especially someone who was just 18.We also see how depraved Gacy was. (Like we did not know this after reading the memoir!)

The movie is fairly close to the memoir, though some changes were made. Again, this is a film and for ‘entertainment’. In reality Jason gave Gacy his private phone number in a letter; in the film Gacy was able to get Jason’s number by his own means and call Jason at 5am! The film shows Jason nearly killing a prostitute, and yes Jason did talk with prostitutes so he would know how to talk to Gacy about certain things, he did not almost kill one. The film also shows Jason speaking to a survivor of Gacy, the memoir does not speak of anyone who survived Gacy. The film shows the ‘warden’ talking to Jason where in the memoir Jason’s mother spoke to the ‘warden’. In the film Jason also visits Gacy right before his execution, when in reality the visit was about two months beforehand. The film also cuts Jason’s visit to one time where Jason actually returned to the prison.

Much of the terror you feel while watching Dear Mr. Gacy is in knowing that is a true story and an 18-year-old kid actually lived this: This is not made up Hollywood. The movie is disturbing and watching it once was enough for me. The film really shows how much Jason was affected by Gacy. In reality he was affected so much by these killers that it must have always stayed with him as he committed suicide on 06/06/2006 which is a sad ending to a disturbing true life story.