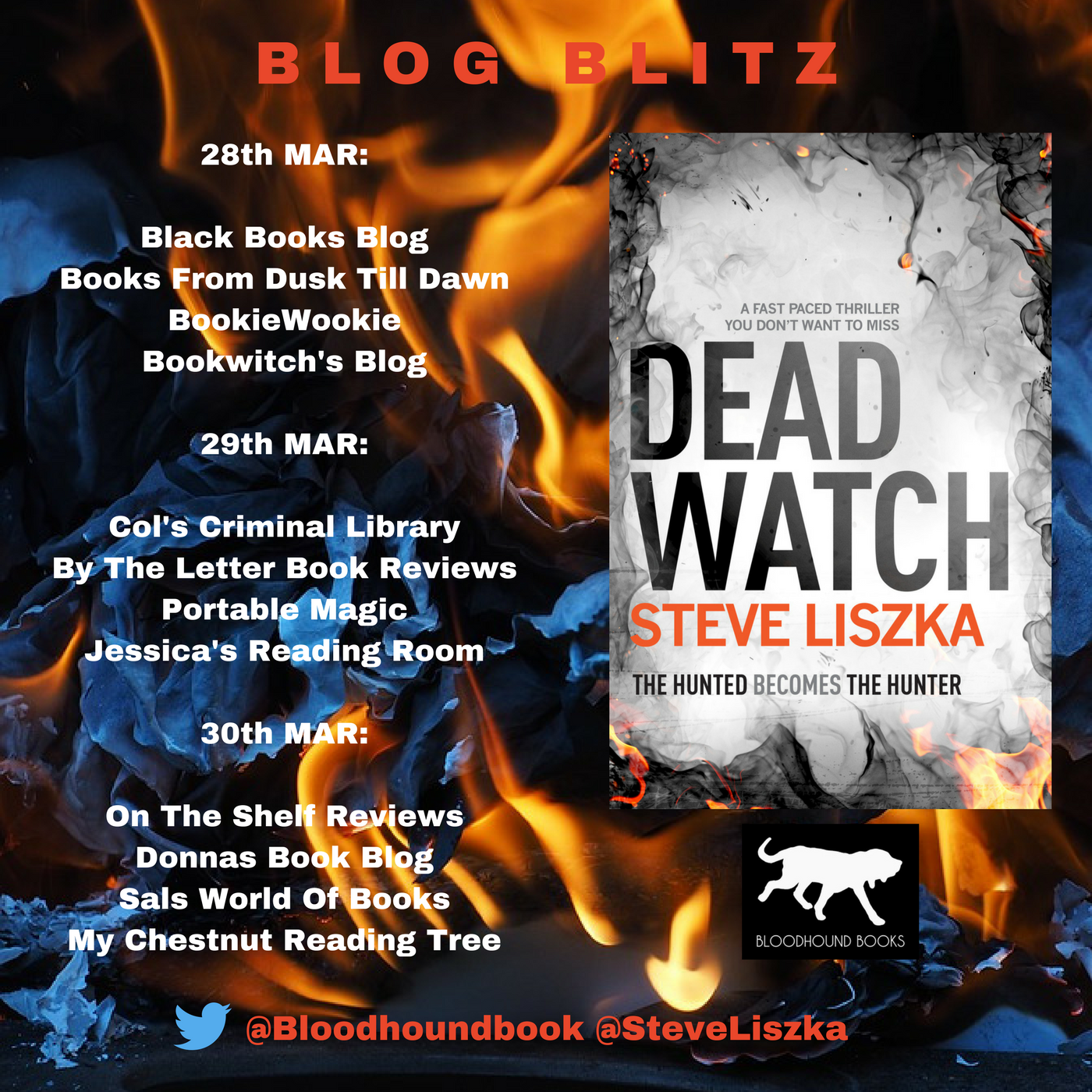 Today I am on the Blog Blitz for Dead Watch by Steve Liszka. The publication date was yesterday, March 28th. Dead Watch is published by Bloodhound Books. Today Steve is sharing why he wrote Dead Watch!

Life for the firefighters of Red Watch, East Brighton, is already complicated due to the imminent closure of their fire station. But this is soon to be the least of their worries.

When the team stumble upon a car in a ditch, they discover the driver is dead and a bag containing five hundred thousand pounds in cash. Before anyone arrives, the crew decide to take money, believing it to be a victimless crime.

When they later learn that the driver was killed by a bullet wound to the head their world is turned upside down.

Then a stranger appears at the station claiming the money belongs to him.

Soon the firefighters are drawn into a dangerous underworld and find themselves at the mercy of violent criminals.

But is this stranger who he claims to be?

And can Red Watch escape with the money and their lives in tact? 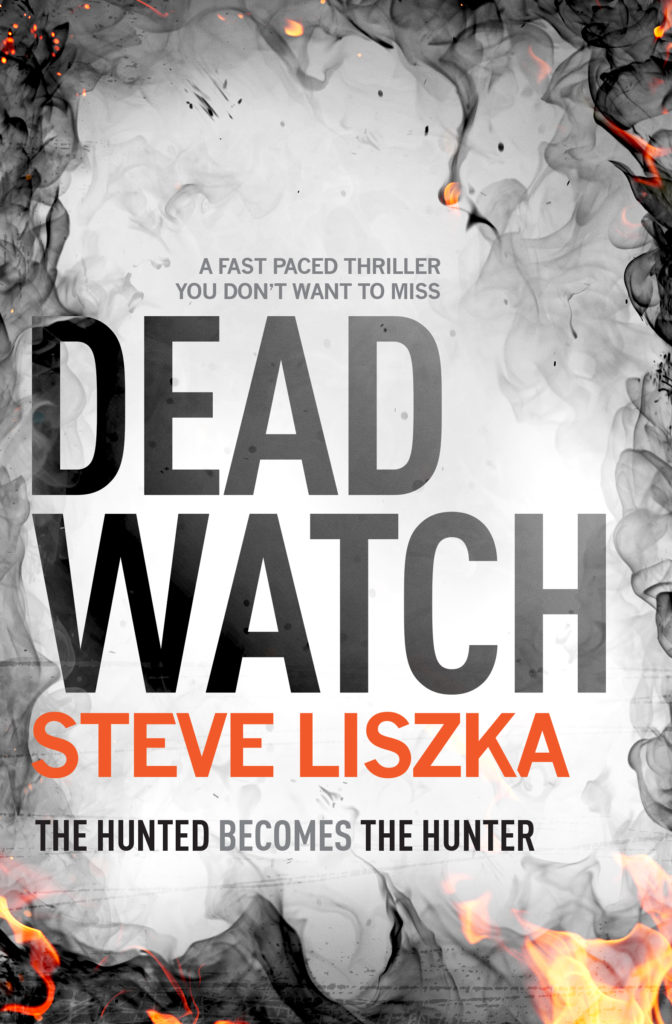 Why I wrote Dead Watch

Looking back on it now, it seems obvious that I should have written a book about my job as a firefighter, but back when I started writing, I couldn’t see it. My first novel This Machine Kills was released in 2012, but I probably started writing it 5 years before that. It was a violent dystopian tale where the country was run by a businessman who wanted to build walls around his cities to keep the people protected from the poor, massed at its edges. It seemed quite far-fetched at the time but since Donald Trump has come into power I’m not too sure anymore. After not being able to secure an agent or publisher, I eventually self-published the book. It received some very positive reviews and sold a few hundred copies, but soon disappeared into the internet ether.

When I decided I wanted to write something else, it struck me that there were very few books written about the fire service. Thousands of books are published each year regarding the police, but I have never read anything about my own profession, a job I have done for seventeen years. I therefore decided that this time I would ‘write what I know’, and with that, had to work out how to go about it.

I quickly realised that it was going to be trickier than I thought. For one thing, I knew I couldn’t write a procedural type book, as is often the case with police-based thrillers. The jobs we go to in the fire service, tend to be dealt with within a few hours, unlike the weeks, months or even years it takes in the case of police investigations. Even particularly large incidents are usually done and dusted within a day or two, therefore I couldn’t really write a story about an incident I was likely to attend as it would only be a few chapters long at most! I also knew I didn’t want to write a memoir type book. I’ll leave that to more experienced firefighters when they write their autobiographies.

Writing about an arsonist would probably seem the obvious choice, but in reality, most of these are not master criminals, striking terror into the heart of the city with their actions. The arsonists I have mostly come across tend to be people with mental health issues and often those actions are a cry for help. Their targets are not normally buildings either but tend to be rubbish bins or something equally unexciting. Very often these people hang around at the incident and in some cases try and help us put the fire out. When you spot them at the next fire, it doesn’t take a genius to work out who did it, and I think often, these people are looking to get caught. Like I say, it is a cry for help. For this reason, I didn’t want to sensationalise the roles of arsonists in society.

Ruling out these options I fell back on the chats that we have around the canteen table. A question that has popped up before (not just on my watch, but probably every canteen in the country), is, if you found a large amount of money at an incident and were sure you would get away with it, would you take the money? I thought this was interesting route to go down that would demonstrate that we are all only human and liable to lapses in judgment. I also wanted to show that even though they had done something wrong, the watch involved would do whatever it takes to make amends, even if it meant risking their own lives.

Something else I wanted to write about was the role of the modern-day firefighter and how fires are only one of many incidents that we are likely to attend. Many people are not aware of what we really do, and so I thought this was a perfect opportunity to explain! I also wanted to try and convey what it is really like to go into a building on fire. On TV and in the movies, the picture that is painted of a brave firefighter running into a building to tackle the fire is about as far removed from reality as you are likely to get. I have spoken about it in more detail in the book, but most of the time when we into fires, we operate in zero visibility conditions. It is the reason why, when we do our training, we cover up our masks as we know that when it’s for real, we’re not going to be able to see a thing.

I also thought it was important to write about the camaraderie that exist on a watch and how, due to the things we experience together as a team, there is a deep bond that exists between watches that would be difficult to find in many other places. Similarly, and again this is something I discuss in the book, the infamous black humour in the service is a coping mechanism used to deal with some of the incredibly traumatic things we witness.

In the book I have also discussed the affects of austerity on the fire service nationally. All the services in this country have had their budgets cut massively in the past few years and as a result, jobs have been lost, fire appliances have been removed and, in many cases, stations have been closed. This has already had a devastating effect, with fire deaths in the country rising, despite claims to the contrary by the government. Even though it has been argued by those making the decisions, what it comes down to is this; the longer it takes us to get to you (with the proper resources) the more likely you are to die at a fire. Anyone who says any different is a liar.

For reasons like this, there is an unapologetically political edge to my book. I served as a rep for the Fire Services Union (FBU) for five years. In that time, and ever since, we have been involved in a fight to protect not only our stations and staff members, but also our conditions of service and even our pensions. There is also a looming threat of privatisation to the service, and again this is something I have discussed in the book (I and all my colleagues are viciously opposed to it).

Saying all that, I love my job and the people I work with. It is hard to imagine doing anything else as varied, and with so many unique challenges. I just hope that in the book I have done the job, and the firefighters of this country justice. 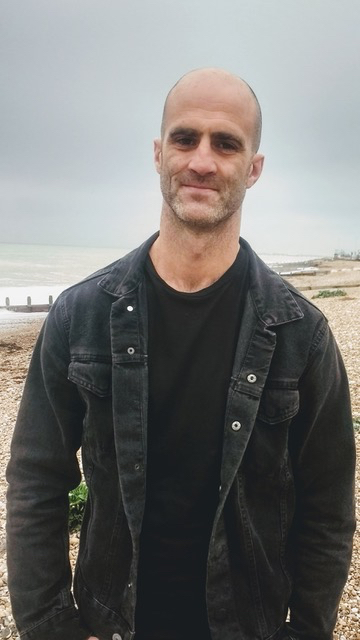 Steve has been an operational firefighter for the past seventeen years and it was his job that led to him writing his latest novel Dead Watch. He is based at Preston Circus Fire Station in Brighton, one of the busiest in the South East. Originally from Swansea, Steve now lives in Worthing with his wife Angela and children, Buddy and Sylvie.

Steve has always been an active sports person, competing in rugby, amateur boxing, rock climbing and many other pursuits. For the past ten years, he has run his own old-school outdoor fitness classes using kettlebells, tyres, sledgehammers and various other instruments of torture.

Steve’s first novel This Machine Kills was released in 2012. It is a violent dystopian tale where the country is run by a businessman who wants to build walls around his cities to protect the residents from the poor people outside. As if that would ever happen…

I personally have a high respect for fire fighters. Back in 2004 I took a class called the Citizen’s Fire Academy where you get to learn about the fire department. We even put on their turnout gear and went on ‘ridealongs’ on the fire truck! 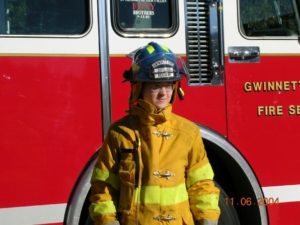 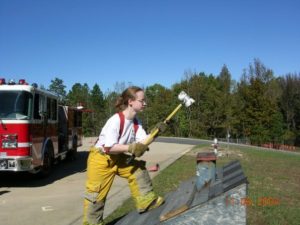 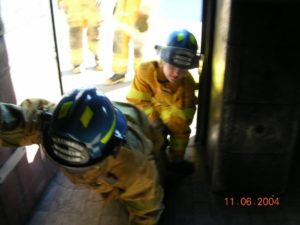