Today I am part of the blog tour for Chickens Eat Pasta: Escape to Umbria by Clare Pedrick. I am sharing an extract of the novel. **There is also an international giveaway going on!**

Not just another romance, but a story of escapism, coincidences, friendship, luck and most of all… love.

Chickens Eat Pasta is the tale of how a young Englishwoman starts a new life after watching a video showing a chicken eating spaghetti in a mediaeval hill village in central Italy.

“Here I was, 26 years old, alone and numb with boredom at the prospect of a future which until recently had seemed to be just what I wanted.”

Unlike some recent bestsellers, this is not simply an account of a foreigner’s move to Italy, but a love story written from the unusual perspective of both within and outside of the story. As events unfold, the strong storyline carries with it a rich portrayal of Italian life from the inside, with a supporting cast of memorable characters. Along the way, the book explores and captures the warmth and colour of Italy, as well as some of the cultural differences – between England and Italy, but also between regional Italian lifestyles and behaviour. It is a story with a happy ending. The author and her husband are still married, with three children, who love the old house on the hill (now much restored) almost as much as she does.

Chickens Eat Pasta is Clare’s autobiography, and ultimately a love story – with the house itself and with the man that Clare met there and went on to marry. If you yearn for a happy ending, you won’t be disappointed. It’s a story that proves anything is possible if you only try. 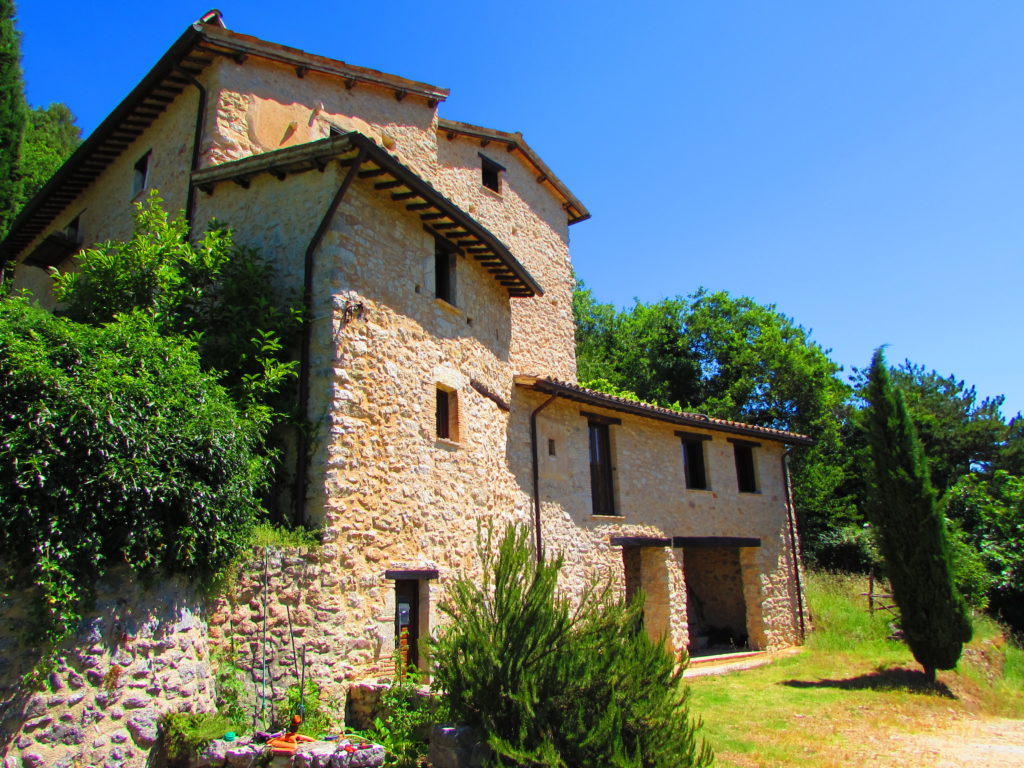 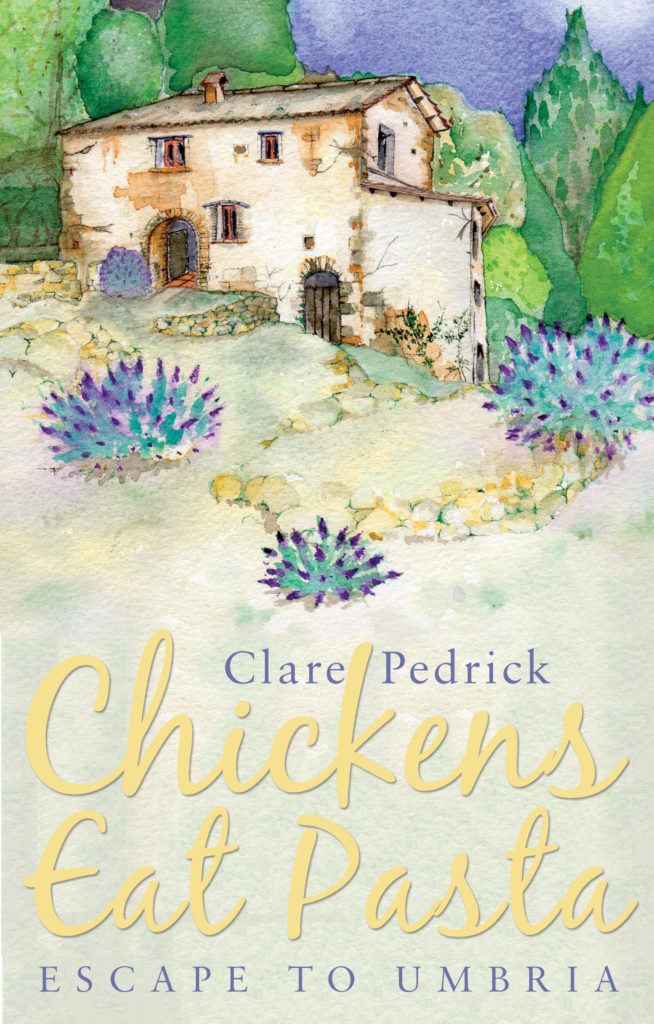 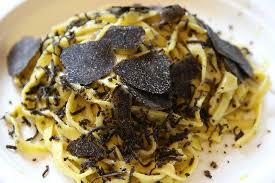 “Does the Signorina have a family?” The question was not directed at me, even though I was the subject of the inquiry and was sitting at a table laden with food amongst the family who had invited me to lunch. It was becoming increasingly obvious that I was something of a novelty, and invitations like today’s were not uncommon. Grazia, the hostess, looked past me towards Angela and Ercolino. They had clearly taken on the status of my parents, at least for this particular occasion, given that it appeared I did not have any of my own.

I saw Natalino, the son, shift uncomfortably in his chair as his mother leaned over his shoulder and ladled out a large helping of strangozzi with wild asparagus. She passed to my place, which had been set strategically next to Natalino’s, still refusing to catch my eye.

“Does the Signorina like home-made pasta?” she asked Ercolino. “I made it myself with our own olive oil. The asparagus come from the hills around the village.”

I assured her that I did, but she seemed not to hear me. My stand-in parents confirmed what I had said and Grazia spooned

some pasta into my plate before moving on to serve the rest of the large gathering seated around the old wooden table. I waited for her to sit down, but everyone else plunged their forks into their pasta and started eating noisily. Grazia, a thin, severe looking woman with the regulation overall fitted tightly over a high-necked dark brown dress, made no move to take her place, but turned towards the waist-high fireplace, which was lit in spite of the warm temperature outside. She piled some hot ash over a dish of pizza stuffed with spinach and covered with silver foil. While she waited for it to finish cooking, she used her fingers to turn some lamb chops on the griddle placed over the embers.

“These are from our own lambs,” she said, still speaking to Angela and Ercolino, though the information seemed to be aimed at me. “We’ve got sheep, five cows, chickens, olives, vines. And of course, a truffle hunting dog.”

“You won’t go hungry here,” interjected Natale, the grandfather, smiling toothlessly as he attempted to chew some meat from the lamb chop that his daughter-in-law had just put on his plate. Natalino put down his food and darted a meaningful glance in the direction of the old man.

“And does the Signorina have a boyfriend?” inquired Grazia, as though the idea had only just come to her. “Why not take Natalino?” asked the grandfather loudly nudging me vigorously. The table went quiet as Natalino visibly

shrank in his chair. “I’m so sorry about all this,” he muttered under his breath.

Poor Natalino had not had the best of days and I couldn’t help feeling sorry for him. Earlier he had borrowed his father’s car to take me to a tiny lake suspended in the mountains, which was reached by a seemingly endless series of unpaved roads that wound up through the soft green hills. The sun was warm and when we reached the narrow stretch of grass next to the lake, I stripped down to my swimming costume under my shorts and tee-shirt.

“Aren’t you coming in?” I asked, heading for the water. He looked down uncertainly at his short pale legs, having reluctantly removed his trousers.

“I am as white as a mozzarella,” he said. “I’ll stay here and get some sun and watch you swim instead.” There was no persuading Natalino to come into the water, for, as he confessed shyly when I emerged ten minutes later, he had never learned how to swim. He had another confession to make, which was even more difficult, though not entirely unexpected. He was definitely not my type, so I tried to explain that I was not looking for any kind of relationship, other than friendship of course. It was becoming increasingly clear that life in San Massano was going to be more complicated than I had thought. 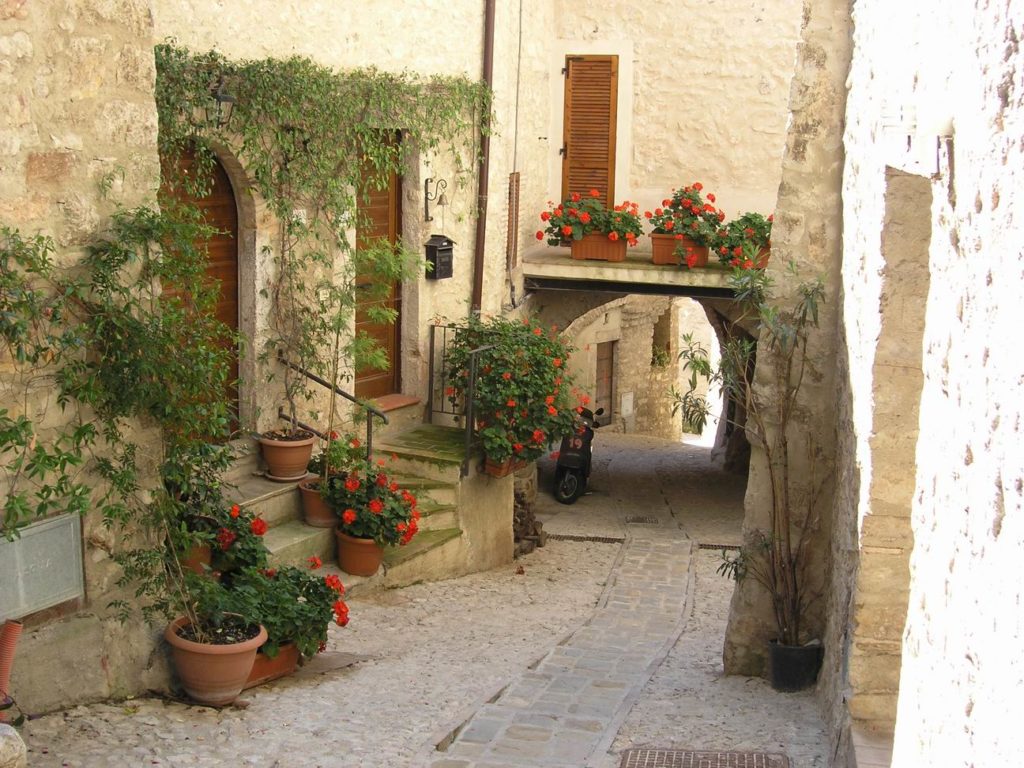 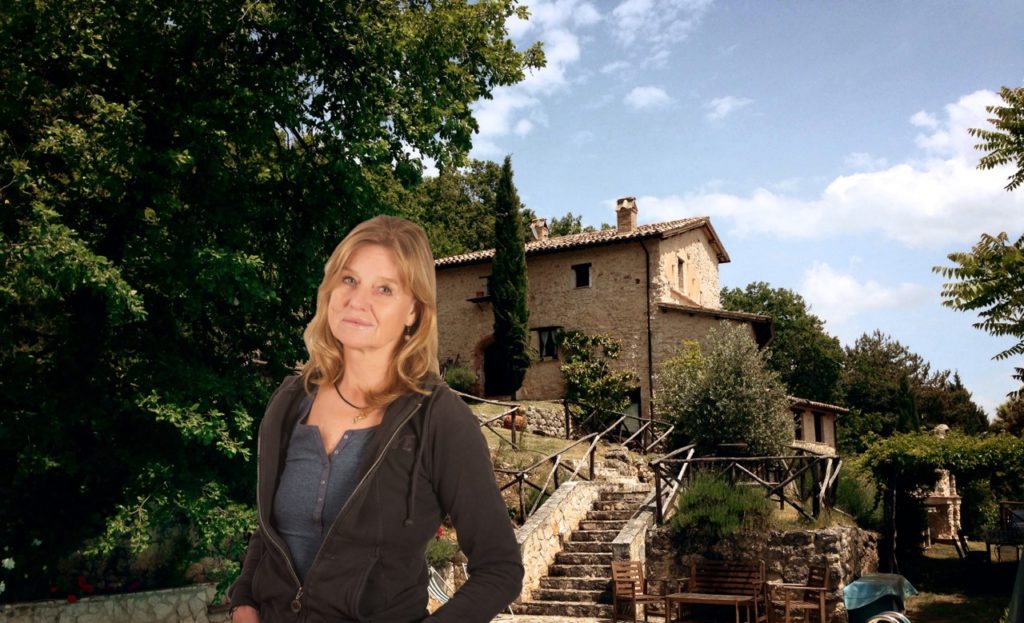 Clare Pedrick is a British journalist who studied Italian at Cambridge University before becoming a reporter. She went on to work as the Rome correspondent for the Washington Post and as European Editor of an international features agency. She still lives in Italy with her husband, whom she met in the village where she bought her house.

Read her blog about life in Umbria here.

Win an audiobook copy of Chickens Eat Pasta!
**Winner gets to pick between audible and ibooks audio code** 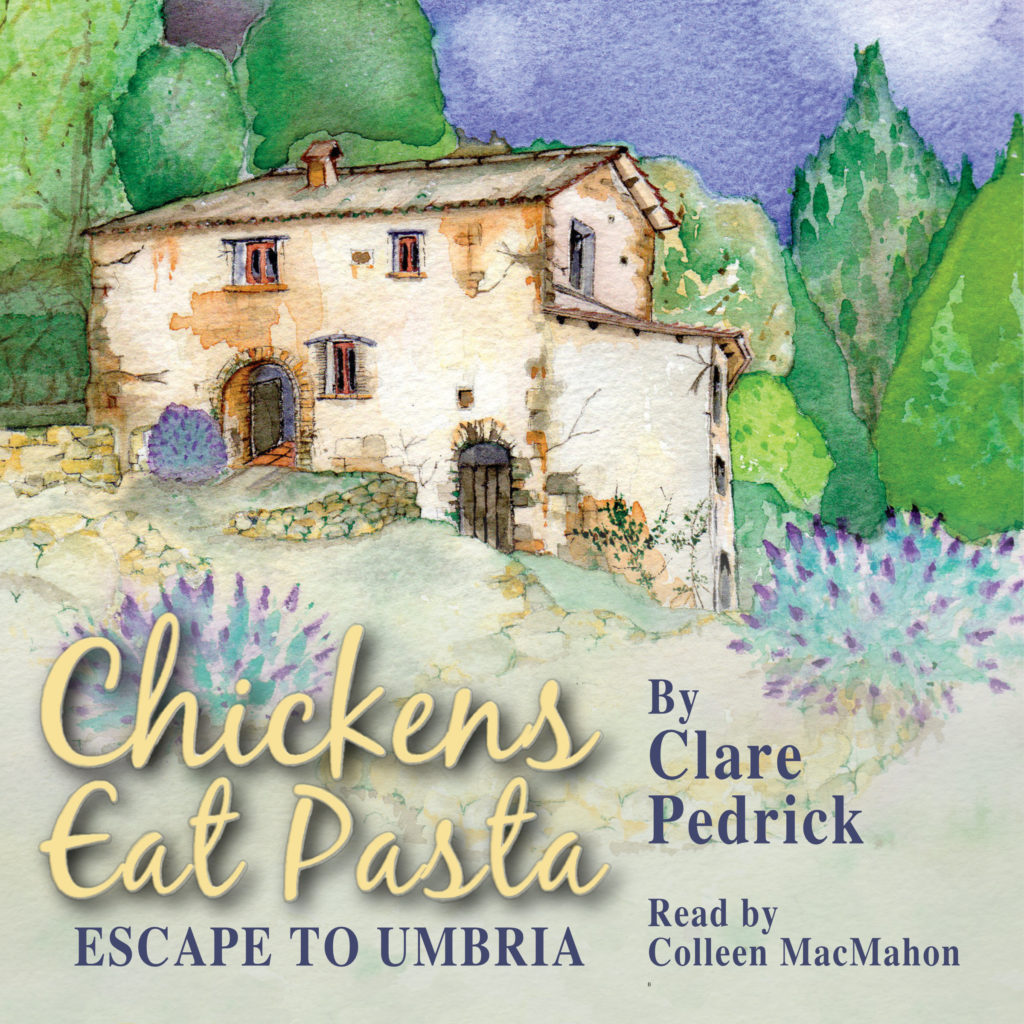 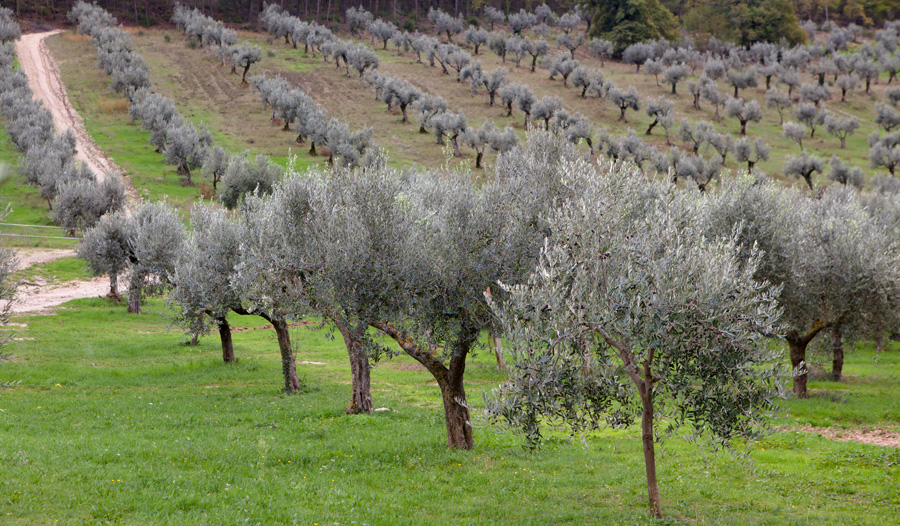