Today I am one of the stops on the blog tour for Cuttin’ Heads by D.A. Watson! I interviewed him and there is also a giveaway for a signed copy!

Aldo Evans is a desperate man. Fired from his job and deeply in debt, he struggles to balance a broken family life with his passion for music.

Luce Figura is a troubled woman. A rhythmic perfectionist, she is haunted by childhood trauma and scorned by her religiously devout mother.

Ross McArthur is a wiseass. Orphaned as an infant and raised by the state, his interests include game shows, home-grown weed, occasional violence and the bass guitar.

When the sharp-suited, smooth talking producer Gappa Bale offers them a once in a lifetime chance to make their dreams come true, they are caught up in a maelstrom of fame, obsession, music and murder.

Soon, Aldo, Luce and Ross must ask themselves: is it really better to burn out than to fade away? 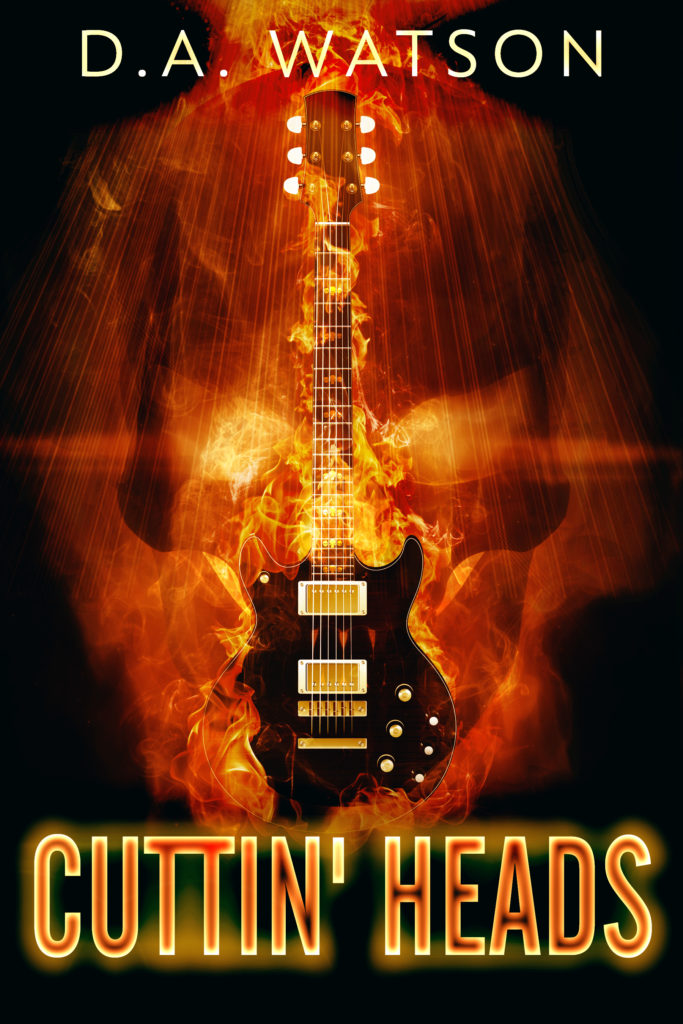 Howdy. My name’s Dave, I’m 41, I live in the Inverclyde area in West Central Scotland, and I’ve been doing this writing thing seriously for around six years. When not scribbling, I’m probably reading, attempting maverick DIY and gardening projects, playing Minecraft with my seven year old son or teaching the guitar.

JRR: Did you always want to become an author?

Nope. I toyed with the idea for about ten years while writing the first draft of my first novel, In the Devil’s Name, but it was more a fantasy than an actual ambition. Starting that first novel in 2002 was more like a part time experiment to see if I could write a book, and I would dip into it every now and again, just doing a little bit at a time, sometimes going months or even years between writing sessions. It wasn’t until I posted a few chapters online and people reacted well to it that I started to think I might actually have written something other folks would want to read. That was when I gave what I had, which was only about half of a first draft, to Louise Welsh, who was then the Writer in Residence at the University of Glasgow where I was doing a music and digital media degree with the plan of becoming a teacher. When Louise told me she thought I had something there, and encouraged me to finish the novel, that’s when I really started getting serious, so much so I self-published the first edition of In the Devil’s Name, and surprised and delighted by the good reviews it received, wrote my second novel The Wolves of Langabhat. When I managed to land a literary agent and publisher on the back of that book, weighed against my rather mediocre marks at uni, it became clear what I was better at. So I abandoned the plans to go into education and did my masters degree in Creative Writing instead.

JRR:  And look where you are now!  Who was the most influential author you read when you were growing up? Did his/her writings influence you to want to become an author?

Well I remember reading Killer Crabs by Guy N Smith when I was about thirteen and thinking it was a work of unparalleled literary genius. That, and The Howling III by Gary Brandner were the first books that got me into horror. For my sixteenth birthday, I got a Dean Koontz omnibus which included Lightning, The Bad Place and Midnight. After that, obsessed, I spent the next few years going through the Koontz back catalogue, and also got really into writers like Richard Laymon, Stephen King, Stephen Laws, James Herbert, Mark Morris, Graham Masterton and Joe Donnelly, who I was delighted to find lived on the other side of the river Clyde from me, and based his novels in the area. When I was in my twenties, I found an old copy of Guy N Smith’s Cannibals in a charity shop, and while it was entertaining enough, set in Scotland and gloriously disgusting, compared to some of the other authors I’d discovered since my thirteen year old self thought Killer Crabs was the best book ever published, I thought the writing wasn’t that great, and was arrogant enough to think I could do better, so Cannibals is the book that first gave the idea to try it myself. Stephen King’s On Writing was also a huge kick in the arse in terms of motivation to pick up a pen.

If I had to pick one favourite, it has to be the totally unoriginal choice of Stephen King. Seriously, give me the new King book, a good milkshake and a well made cheeseburger and I literally couldn’t be more content. In terms of inspiration, a couple of my go-to guys at the moment are Adam Nevill, Joe R Lansdale, Robert McCammon, Glen Duncan and Justin Cronin. Guys that can pen stories that consume you, that play with your emotions, and can make you pause every once in a while, just to savour how good and tight the prose is. Those are the kinds of writers I aspire to.

JRR: I enjoy King as well!  I plan on listening to his newest on audio soon.  What inspires you to write?

Most of the things I write are based on real life experiences, but with a “what if” scenario thrown in. This goes for things I’ve experienced personally, and from existing folklore, myths and legends which is where I get a lot of my ideas.

JRR:  What does your writing process consist of?  (Do you research or just ‘go with the flow’, Handwrite vs typing, music or no music?)

Once I have a basic idea, I’ll do a bit of background research into the subject matter if I need to, just to get a feel for it, then I’ll just dive in and see where the idea goes. I’ll do more research as the story demands it. If I’m stuck, I’ll go back and do some editing, and I do find turning to my notebook and sketching out handwritten ideas helps to give my brain a jump start. I know a lot of writers like to have loud music on to block out everything else, but I’ve tried this method and for me it becomes a distraction. Maybe that’s because other than writing, music is my other big love, and I tend to analyse it, sing along and play air instruments when I’ve got tunes on.

JRR: What made you choose Horror to write? Do you have a favorite Horror novel/author/movie?

I’ve just always been drawn to that side of storytelling, probably because I was exposed to so much of it as a kid. I grew up in the eighties with a grandfather who loved telling ghost stories, and two older brothers who were really into horror movies, so I saw and heard all sorts of messed up things at a very early age. A couple of memorable films that I saw by the time I was seven would be The Exorcist, Nightmare on Elm Street, Hellraiser, The Howling, and the one that’s still my favourite movie of all time, An American Werewolf in London. Yeah, I was traumatised, had nightmares, etc etc, but it all worked out okay in the end…

JRR:  I also grew up in the 80s. I have never seen the Nightmare movies.(I know: shocker!) My husband is planning on getting me to watch it soon. I never saw The Exorcist until college

Where did you get the idea for Cuttin’ Heads? Did you base the main characters off anyone you know?

Cutttin’ Heads is basically my homage to all my favourite music. It’s based on a mix of my own experiences of being in a band, and takes a lot of inspiration from the myths and legends of rock n roll. And yeah, a lot of people who I’ve been in bands with over the years may find a very slightly altered version of themselves in the story.

Jimi Hendrix, Mitch Mitchell and Noel Redding, the original lineup of The Jimi Hendrix Experience, so I could hear some awesome road stories, then kick back to my own private gig.

JRR:  Great list!  Which book have you always meant to get around to reading, but still not read?

Well last year I bought the complete collection of Tarzan novels by Edgar Rice Burroughs for 99p in the Kindle store. I’m about halfway through those, and plan to finish the entire collection someday.

JRR:  What’s the best advice you have ever received?

I didn’t receive it personally, but I always liked the Jack London quote, “You can’t wait for inspiration. You have to go after it with a club.”

JRR: Great quote!  Thank you for your time with this interview! 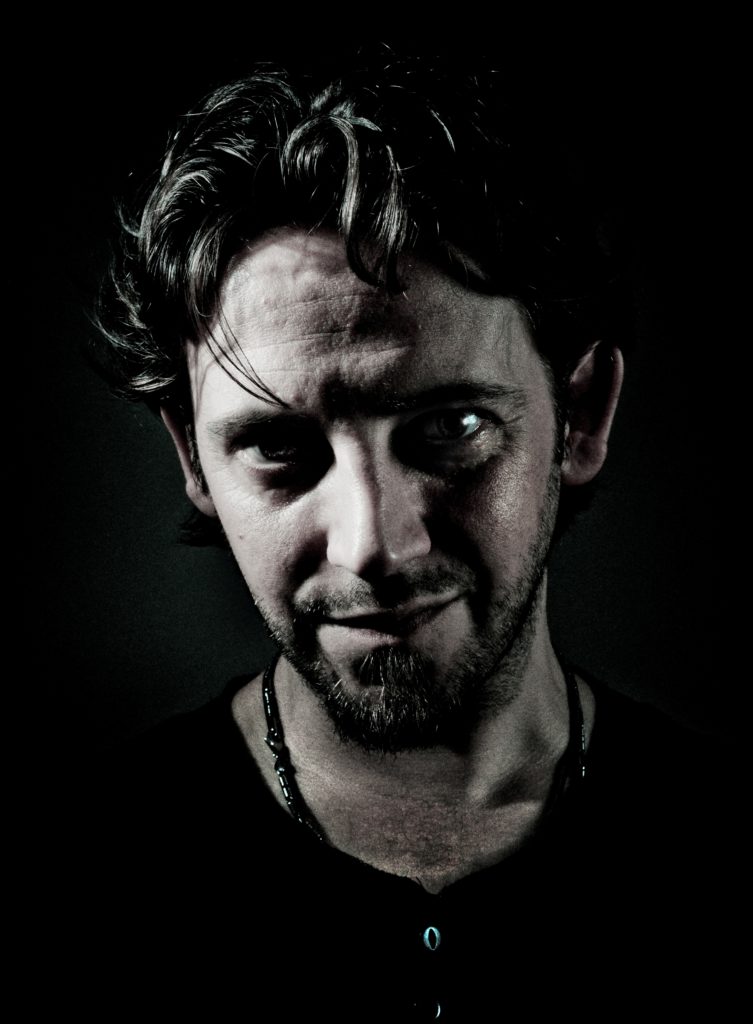 Prizewinning author D.A. Watson spent several years working in bars, restaurants and call centres before going back to university with the half-arsed plan of becoming a music teacher. Halfway through his degree at the University of Glasgow, he discovered he was actually better at writing, and unleashed his debut novel, In the Devil’s Name, on an unsuspecting public in the summer of 2012. Plans of a career in education left firmly in the dust, he later gained his masters degree in Creative Writing from the University of Stirling.

He has since published two more novels, The Wolves of Langabhat and Cuttin’ Heads, a handful of non-fiction pieces, several short stories including Durty Diana, which was nominated for a Pushcart Prize in 2016, and the Burns parody Tam O’ Shatner, which in 2017 came runner up in the Dunedin Robert Burns Poetry Competition, and was a competition winner at the Falkirk Storytelling Festival.

He lives with his family in Western Scotland.

“The Christoper Brookmyre of horror. Readers will be very very afraid.”  – Louise Welsh, bestselling author of the Plague Times trilogy

*Terms and Conditions –Please enter using the Rafflecopter box above.  The winner will be selected at random via Rafflecopter from all valid entries and will be notified by Twitter and/or email. If no response is received within 7 days then I reserve the right to select an alternative winner. Open to all entrants aged 18 or over.  Any personal data given as part of the competition entry is used for this purpose only and will not be shared with third parties, with the exception of the winners’ information. This will passed to the giveaway organiser and used only for fulfilment of the prize, after which time I will delete the data.  I am not responsible for despatch or delivery of the prize.