Today I will be sharing a guest post written by the author for my spot on the blog tour for Five Wakes and A Wedding by Karen Ross. She will be sharing about jobs.  Do we choose them, or do they choose us? This has to do with Nina, our protagonist in this novel.

Nina is your average 30-year-old with a steady job, a nice home – and dead bodies in her basement. As an undertaker, she often prefers the company of the dead to the living – they’re obliging, good listeners and take secrets to the grave.

Nina is on a one-woman mission to persuade her peers that passing on is just another part of life. But the residents of Primrose Hill are adamant that a funeral parlour is the last thing they need… and they will stop at nothing to close down her dearly beloved shop.

When Nina’s ‘big break’ funeral turns out to be a prank, it seems like it’s the final nail in the coffin for her new business. That is, until a (tall, dark and) mysterious investor shows up out of the blue, and she decides to take a leap of faith.

Because, after all, it’s her funeral…

The perfect antidote to all those books about weddings, this book will make you laugh until you cry, perfect for fans of Zara Stoneley’s Bridesmaids, Four Weddings and a Funeral and The Good Place. 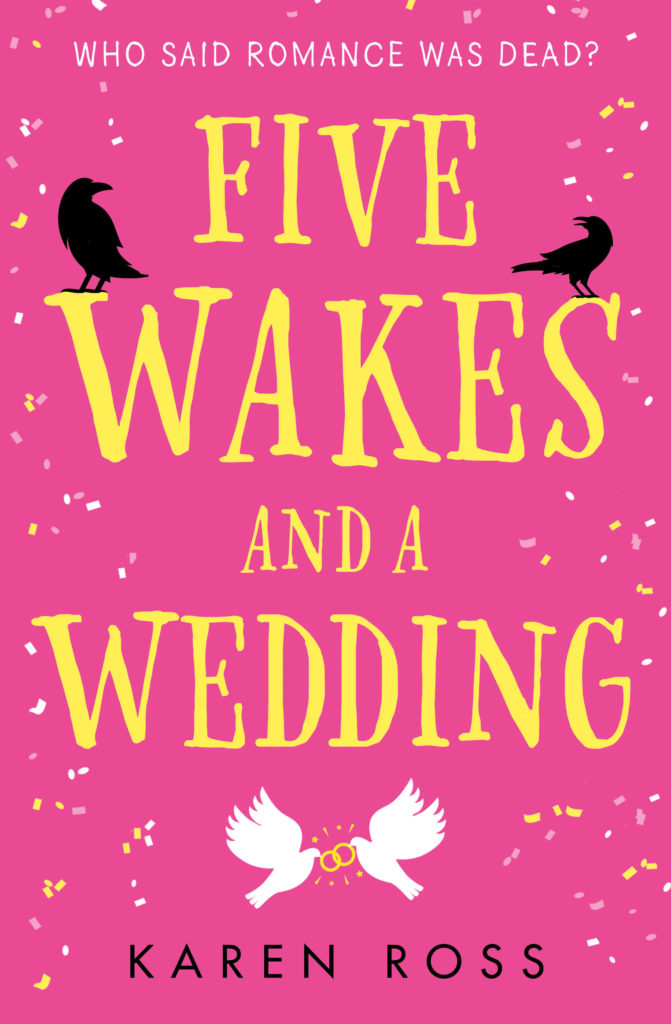 Jobs.  Do we choose them, or do they choose us?

It’s a question I asked myself about the protagonist of my new novel, Five Wakes and a Wedding.  Why did thirty-year-old Nina Sherwood become an undertaker?

When I started writing my romantic comedy noir, I had a vague idea.  But it wasn’t until I was well into the story, that all became clear.

Nina’s having supper with Kelli, a new friend.  After a couple of drinks Kelli asks the inevitable question about Nina’s job, and Nina explains about her best friend at university, who died of meningitis:

‘I went to Glasgow for the funeral and even though I’d never seen a dead body before – unless you count a budgie and a couple of guinea pigs – I needed to see Lin beforehand. To say sorry . . . and to say goodbye.’

‘You poor girl,’ Kelli says softly. ‘And that’s why you became an undertaker?’

‘No. Sorry. Haven’t got to the point, yet.’ Despite myself, I smile. ‘I was so terrified at the thought of having to go into that room and look at Lin. Didn’t know if I was going to faint. Or throw up. My heart was thumping so hard they must have heard it in the Highlands. The coffin was set up beneath a window in the corner of the room. Eventually I managed to look. And there she was. Except she wasn’t.’

I see it again, now. Yes, Lin did look as if she was asleep. People had been right about that.

‘For a start, Lin hated pink lipstick,’ I say. ‘Cherry Lush was her colour. That was the first thing I noticed. Then the nails. She always wore navy blue nail varnish, but that was gone, too. And the silver earrings she wore every single day. As for her hair, someone had inserted a parting into her curls and flicked the ends. It looked so weird. And her clothes. All brand new. Lin looked as if she was off to a job interview.

‘As for the funeral itself, it was dreadful. Just plain wrong. They chose “All Things Bright and Beautiful”, “I Vow to Thee My Country”, and “Love Divine, All Loves Excelling”. I stood there mouthing the words along with everyone else but all I could think was how Lin would have hated her parents’ playlist. She was so much more of a “Dancing Queen” kind of a girl.’

Kelli touches my hand, nudges me back to the present. ‘So you became an undertaker after you graduated?’

‘I dropped out.  Did a backpacking thing to India. It felt good to be in a place where nobody knew me. But eventually, I knew it was time to go home and work out what I was going to do next. I saw an advert that asked if I had ever considered a career as an undertaker. Which, until then, I hadn’t. But it was my chance to apologise properly to Lin. I wanted to do whatever I could to make sure a funeral reflected at least something about the person whose life had ended.’

We sit in reflective silence, until Kelli says, ‘Sometimes, you don’t choose a job. It chooses you. And in a manner of speaking,’ she continues, ‘you became a social worker, with or without a degree. You do everything you can to protect the integrity of someone who’s died. You work with people who are going through a crisis. Help them come to terms with grief and loss. And I bet you’re always there if they want to talk to you any time after the funeral.’

Social work for dead people. I’ve never thought of it quite like that.

And why did I become a writer?  Well I love putting words down on paper, trying to make sense of the world around me.  I also enjoy making people laugh.

Five Wakes and a Wedding has given me scope to explore an important, zeitgeisty topic – the way in which funerals are changing and becoming more individual, rather than a one-size-fits-all – while including a fun storyline that places the book firmly in the romantic comedy genre.

If you decide to take a look, I’d love to know what you think:  karen@karenross.online 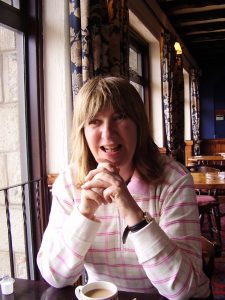 As a former journalist, broadcaster and advertising copywriter, Karen Ross has followed a fairly traditional path into writing fiction.   Five Wakes and a Wedding is her fourth book, and like its predecessors, the novel has two common threads:  the setting is London’s Primrose Hill – Karen’s own neighbourhood – and one of the characters is a dog . . . this time he’s called Chopper and he’s almost the same size as a Shetland Pony

Karen has been self-employed for many years, and continues to work as a marketing consultant, in the absence of an offer to manage Tottenham Hotspur.  By way of credentials, her other ‘job’ is trading profitably on the world’s first football stockmarket, a platform called Football Index, where you buy and sell players with real money.