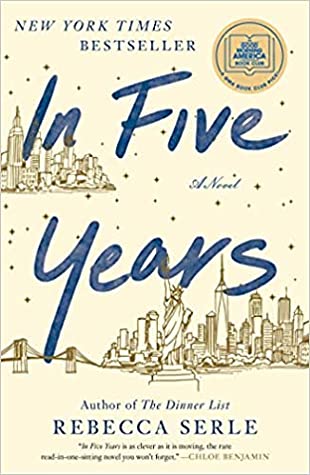 Where do you see yourself in five years?

When Type-A Manhattan lawyer Dannie Kohan is asked this question at the most important interview of her career, she has a meticulously crafted answer at the ready. Later, after nailing her interview and accepting her boyfriend’s marriage proposal, Dannie goes to sleep knowing she is right on track to achieve her five-year plan.

But when she wakes up, she’s suddenly in a different apartment, with a different ring on her finger, and beside a very different man. The television news is on in the background, and she can just make out the scrolling date. It’s the same night—December 15—but 2025, five years in the future.

After a very intense, shocking hour, Dannie wakes again, at the brink of midnight, back in 2020. She can’t shake what has happened. It certainly felt much more than merely a dream, but she isn’t the kind of person who believes in visions. That nonsense is only charming coming from free-spirited types, like her lifelong best friend, Bella. Determined to ignore the odd experience, she files it away in the back of her mind.

That is, until four-and-a-half years later, when by chance Dannie meets the very same man from her long-ago vision.

Brimming with joy and heartbreak, In Five Years is an unforgettable love story that reminds us of the power of loyalty, friendship, and the unpredictable nature of destiny.

Dannie Kohan has her life planned out and her 5-year plan is headed straight in the direction it should be going: She just got a very important job and her boyfriend proposed to her. She goes to bed very happy. But then she wakes up in a different apartment with a different ring on her finger, and a different man in the picture!  And what’s shocking is that it is the same night but five years in the future!  After an hour she awakes again back in 2020, but she can’t get this dream out of her head as it did not seem like a dream.  She made a note of everything and then moves on with life… until four and a half years later Dannie still isn’t married and she meets the man from her long-ago dream/vision/ what was that she experienced!?!?!? After meeting said man, Dannie becomes determined to keep her vision from becoming reality. But life has its own plan for Dannie and those around her.

Wow, don’t let the book description fool you, the ‘time travel’ element is an important part of the novel, but this story is about love and friendship.  And it becomes heart-breakingly apparent where this novel will go.  And the reader better get ready for a roller coaster of emotions that they will feel and possibly cry or at least tear up for.

If you are afraid that In Five Years will be a cheating/ love triangle romance story, it is not.  It explores fate, life, friendship and romantic partnerships that leave you thinking about long after you have finished the novel.  This emotional journey will let the readers know who is important to them by the end of reading, and they might just want to reach out to someone after reading this one.

In Five Years is one every reader should read.