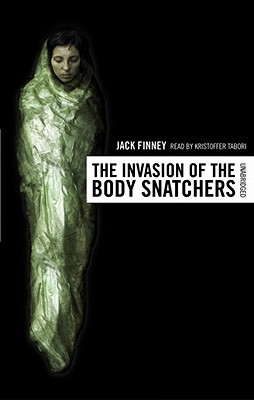 On a quiet fall evening in the small, peaceful town of Mill Valley, California, Dr. Miles Bennell discovered an insidious, horrifying plot. Silently, subtly, almost imperceptibly, alien life-forms were taking over the bodies and minds of his neighbors, his friends, his family, the woman he loved—the world as he knew it.

First published in 1955, this classic thriller of the ultimate alien invasion and the triumph of the human spirit over an invisible enemy inspired the acclaimed 1956 film, directed by Don Siegel and starring Kevin McCarthy, one of Time magazine’s 100 Best Films.

I listened to this book on audio and I really enjoyed it! I had seen the old movie several years ago, so I remembered the bare bones of the story. It’s definitely subtle horror, but horror none the less! It was a little too slow for me at the beginning, but then it picked up till the very end. The concept of being replaced by whatever these pods created was pretty scary and the feeling of utter helpless really sold this story. It’s not very long and very easy to read. Finney even opens it by saying that there aren’t many answers given and it left many loose ends, so I was actually worried I wasn’t going to like it. Sure I’d love to know the history of these seed pods, but I was happy with the information given and I really enjoyed the story!