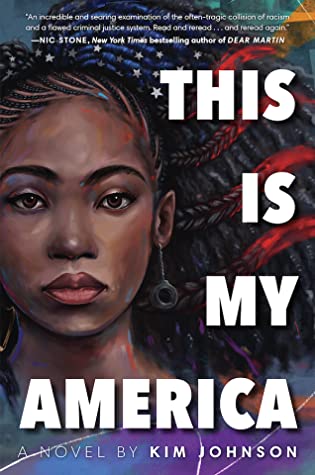 Every week, seventeen-year-old Tracy Beaumont writes letters to Innocence X, asking the organization to help her father, an innocent Black man on death row. After seven years, Tracy is running out of time—her dad has only 267 days left. Then the unthinkable happens. The police arrive in the night, and Tracy’s older brother, Jamal, goes from being a bright, promising track star to a “thug” on the run, accused of killing a white girl. Determined to save her brother, Tracy investigates what really happened between Jamal and Angela down at the Pike. But will Tracy and her family survive the uncovering of the skeletons of their Texas town’s racist history that still haunt the present?

I had this novel selected to read for April’s #Diverseathon prompt, which is a character who is not Caucasian. I DID finish it in April, I just did not get the review written by the end of the month.  But it still counts!

This is My America is a novel that was published last year and is very timely with what was going on with our country.  This is My America centers on Tracy and the Beaumont family.  Seven years ago her father was convicted for double murder and sentenced to the death penalty; he is innocent and has only 267 days left, so his time is running out.  Every week Tracy has written to Innocence X to try and receive help in her father’s case to no answer.  Then the unexpected happens, a white girl is killed and Tracy’s brother Jamal is a suspect. And up to this moment he has never been in trouble with the law and had a very promising future.  Jamal is on the run and now Tracy is determined to help both her father and now her brother.

This is My America is Johnson’s debut novel and what a debut it is! It shows how incarnation affects every member of the convicted’s family and the injustices of African Americans.  Johnson also shows us what it is like inside and visiting a convicted inmate in Texas.  It also shows some history into the KKK and how that organization still exists today and what they can do.  Johnson touches on so many important subjects and reaches her readers with very likable and enduring characters that you can’t help but feel emotions for.

Written in short chapters, this is one novel you don’t want to put down as the reader becomes fully invested in the story and is rooting for Tracy to succeed in both her father and now brother’s cases.    Be sure to read the author’s note at the end of the novel.  Though Innocence X is a fictional organization, Johnson mentions actual organizations out there that work to free those wrongly convicted.  I adore Tracy and her bravery at doing everything she can.  She is a character that young girls could look up to.

This is My America is one that needs to be read by all teens and touches on so many important subjects that our nation is dealing with more every day.  This novel is up there with Dear Martin for me and may in fact even pass it in my reading. I cannot wait to see what Kim Johnson writes next!