Today I am helping in the cover reveal for The Final Trail by AA Abbott! This is the fifth book in The Trail series. It is time for a double celebration: Today is also release day!!!  So you can go ahead and buy it now!!!

Family feuds just got bloodier… A gripping thriller, and a great story of death, revenge and vodka.

To save glamorous Kat White’s life, Ben Halloran killed his gangster father. Now his brother wants to even the score. 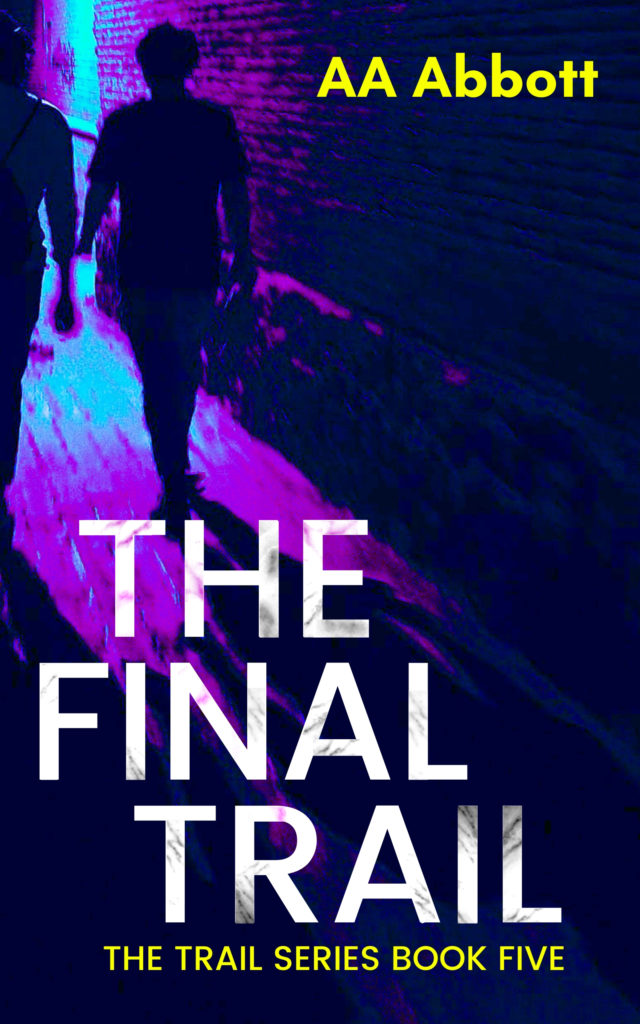 Birmingham has well and truly been put on the crime thriller map with the success of the TV series Peaky Blinders but for bookworms amongst us the popular Trail Series has long brought readers into the modern day 21st century with its tense storylines, murder and intrigue set in and around the city.

The Trail series features a vodka business, a cancer cure and obsessive killers. Every book is a good read in its own right – each is a great crime story with terrific twists to keep the tension mounting – but together, they follow the same characters over several years.

The Trail series author AA Abbott also known as Helen Blenkinsop, has been compared with the likes of Ruth Rendell, John Grisham and Jeffrey Archer.  She lived and studied in Birmingham for nearly 20 years and her passion and love for the city became the inspiration for the Trail series.

Now, after four successful editions the last storyline will be revealed in the publication of THE FINAL TRAIL which will be launched in Birmingham on 28th October.

In the last book …”Glamorous Kat White has built a successful craft vodka brand in Birmingham, but she has an uneasy relationship with her business partner, Marty Bridges. Her mother had previously supplied with poisonous vodka. Marty doesn’t trust Kat, resents having to depend on her for commercial success, and isn’t thrilled that his eldest son wants to marry her. That’s not his biggest problem, though. He’s trying to develop a cancer drug with Kat’s brother, Erik, and it’s draining money he doesn’t have. Just as he finds an investor with pockets deep enough to fund their research, Erik is lured to the former Soviet Union and thrown into jail. Meanwhile, Ben Halloran, who killed his father to save Kat’s life, is faced with the twin risks of a murder charge and his brother’s deep-seated desire for revenge. Can Ben escape with his life and liberty? And can Marty save both Erik and his business – and learn to trust Kat?”

Helen said “I’ve been writing about these amazing characters for over 5 years, so you can imagine, they have become a part of my life. It’s been a great journey and they have come through so many storylines that it feels right for them to achieve their dreams at last.”

Most of the action in THE FINAL TRAIL takes place across the city and features the famous Rose Villa Tavern and 1,000 Trades in the Jewellery Quarter; The Mailbox, home to the BBC in Birmingham, Holloway Head by the famous Pagoda Island and locations in Harborne and Edgbaston.

Helen added “It’s going to be very sad to launch the last book as the stories and characters have built up such a following but it will give me the opportunity to weave new and exciting tales – I have so many ideas buzzing in my head.”

THE FINAL TRAIL is a perfect read for those who like a fast-paced crime thriller combined with suspense, humour and plot twists.  It’s ideal to take away on holiday and provides a great read during the autumn/winter nights.

THE FINAL TRAIL will be available to order from Amazon in e-book, paperback and dyslexia-friendly format from Monday 28th October 2019.