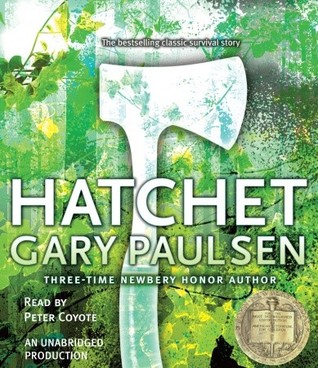 Thirteen-year-old Brian Robeson is on his way to visit his father when the single-engine plane in which he is flying crashes. Suddenly, Brian finds himself alone in the Canadian wilderness with nothing but a tattered Windbreaker and the hatchet his mother gave him as a present—and the dreadful secret that has been tearing him apart since his parents’ divorce. But now Brian has no time for anger, self-pity, or despair—it will take all his know-how and determination, and more courage than he knew he possessed, to survive.

I read Hatchet as a part of #Diverseathon2021 for May’s prompt, which is books set in Canada.

The target audience of Hatchet is middle schoolers, in fact I read this in school. We don’t get too many books from a boy’s perspective, but we get Brian Robeson in Hatchet. Brian is just 13 years old and going through his parents’ divorce. He focuses on the divorce a lot in the beginning part of the novel, but then a teenager his age would as his world is falling apart with this divorce and “the secret”.

Brian is on his way to see his dad and is flying in a plane when the pilot has a heart attack and dies. Eventually the plane crashes in the Canadian wilderness and Brian is forced to survive. Hatchet is also a coming of age novel as Brian starts the novel as one person and ends the novel as a totally different person.

Brian is relatable and likeable as he struggles to survive and learns to live on his own.  He goes through all the emotions one would have surviving a plane crash to seeing possible rescue and then eventually coming to the conclusion that he may actually not be rescued.

Paulsen’s writing is very detailed with surviving in the wilderness talking about everything from skunks down to the mosquitoes.  Paulsen did not hold back with the details, yet it was still not gruesome for the targeted age group (Seeing the pilot’s skull after being under water for nearly two months and Brian realizing he was eating the fish that ate the pilot) You are going through Brian’s journey with him and it makes you think: “Would I know what to do and survive?”

Peter Coyote is the perfect narrator for Hatchet.  He has that ’radio voice’ where you could listen to him talk for hours: In fact I did for over 3.5 hours!   (HA!)

The only negative for me with the audiobook is that there is classical music that pops up at various times intending to enhance the drama of Brian’s situation, but as I was listening to this audiobook as I was driving, the music distracted me. I would be fine with Coyote’s narration only. The music is not  needed.