Kim read and reviewed this one a few months back and her review caused me to want to read it! My local library had it available on audiobook, and I was able to listen to it. 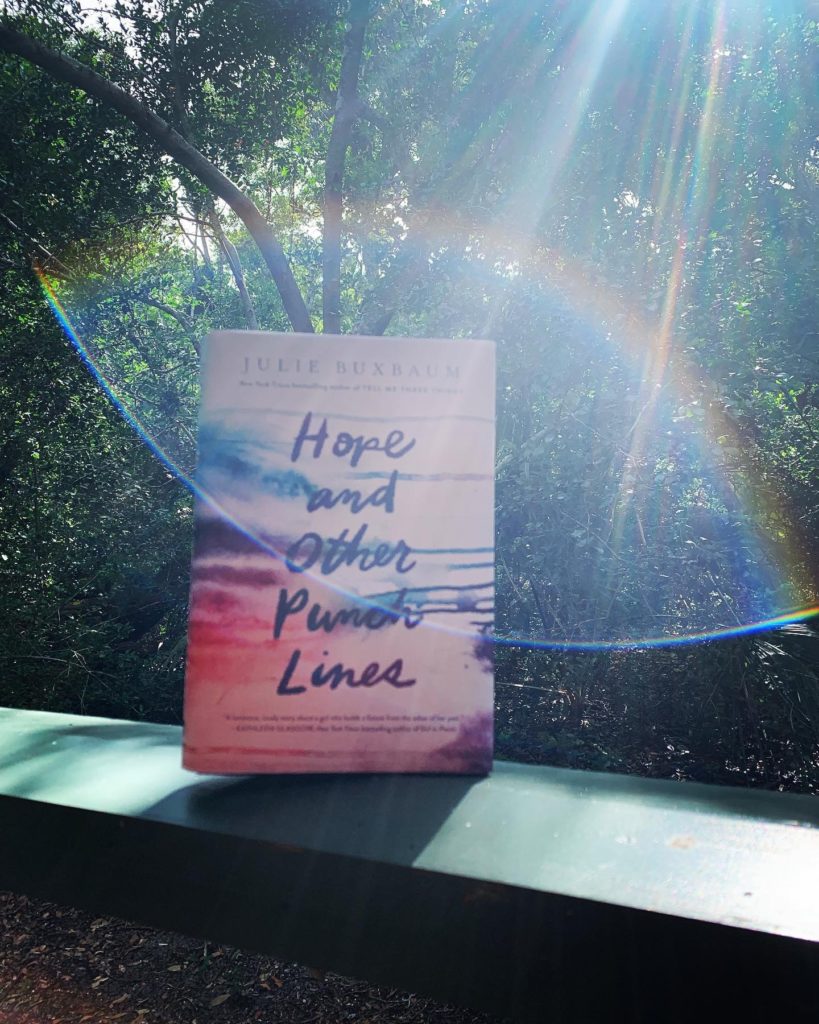 Sometimes looking to the past helps you find your future.

Abbi Hope Goldstein is like every other teenager, with a few smallish exceptions: her famous alter ego, Baby Hope, is the subject of internet memes, she has asthma, and sometimes people spontaneously burst into tears when they recognize her. Abbi has lived almost her entire life in the shadow of the terrorist attacks of September 11. On that fateful day, she was captured in what became an iconic photograph: in the picture, Abbi (aka “Baby Hope”) wears a birthday crown and grasps a red balloon; just behind her, the South Tower of the World Trade Center is collapsing.

Now, fifteen years later, Abbi is desperate for anonymity and decides to spend the summer before her seventeenth birthday incognito as a counselor at Knights Day Camp two towns away. She’s psyched for eight weeks in the company of four-year-olds, none of whom have ever heard of Baby Hope.

Too bad Noah Stern, whose own world was irrevocably shattered on that terrible day, has a similar summer plan. Noah believes his meeting Baby Hope is fate. Abbi is sure it’s a disaster. Soon, though, the two team up to ask difficult questions about the history behind the Baby Hope photo. But is either of them ready to hear the answers?

All I can say about this book is this: WOW. September 11, 2001 is a day we will always remember as it is the day that changed the entire world: It was my senior year of college and I was in an 8am class. We had no idea that anything had happened until people started showing up for the 9:15 class. We still had that class but then I ran to my dorm room and saw the second building fall. I ran to the campus safety class where I was a student worker as ‘my boss’ the campus safety director was from New York. I spent the rest of the day in the Student Union Building.

Hope and Other Punch Lines  is a powerful book that talks about that day and its aftermath.  Abbi Hope Goldstein is “Baby Hope” who was one year old at the time of the attacks. She is ‘famous’ for a picture that was taken of her while in the background one of the World Trade Center buildings is collapsing.

Abbi just wants to live as normal a life as possible despite being sick at times and not being recognized for this picture she had no control of.  She is trying to have a normal summer being a camp counselor when she is recognized as Baby Hope by Noah. The two team up to find out more about the picture of Baby Hope as Noah also experienced tragedy on that day that he will also not remember.  As they work together they discover things they never even imagined possible.

Hope and Other Punch Line is very powerful for those who experienced 9/11 and will also help those who will only learn about that terrible day from history books.  We see the attitude difference just 15 years makes between those who lived it and those who have to learn about it.

I did not cry while listening to the audiobook, but you can’t help but remember that day and the emotions you felt, and characters in the book experience these same emotions.

This is a book everyone should read.