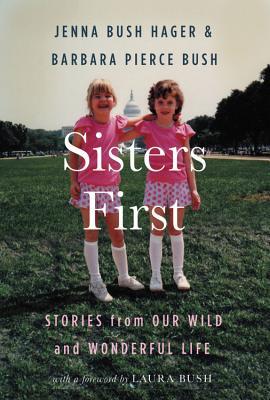 Born into a political dynasty, Jenna and Barbara Bush grew up in the public eye. As small children, they watched their grandfather become president; just twelve years later they stood by their father’s side when he took the same oath. They spent their college years watched over by Secret Service agents and became fodder for the tabloids, with teenage mistakes making national headlines.

But the tabloids didn’t tell the whole story. In SISTERS FIRST, Jenna and Barbara take readers on a revealing, thoughtful, and deeply personal tour behind the scenes of their lives, as they share stories about their family, their unexpected adventures, their loves and losses, and the sisterly bond that means everything to them.

Born into the Bush dynasty, Barbara and Jenna Bush were never going to have a normal life, despite their parents attempting that very fact. And their parents succeeded in that as much as possible. From the moment they were born they were in the public eye and will continue to be.

I am one year older than them, so I really enjoyed this memoir that both ladies co-wrote. Being the same age and growing up at the same time as them, I identified 100% with the ladies. I listened to the audiobook which they both narrated. Their mother Laura Bush narrates the prologue.

You think you know all about the Bush twins with their growing up in the news with Jenna’s troubles and them being in the tabloids, but you don’t. Through this short memoir the reader gets to know the ladies as they grow up with their governor father, then their grandpa becoming President then guess what? Daddy becomes president too! We experience their growing up, their rebellious sides, their heartaches, and fears with 9/11. We see them mature into the ladies they become from the girls they were. The reader also gets to know the Bush family more through this memoir. They have become more like people and less like politicians for me.

We get to experience the beginning of Jenna’s relationship with her now husband. Imagine how he must have felt going to the white house to take out the president’s daughter. Don’t forget, Secret Service agents follow them EVERYWHERE.

There is a sixth disc that includes family pictures that I enjoyed looking at.

No matter your political opinions on the family, this is a memoir everyone should read, because despite everything, The Bush twins are Sisters First.