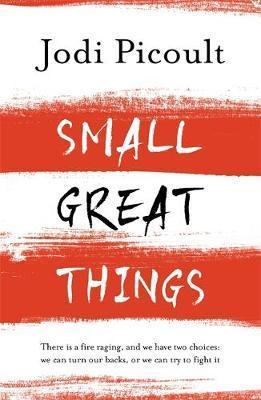 This is a very intense and difficult read and it will be just as difficult to review because it deals with very sensitive topics: Race and prejudice.  We have three points of view throughout the novel:

Ruth Jefferson- An African American nurse with over 20 years of experience.
Turk Bauer- The father of the newborn and white supremacist.
Kennedy McQuarrie- A white public defender.

We learn about their pasts as well as the current chain of events.  We also meet their families through their backstories.  Turk is very much a character of pure hate.

Everything with Small Great Things is compelling. You have no idea how Picoult is going to end this story.  The trial is engrossing and I wanted to continue listening to the audiobook.  The climax and ending come out of left field and were so extreme that it was unfortunately not believable.  ‘Stage Three’ which also serves as the Epilogue gave me some chills.

This is a novel that will keep you thinking about the issue of race long after you have finished it.  There is also an important Author’s Note which I would tell you to read.  Picoult took a risk being a white woman and writing on the issue of race from an African American woman’s perspective, but handled it with grace and well researched with interviews.

In addition to listening to the audiobook, I also have a UK paperback edition.  This included a short story from Ruth’s childhood where she also dealt with the issue of race. This short story shows how cruel children really can be.

Despite the unbelievable ending, Small Great Things is recommended.  It is supposed to become a movie as some point and I will watch it.