This week Kim reviews the Gemma Doyle Trilogy by Libba Bray. She liked it and recommends this series to anyone who enjoys Fantasy and Historical Fiction.  This is also YA, and teens will be teens and sometimes we know what Kim thinks of teens  in these books by now!  😉 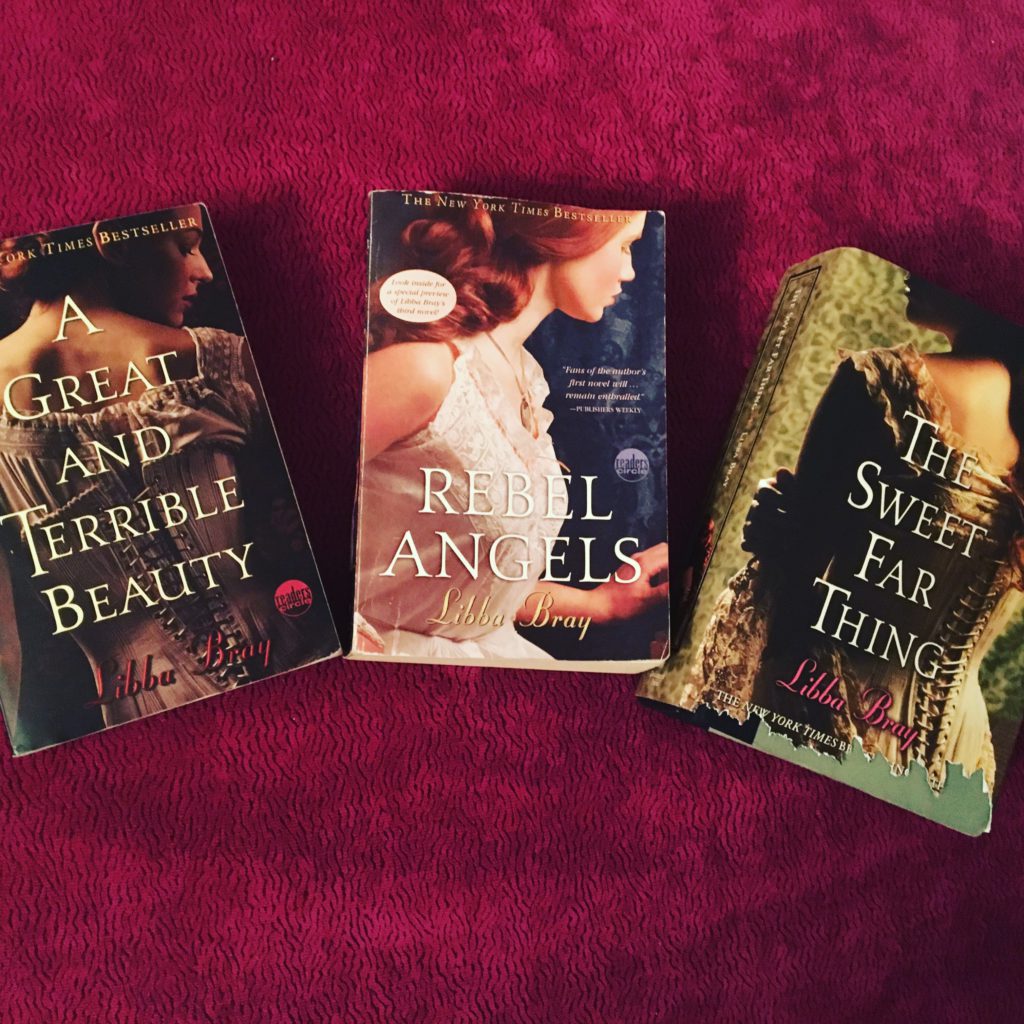 Books in the Series:
A Great and Terrible Beauty
Rebel Angels
The Sweet Far Thing

A Great and Terrible Beauty: It’s 1895, and after the suicide of her mother, 16-year-old Gemma Doyle is shipped off from the life she knows in India to Spence, a proper boarding school in England. Lonely, guilt-ridden, and prone to visions of the future that have an uncomfortable habit of coming true, Gemma’s reception there is a chilly one. To make things worse, she’s been followed by a mysterious young Indian man, a man sent to watch her. But why? What is her destiny? And what will her entanglement with Spence’s most powerful girls—and their foray into the spiritual world—lead to?

Rebel Angels: Gemma Doyle is looking forward to a holiday from Spence Academy—spending time with her friends in the city, attending balls in fancy gowns with plunging necklines, and dallying with the handsome Lord Denby. Yet amid these distractions, her visions intensify—visions of three girls dressed in white, to whom something horrific has happened that only the realms can explain. The lure is strong, and soon Gemma, Felicity, and Ann are turning flowers into butterflies in the enchanted world that Gemma takes them to. To the girls’ great joy, their beloved Pippa is there as well, eager to complete their circle of friendship. But all is not well in the realms—or out. Kartik is back, desperately insisting to Gemma that she must bind the magic, lest colossal disaster befall her. Gemma is willing to comply, for this would bring her face-to-face with her late mother’s greatest friend, now Gemma’s foe—Circe. Until Circe is destroyed, Gemma cannot live out her destiny. But finding Circe proves a most perilous task. . . .

The Sweet Far Thing: It has been a year of change since Gemma Doyle arrived at the foreboding Spence Academy. Her mother murdered, her father a laudanum addict, Gemma has relied on an unsuspected strength and has discovered an ability to travel to an enchanted world called the realms, where dark magic runs wild. Despite certain peril, Gemma has bound the magic to herself and forged unlikely new alliances. Now, as Gemma approaches her London debut, the time has come to test these bonds. The Order—the mysterious group her mother was once part of—is grappling for control of the realms, as is the Rakshana. Spence’s burned East Wing is being rebuilt, but why now? Gemma and her friends see Pippa, but she is not the same. And their friendship faces its gravest trial as Gemma must decide once and for all what role she is meant for.

I read the whole series! And the third book is like 800 pages! I did enjoy these books. The story was unique, and I like some of the characters. The sad thing about this series is that I hate all the main characters. Gemma is like grass in the wind. No matter what her gut or her brain tells her, even when she knows that something is wrong, even when she knows the right way is the complete other direction, she lets everyone else dictate what she does. Her friends can easily manipulate her. The people that she should respect and listen to are ignored completely and often scorned, but whenever her friends start whining, she lets them have and do whatever they want.

Felicity and Pippa are nothing but spoiled brats who see Gemma as someone to use and manipulate and that never changes. Ann is nothing but a whining doormat. Whoever decided to gift these girls with magic and the fate of the realms needs to have his/her/its head examined. Thankfully there are other characters that I like much better, who saved the story for me. Kartik is my favorite! He stays steady and consistent throughout the whole series. Although his loyalties do shift, he never waivers. Mother Elena and Brigid are sweet women who genuinely care about the people around them. Even Circe is a consistent character that I ended up respecting by the end! The story itself is very intriguing.

Unfortunately, it went far too long because just when Gemma figures out what needs to be done, the other girls convince her to wait and do something completely unnecessary for another 30 pages. I think there is a lot that could be shaved down. I do like the subplot of true feminism. That girls shouldn’t be viewed as pretty breeding stock, but as people who are capable of thinking and providing for themselves. There is real sexism in these books and Bray does a great job of using the characters to fight against it. Overall, this is an interesting series that I would recommend to anyone who likes Fantasy and to some who like Historical Fiction.