World War II is raging. Michael O’Shaunessey, originally from Ireland, now lives in Nazi Germany with his parents. Like the other boys in his school, Michael is a member of the Hitler Youth. But Michael has a secret. He and his parents are spies. Michael despises everything the Nazis stand for. But he joins in the Hitler Youth’s horrific games and book burnings, playing the part so he can gain insider knowledge. When Michael learns about Projekt 1065, a secret Nazi war mission, things get even more complicated. He must prove his loyalty to the Hitler Youth at all costs — even if it means risking everything he cares about. Including… his own life.

Loved this book so much! This is the kind of book that I would put on every teachers’ book shelf! History is never black and white. It’s usually very messy, especially during times of war and this book captures that perfectly! Michael has to come to terms with the fact that although he is helping the Allied war effort with all the information he is able to collect, he can’t help the Jew who is being beaten to a pulp right in front of him. It’s the perfect case of “the good of the many outweighs the good of the few, or the one.” And as Michael grows and matures all within the confines of Nazi Germany and the Hitler Youth, he also has to watch the boy that he protected and helped, turn into a monster. Gratz has figured out how to show the humanity of both sides of WW2. The men and women who history remembers as Nazi drones, following Hitler like he was the new Messiah, were all actually just people. People who were caught up in a fervor not their own, yet embraced with passion. As I said with Gratz’s other book, Prisoner B-3087, although Projekt 1065 is fiction, I would put it into the hands of any teenager to help them learn from and understand history. It is not a complicated read, I read it in one day, yet I enjoyed it so much! I would absolutely recommend this to anyone looking for a book about WW2, for any history teacher, and for any teen. 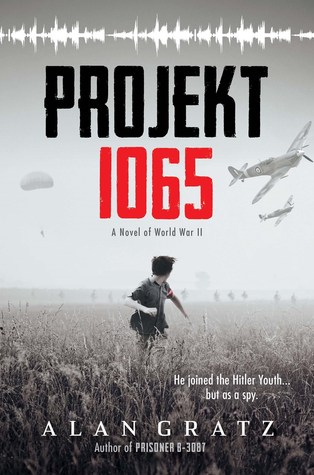