Today I am sharing my review of It Will Be Quick by Karl Drinkwater: This book is made up of a variety of short stories.  There will be something for everyone here!

A single decision can save – or ruin – a life.

An opportunistic baby theft by a young woman in pain. Two strangers shipwrecked on a lifeless rock, unable to speak the same language. An isolated cycling holiday descends into terror. One woman seeks the courage to destroy her life. A miracle unites a community, and teenagers take a stand against hypocrisy. 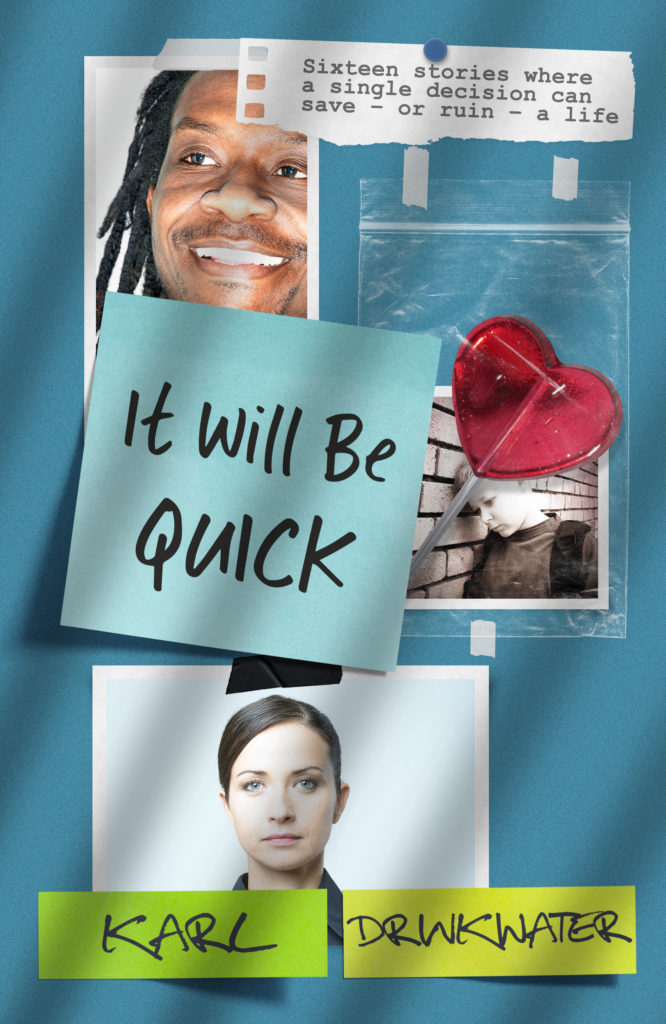 It Will be Quick
Author: Karl Drinkwater
Published: November 1, 2020
280 Pages

This collection of 16 short stories has something for everyone! All these tales center on a decision that is made and the story varies depending on that decision.  These stories will bring a variety of emotions to the reader, and each reader will have a favorite depending on how they feel at the time of reading It will be Quick.  My preferences are thriller focused, so my favorite story was FileKiller.  I was intently reading it and there was no way I could do what Trina did: I got anxiety just by reading this one!

The stories can range in length from a few pages to the longer ones.  Drinkwater also included notes at the end of the book on how and where each came from.  This adds to each of the stories and I enjoyed that. 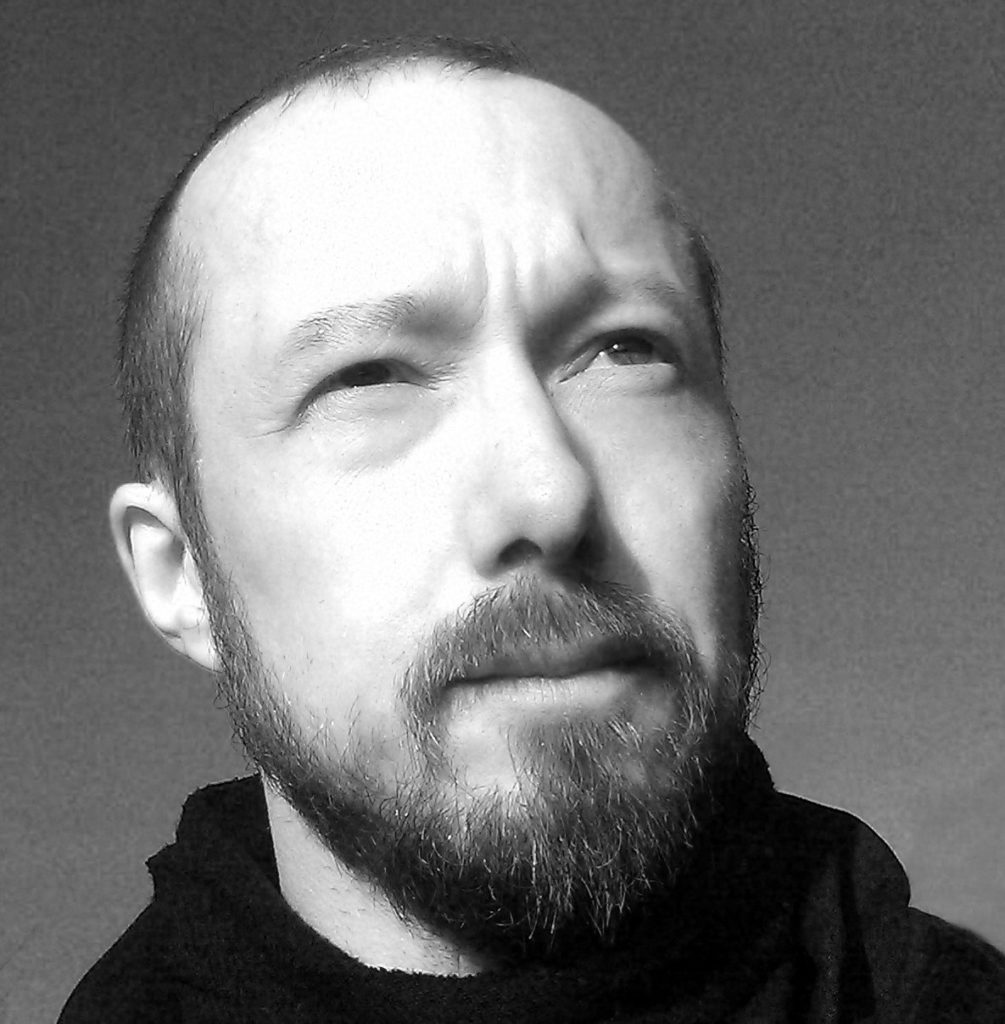 Karl has lived in many places but now calls Scotland his home. He’s an ex-librarian with degrees in English, Classics, and Information Science. He also studied astrophysics for a year at university, surprising himself by winning a prize for “Outstanding Performance”. Karl is an active member of the British Science Fiction Association (BSFA), the Horror Writers Association (HWA), and the Alliance of Independent Authors (ALLi).

When he isn’t writing he loves guitars, exercise, computer and board games, nature, and vegan cake. Not necessarily in that order.

As a part of the blog tour, today I share my review of Let’s Talk About Cats by Anita Kelsey.  As a mommy to three kitty furbabies, I was excited to read this one!  There is also a giveaway going on on Facebook.

Let’s Talk About Cats: Conversations on Feline Behaviour features 16 unique in-depth conversations with devoted feline experts, each chapter answering a question about our cats. An abundance of catty conversation points which provide many useful takeaways for cat owners to improve their own every-day connection with their cats.

This book, the first of its kind, presents the combined wisdom of experts from all over the world on the psychology, behaviour, diet and training of cats, in a relaxed and conversational style. Contributors include Jackson Galaxy, star of My Cat From Hell, and composer David Teie, whose ground-breaking album, Music for Cats, was released by the Universal Music Group.

Each illuminating chapter exudes a love for cats and a wealth of fascinating insights.

This book is packed with helpful advice, guidance and true stories from the author’s own professional experience of cat care topics, explaining the most important cat concepts, giving food for thought and expanding on all the most important issues and debates in the cat world. 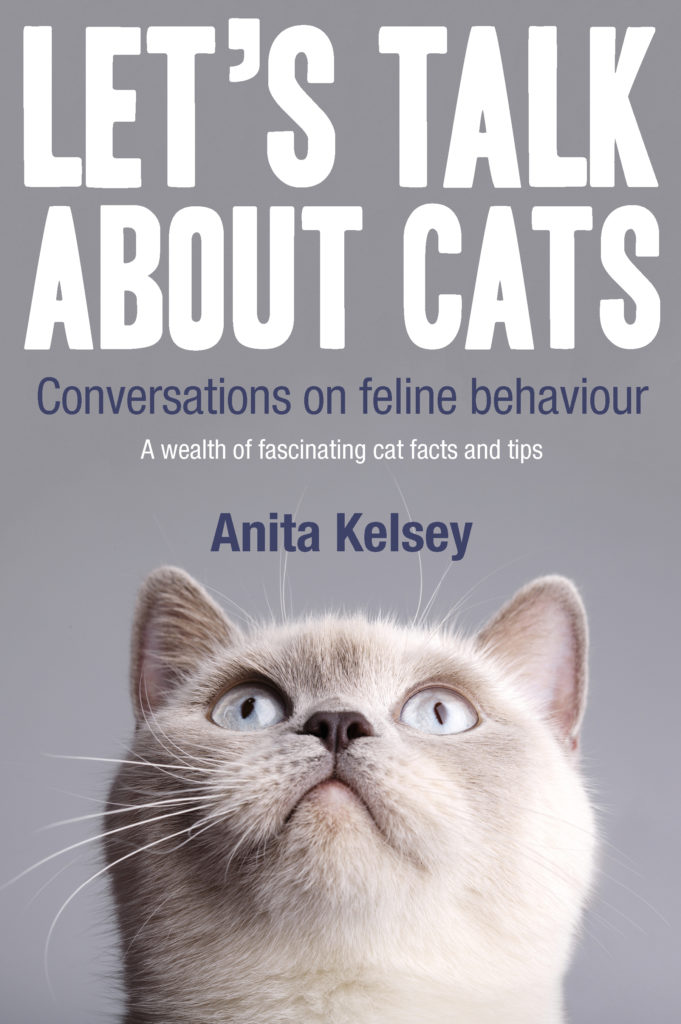 Let’s Talk About Cats is a nonfiction book by cat expert Anita Kelsey: She has a degree in Feline Behavior and Psychology, is a cat groomer, and more.  Needless to say, she knows what she is talking about.  She is based out of the UK, so the spellings of certain words are UK based (which I never have an issue with) and some of what is discussed would apply to UK readers more than US readers, but it is still a very well written book and I learned some things as well (I have only been a cat momma for 5 years and still constantly learning.)

Let’s Talk About Cats is 15 chapters of learning and one chapter of a ‘bookend’ telling us about The Cat Man of Aleppo.  Despite being in the UK she does talk with US based experts including Jackson Galaxy who hosted the television show My Cat From Hell. Each chapter of the book deals with a certain question that cat owners/guardians may have. There is a discussion with an expert of the question presented and also summary of what you have just read at the end of the chapter and there are also real life case situations that apply to the chapter.  Chapters include Why Does My Cat Scratch Furniture, What Should I Be Feeding My Cat, touching and giving cats attention, all the way to dealing with elderly cats and euthanasia.

Whether you are a new cat parent or experienced one, you will learn something from this book. Let’s Talk About Cats is for every cat parent and cat lover out there! 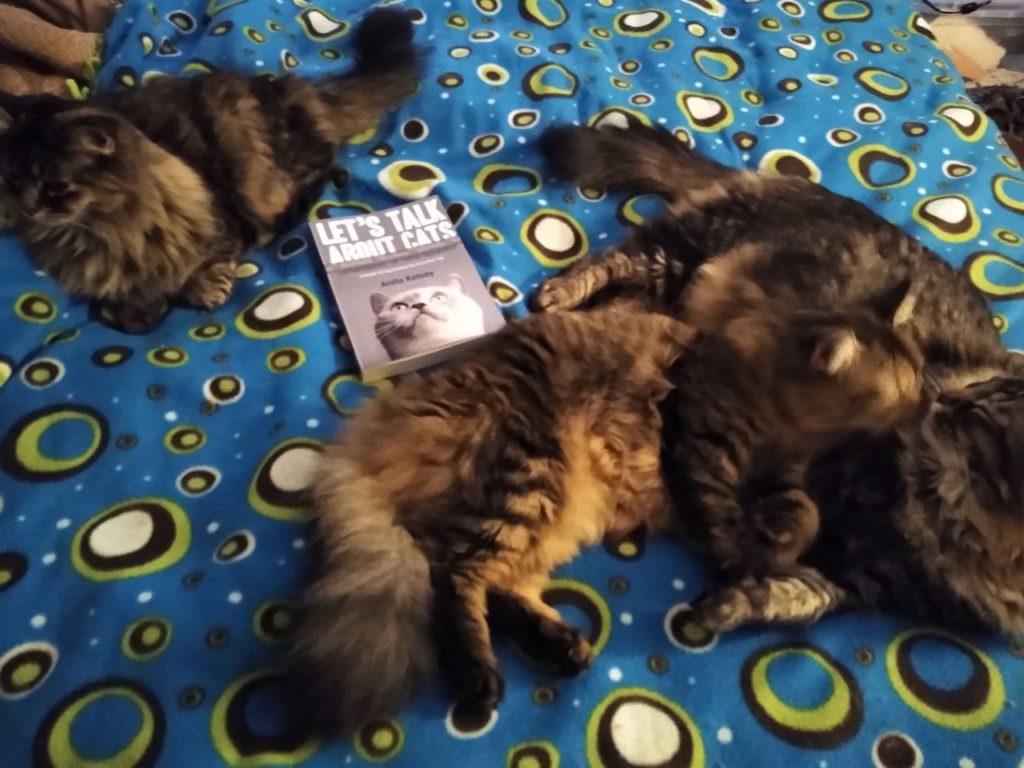 My three furbabies with Let’s Talk About Cats. They are in charge and do whatever they want! 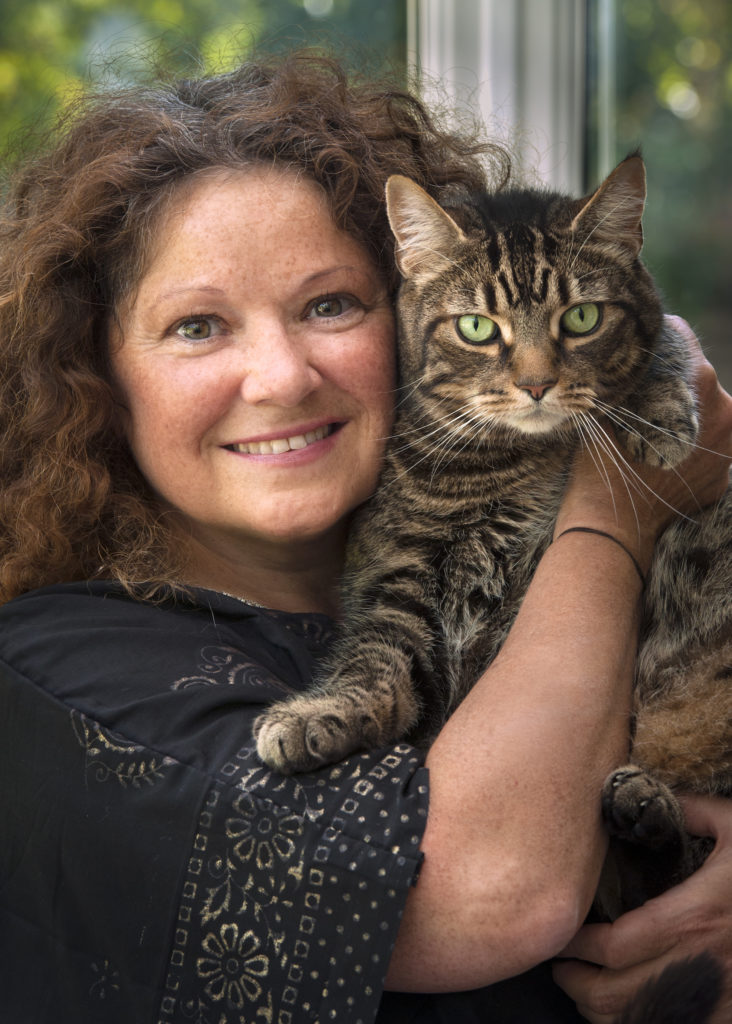 Anita Kelsey holds a first class honours degree in Feline Behaviour and Psychology (work based BA Hons) and runs a vet referral service dedicated strictly to the diagnosis and treatment of behaviour problems in cats. She is also a qualified cat groomer and specialises in grooming aggressive or phobic cats. Anita writes for Your Cat Magazine and is on their experts panel answering readers questions on cat grooming. She also advises on feline behaviour for the CFBA (Canine and Feline Behaviour) magazine as well as being a full member. Anita, a strong advocate of a vegan lifestyle, is based in London but consults all over the UK as well as international requests. She lives with her husband, a music producer, and two Norwegian Forest cats, Kiki and Zaza.

Her debut book ‘Claws. Confessions Of A Professional Cat Groomer‘ was published by John Blakes in 2018 and her second book Let’s Talk About Cats, Conversation On Feline Behaviour is due out November 28th 2020.

If anyone would like the chance to win a free copy of Let’s Talk About Cats plus some fun cat toys from Purrs In Our Hearts and 4Cats then join the Facebook group https://www.facebook.com/groups/letstalkaboutcats

There will be 5 fun cat photo competitions posted on 23rd Nov With the entries closing 4th Dec. **Rules and how to enter on the page. **