Today’s First Line Friday is one I received at  Walker Stalker Con in 2016. I met the author and was given a free copy that she signed! I have yet to read it (I know too many books and not enough time!) but hope to one day.

I was eighteen years young when I joined the United States Air Force, young being the operative word if you connect it to the word naive as I do. 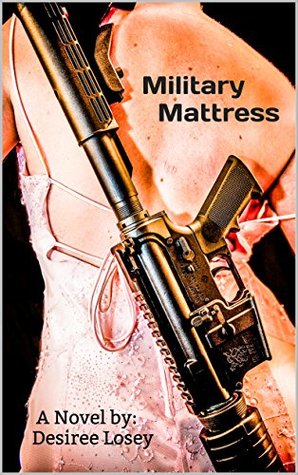 No one wants to be a military mattress, but being a woman in uniform comes with a stereotype. When Airman Swanson, an eighteen-year-old idealist, joined the Air Force she did so for two reasons: family and country. By the time she realizes the severity of her mistake, it’s too late. Contracts have been signed, and souls sold. Trapped, she must learn to navigate an unhinged reality. A world of vile crimes and turning heads; in which true camouflage is silence. Right is wrong, and wrong is…right?

With murder, prostitution and deception now commonplace, love is Airman Swanson’s new forbidden fruit. In order to survive she must go beyond all she thought herself incapable; she must divorce her own heart. Knowing the task is too difficult to do alone, she cleverly enlists the help of Sergeant Belinelli, a devilishly handsome former marine and notorious playboy; the kind of man who will rock your world one day, but forget your name the next. With his instruction and a string of lewd affairs, she becomes all that is necessary to be great: cold, calculating and dominate. There is just one problem; part of her heart (although well hidden) still lingers. Despite her newly found authority and inherent power, Airman Swanson secretly morns who she used to be. She must decide if love is worth the surrender of her potential, or if her career is worth her last ounce of benevolence. However, in a world where there are no clear answers, no matter what she chooses, she’s wrong.