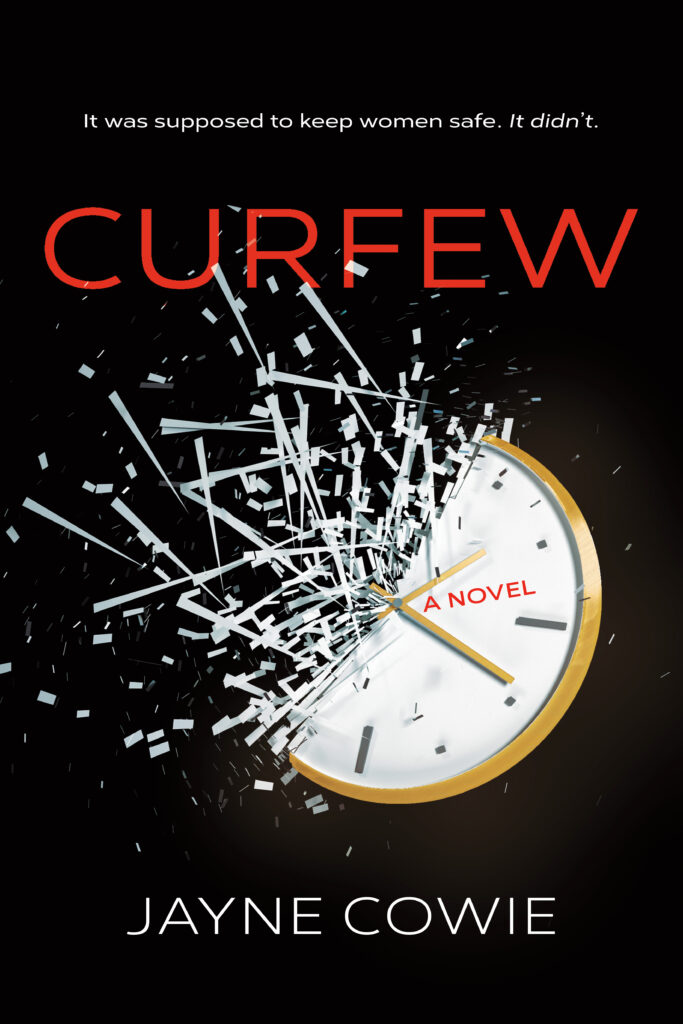 Think The Handmaid’s Tale but with the women in charge, set in a world where all men are electronically tagged and placed under strict curfew, and the murder investigation threatening to undo it all.

Imagine a near-future Britain in which women dominate workplaces, public spaces, and government. Where the gender pay gap no longer exists and motherhood opens doors instead of closing them. Where women are no longer afraid to walk home alone, to cross a dark parking lot, or to catch the last train.

Where all men are electronically tagged and not allowed out after 7 p.m.

But the curfew hasn’t made life easy for everyone. Sarah is a single mother who happily rebuilt her life after her husband, Greg, was sent to prison for breaking curfew. Now he’s about to be released, and Sarah isn’t expecting a happy reunion, given that she’s the reason he was sent there.

Her teenage daughter, Cass, hates living in a world that restricts boys like her best friend, Billy. Billy would never hurt anyone, and she’s determined to prove it. Somehow.

Helen is a teacher at the local school. Secretly desperate for a baby, she’s applied for a cohab certificate with her boyfriend, Tom, and is terrified that they won’t get it. The last thing she wants is to have a baby on her own.

These women don’t know it yet, but one of them is about to be violently murdered. Evidence will suggest that she died late at night and that she knew her attacker. It couldn’t have been a man because a CURFEW tag is a solid alibi.

Curfew is a dystopian novel set in the not-too-distant future of Britain.  In this world, women rule and men suffer by being tagged with an ankle monitor and under a curfew from 7pm-7am. If they break it they go to prison. The premise intrigued me and the feminist in me was ready to rock and roll in this world and see what happens!  Curfew gives us a different sort of world where it sucks to be a man.  Men are tagged starting at age 10, which is just hard to comprehend. There is a scene that shows a boy going to get his first tag that was a bit heartbreaking for me.

We start the novel with a body being found from overnight and it just doesn’t seem like a woman could have done it.  But men are under curfew and the police would have known right away if a man was outside after 7pm.  The mystery of who the victim is lasts for most of the novel and I kept changing my guess as to who the victim was.  She is one of several characters we meet and all the characters have a reason they could be our victim.

Curfew gives you a lot of things to think about. Would a world like this actually work? Would women actually be safe?  For me some of the rules/laws set up to help women also seemed to hinder women. I personally don’t see the concept of Curfew working and could never see society agree to something like this. But the way some things are headed you never know what might happen.

The novel does have ‘man bashing’ undertones to it which I looked past. I also had an issue with something that has to do with one certain character that I can’t say without spoilers.  For me, it just seemed to show how the whole tagging issue may not actually work.

I enjoyed this one and it would be a great book club read to get many kinds of conversations going, some of which might get heated.

Many thanks to the publisher for granting me an e-arc through NetGalley.

Purchase/Pre-Order Links:
Amazon US
Amazon UK (Will be published as After Dark on April 1, 2022)