Today as a part of the blog blitz, I am sharing an extract from A Prescription for Madness by Linda Fawke. This one looks intriguing with many things to leave you thinking and I hope to one day read it!

When successful business-owner Kate Shaw realises she is pregnant, after a fling with a previous lover, she has life-changing decisions to make. She needs to be in control of her life. Pregnancy in her fifties was never part of the plan. It becomes her secret.

The risks of having a baby at her age are clear but she struggles with the idea of an abortion. No-one understands her increasingly erratic behaviour as the preoccupation takes over her life.

Her marriage is precarious; the relationship with her former lover uncertain.

Is this the way to madness?

This is a gripping story about dark choices, gnawing discontent and the uncertainties of love. 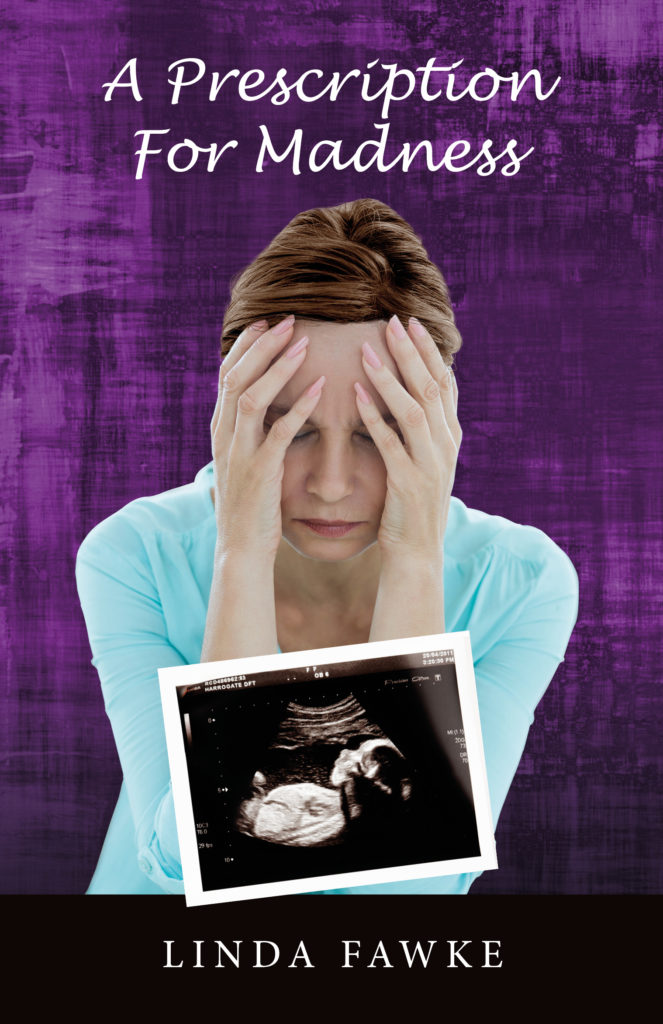 Info on the Extract from Chapter Three:

Kate, having discovered she is unexpectedly pregnant at the age of 51, wants someone to confide in and seeks help from her mother. Their relationship has never been close but Kate needs someone to talk to. Maybe not the best idea…

‘You’re a bit quiet today, Kate. Are you feeling alright?’

‘I’m not totally myself. In fact, there was something I wanted to talk to you about.’

Her mother sat upright as if someone had a gun to her back. She opened her eyes wide and put her hands to her cheeks.

‘You haven’t got some dreadful disease, have you? It’s not… you know … is it? Is it treatable? If it’s a matter of money, I’ll try to help. Don’t have much but you can have what there is. Private treatment is quicker. You shouldn’t wait around for some appointment months away. But you know all about these things. Why didn’t you tell me sooner? Or have you only just found out? Oh, my poor darling!’

The questions came ever faster and she stopped when she ran out of breath. She looked at Kate in horror. A piece of pickle dropped out of the sandwich she was holding and landed on her lap.

‘Calm down, Mum. I’m not ill. It isn’t cancer. Stop panicking. Just listen for a moment or two and I’ll tell you.’

‘Well, what a relief that is! But you’ve come specially to tell me something so it’s got to be important. Is there a problem with your businesses? Are you in debt? You’re not in trouble because of a wrongly dispensed prescription, are you? There was something on the radio recently about a case like that. Is there a lawsuit? My God, what will the neighbours say?’

Kate’s silence eventually got through to her mother.

‘Sorry, Kate. You asked me to listen. And all I’ve done is talk. I will listen now.’

There was a long pause. Kate could see her mother struggling to take in the information, to find the right words.

‘I came to talk to you about it and try to get my head straight concerning what I’m going to do. It’s called seeking parental advice.’

‘I didn’t think you and Neil wanted children. Isn’t it a bit late now?’

‘Mum, I think you’ve missed the point. I didn’t intend to become pregnant.’

‘You, Kate? You’re always so organised, you don’t have accidents. I bet you were on the pill and it failed. Always thought it was risky. A bad idea.’

Kate recalled a conversation they had years ago, prompted by a television programme about the pill. Her mother didn’t believe it worked and was uncomfortable discussing it. Kate tried to explain its mode of action but her mother would not listen and was adamant in her views. Instead she turned to finding negative, unscientific comments in newspapers or magazines, cutting them out and posting them to Kate. It was the closest she got to advice on contraception.

This was proving harder than she expected. Her mother was either naïve or being deliberately difficult. Surely it could not still be embarrassment?

‘So what does Neil think?’

‘Shouldn’t you tell him?’

‘Okay, Mum. Let me give you the whole story. It’ll surprise you, probably shock you, but hear me out.’

A stunned face looked back. ‘I need a cup of tea. Just let me put the kettle on and make a pot.’

Tea was the answer. Her mother would make it whatever she said. Kate was standing looking out at the garden, manicured and neat, all character having been removed with the weeds, when her mother returned. With a shaking hand, she poured out two cups, trying not to look her daughter in the eye. Twice she started to say something and stopped herself. Kate broke the silence.

‘Do you remember a boyfriend I had in the last year at university? A guy called Jonathan.’

Her mother’s face brightened. ‘Lovely lad. I do remember him. He had lunch with us on one of our visits and was a delight. Chatted away to your dad and me as if he’d known us for years. And he brought you here when I had to go into hospital to have that gallstone operation. Me and your dad, we hoped it would last. Fancied having him as a son-in-law. Would have been an asset to the family. Not that I have a problem with Neil, of course. But suddenly he wasn’t around anymore. You never did tell us why and I didn’t like to ask.’

‘Well, I met him again at the reunion a few months ago.’

‘You remember – I told you about it. We went back to the pharmacy department to celebrate thirty years since we all graduated. Without giving you unnecessary details, Jonathan and I ended up in bed and I think the baby is his.’

Her mother let out a cry worthy of a third-rate, sensational film.

‘Oh, Kate, how could you? What a sluttish thing to do! And with your upbringing! I can’t believe a daughter of mine would behave like that!’

‘Which century are you living in, Mum? It’s 2006, people hop in and out of bed with each other all the time. Anyway, there was a reason for it, a serious reason which I don’t intend to go into. It wasn’t just lust or trying to turn the clock back. And I don’t sleep around; I object to being called a slut.’

Her mother gave her an unbelieving stare and made a guttural grunt.

Linda Fawke is an arts person who studied science but always wanted to write. Now retired, she indulges this passion, writing fiction and non-fiction, even occasional poetry, preferably late at night. She has now written two novels, ‘A Taste of His Own Medicine’ and its sequel, ‘A Prescription for Madness’ using her background in pharmacy as the setting of both. These are easy books to read, suitable for book club discussions. ‘A Prescription for Madness‘ is more serious than the first book, dealing with such issues as pregnancy in later life and Down’s Syndrome.

She has been a winner of the Daily Telegraph ‘Just Back’ travel-writing competition and has published in various magazines including ‘Mslexia’, ‘Litro’ online, ‘Scribble’, ‘The Oldie’, ‘Berkshire Life’ and ‘Living France’. She was a finalist in the ‘Hysteria’ short story competition.

Linda blogs at www.linimeant.wordpress.com where her ‘Random Writings’ include a range of topics from travel to ‘Things that pop into my head’.