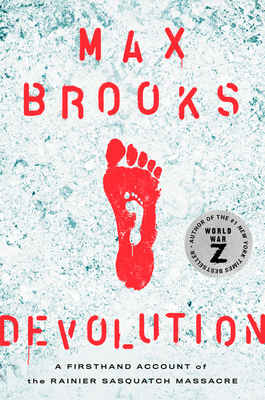 As the ash and chaos from Mount Rainier’s eruption swirled and finally settled, the story of the Greenloop massacre has passed unnoticed, unexamined . . . until now.

But the journals of resident Kate Holland, recovered from the town’s bloody wreckage, capture a tale too harrowing—and too earth-shattering in its implications—to be forgotten.

In these pages, Max Brooks brings Kate’s extraordinary account to light for the first time, faithfully reproducing her words alongside his own extensive investigations into the massacre and the legendary beasts behind it.

Kate’s is a tale of unexpected strength and resilience, of humanity’s defiance in the face of a terrible predator’s gaze, and inevitably, of savagery and death.

Yet it is also far more than that.

Because if what Kate Holland saw in those days is real, then we must accept the impossible. We must accept that the creature known as Bigfoot walks among us—and that it is a beast of terrible strength and ferocity.

Part survival narrative, part bloody horror tale, part scientific journey into the boundaries between truth and fiction, this is a Bigfoot story as only Max Brooks could chronicle it—and like none you’ve ever read before.

The title of the novel tells you everything you need to know and expect: a volcanic eruption, Sasquatch (what!?!?!)  and a massacre (Everyone is gonna die!!!  Right?????)   and I was ready for this adventure of horror. I listened to the audiobook version which was superb!

Devolution is formatted through Kate Holland’s journal, investigations, and more.  Through the novel we get a first-hand account of the Mount Rainier eruption and the small town’s fight for survival.  Due to the eruption, the already well isolated town becomes even more isolated as they cannot reach anyone outside and have to fend for themselves.  Then comes…. Well you know what is coming.

I cannot give the novel 5 stars as the beginning did really drag for me.  I was even tempted to DNF it, but the fact that I knew Bigfoot and disaster was coming kept me going.  And once the monsters appear, you can’t help but HAVE to finish this novel!  Kate totally transforms from housewife to a badass warrior and I really liked her and rooted for her.  Devolution has multiple meanings and we see Kate evolve or more so devolve throughout the course of the novel.

If you have ever had any interest in Bigfoot/Sasquatch then Devolution is a MUST READ book!  If you are picturing Bigfoot as in Harry and the Hendersons, these are NOT that kind of Sasquatch!  These are big, hairy, animalistic, and downright frightening monsters!

From the title you know what is going to happen and I was ready for this frightful adventure! I hope that is becomes a well-done series for TV. I would totally watch it!  The main narrator for the audiobook is Judy Greer.  You may not know her name but if you look her up you WILL recognize her as an actress who has been in many films, but never in the starring role.  As I listened to Devolution I pictured Greer as Kate Holland and really hope that when and if a mini-series comes around that she has the starring role!

There are other narrators in addition to Greer: Nathan Fillion, Kimberly Guerrero, and Max Brooks with special appearances by Jeff Daniels, Mira Furlan, Kate Mulgrew, and Steven Weber. The audio also included Terry Gross and Kai Ryssdal as themselves. But Greer was the star of the audiobook for me.

Brooks is very descriptive and you can picture everything from the way the monsters are portrayed. I even liked the way the novel ended.

Devolution is recommended if you can get past the slower pace of the beginning!