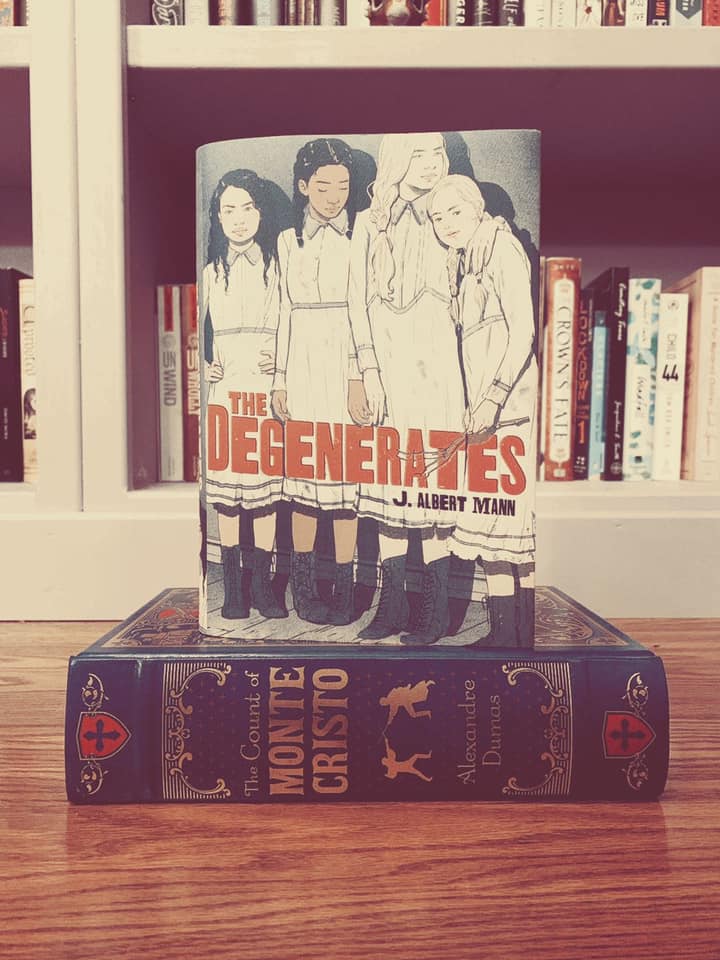 The Massachusetts School for the Feeble-Minded is not a happy place. The young women who are already there certainly don’t think so. Not Maxine, who is doing everything she can to protect her younger sister Rose in an institution where vicious attendants and bullying older girls treat them as the morons, imbeciles, and idiots the doctors have deemed them to be. Not Alice, either, who was left there when her brother couldn’t bring himself to support a sister with a club foot. And not London, who has just been dragged there from the best foster situation she’s ever had, thanks to one unexpected, life-altering moment. Each girl is determined to change her fate, no matter what it takes.

The Massachusetts School for the Feeble-Minded. I mean, is anyone surprised? Plus, this cover speaks to my soul. I found it randomly browsing at Books-a-Million, plus Ivan dragged me on a weekend fishing trip out in the humidity; I’m pretty sure I deserved it . . . so I bought it.

I liked how Mann stayed focused on the characters. I was also very impressed by her handle on the thinking of each girl, especially Rose, who has Down Syndrome. The simple fact is that back during that time, when society didn’t know what to do with someone, they sent them to an asylum. We’ve had this conversation before and y’all know that I very much support bringing back long term mental health facilities on a national scale. However, this school is not the way to do it. It echoes Ten Days in a Mad House by Nellie Bly. Doctors seemed to have made stuff up as they went along. While it was the reality, and in many ways it was understandable, these girls refused to accept reality. I liked how they didn’t give up on their dreams of a regular life. They clung to each other and seemed to consciously rise above their diagnoses. That kind of spirit is encouraging and uplifting.

It didn’t end like I expected, but I actually liked the ending. I absolutely recommend this to those who like an emotional read and I would absolutely give this book to older teens. I think they could learn a lot from it. 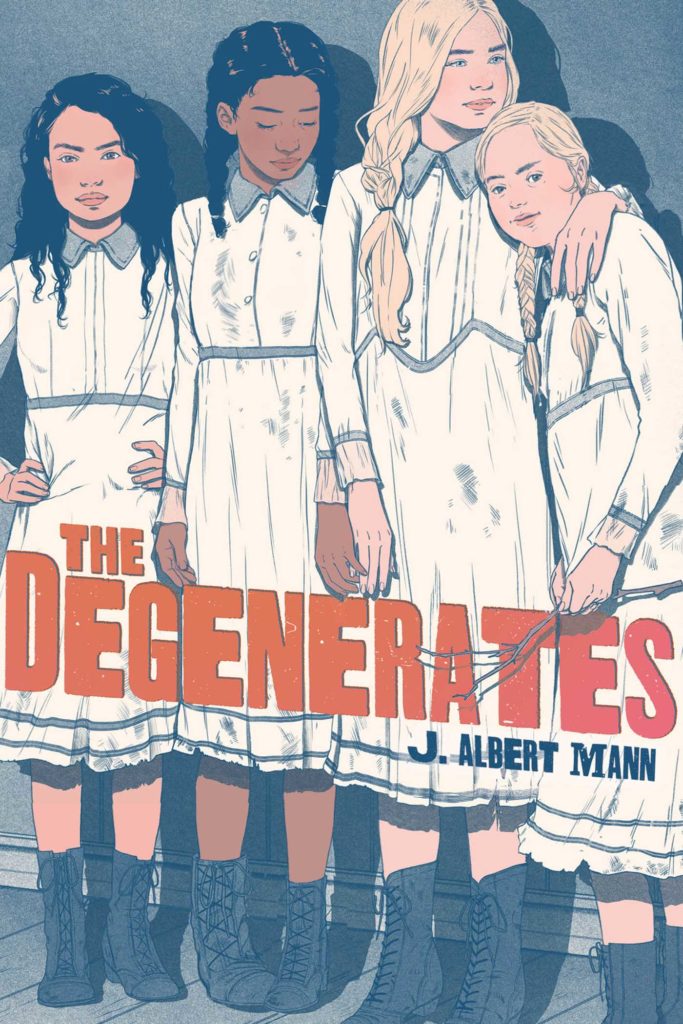 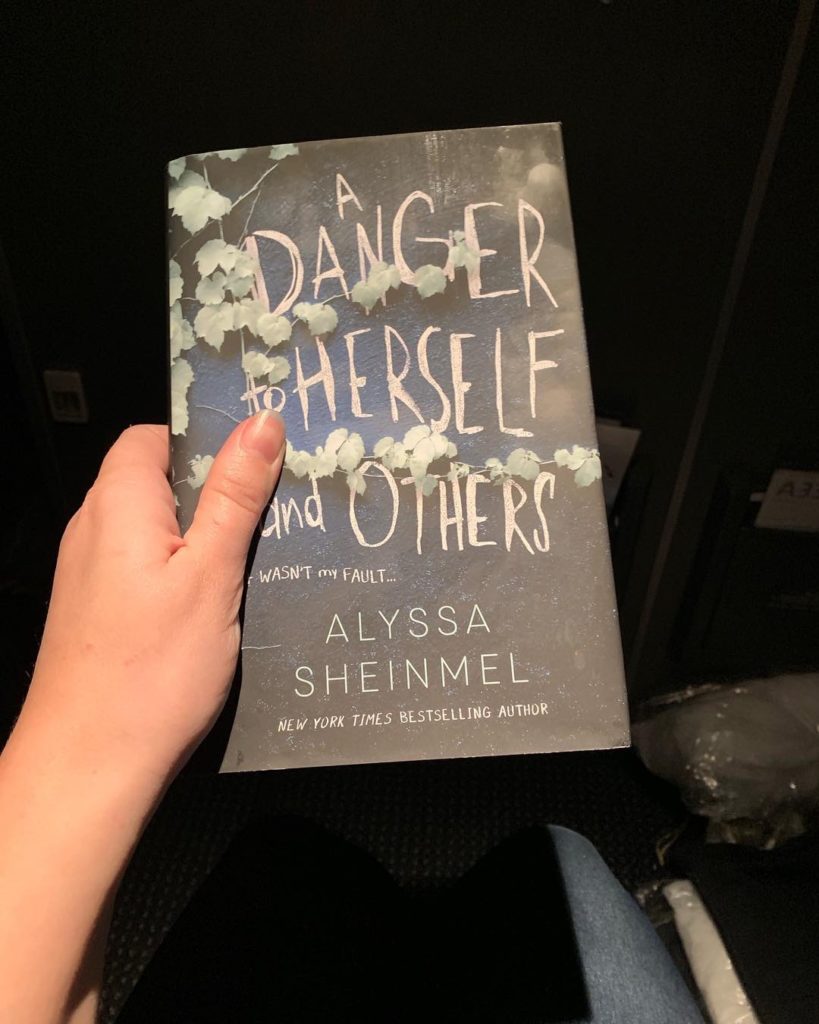 Four walls. One window. No way to escape. Hannah knows there’s been a mistake. She didn’t need to be institutionalized. What happened to her roommate at her summer program was an accident. As soon as the doctors and judge figure out that she isn’t a danger to herself or others, she can go home to start her senior year. In the meantime, she is going to use her persuasive skills to get the staff on her side.

Then Lucy arrives. Lucy has her own baggage. And she may be the only person who can get Hannah to confront the dangerous games and secrets that landed her in confinement in the first place.

I’ll be completely honest, I bought this book for the psych institution. Y’all know I’m a sucker for those! So I got it and I read it on the long flight from Charlotte to Heathrow and it was totally worth it! This book is fascinating! I was expecting a creepy hospital, maybe some ghosts or experimentations. But it was pretty exclusively within Hannah’s little room.

At first, I thought I was going to be disappointed, but I wasn’t. Watching Hannah struggle with her own sanity, in the guise of conflict with her doctor . . . Wow! And I admit that I’m a shallow person and I was expecting it all to fly over my head, but it didn’t! Just when I thought I had it all figured out, something would surprise me. Sadly, here’s another review where I can’t say much. This book isn’t action-packed; it’s far more contemplative. But I really liked it and I absolutely recommend it for people who like thinking books. I’d save it for older teens, just due to some mature stuff. An excellent book and everyone should read it!! 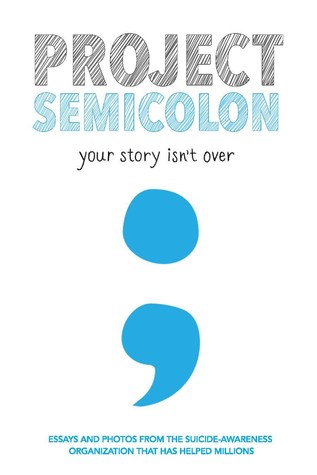 For fans of PostSecret, Humans of New York, and If You Feel Too Much, this collection from suicide-awareness organization Project Semicolon features stories and photos from those struggling with mental illness.

Project Semicolon began in 2013 to spread a message of hope: No one struggling with a mental illness is alone; you, too, can survive and live a life filled with joy and love. In support of the project and its message, thousands of people all over the world have gotten semicolon tattoos and shared photos of them, often alongside stories of hardship, growth, and rebirth.

Project Semicolon: Your Story Isn’t Over reveals dozens of new portraits and stories from people of all ages talking about what they have endured and what they want for their futures. This represents a new step in the movement and a new awareness around those who struggle with mental illness and those who support them. At once heartfelt, unflinchingly honest, and eternally hopeful, this collection tells a story of choice: every day you choose to live and let your story continue on.

Learn more about the project at www.projectsemicolon.com.

May is Mental Health Awareness Month, so I feel reading and reviewing Project Semicolon this month was in perfect timing.

Amy Bleuel started Project Semicolon in 2013 to give hope and love for those who are struggling with mental illness, suicide, addiction, and self-injury. The semicolon is used because in literature it is intended to continue a sentence versus ending it.  Using the semicolon, you show that you are choosing to continue on despite your situation. This is a symbol with so much meaning!

Project Semicolon is a non-fiction book that is comprised of many individual stories in their own words. These stories range from a few sentences to several pages. Some stories give details of their lives, some just touch on issues.  It does begin with a disclaimer/trigger warning that these stories could affect you if you have suffered and advises to stop reading if this occurs. At the end of the book is various organizations’ information on who to contact if you feel you need assistance.

Project Semicolon is a book you do not have to read in its entirety, but you should and I did.  It is a difficult read and one I took in steps to read.  You can feel the anguish that all the authors have in sharing their stories.  Some of the stories are ‘In Memoriam’, with those sharing stories after losing someone to suicide. I recommended reading all of Project Semicolon as the stories that touched me the most were in the second half of the book.   The stories that affected me the most were:

In addition to the stories shared, there are photos of the semicolon tattoo in its various forms throughout the book that are the storytellers’ own tattoos. That gives each story an even more personal touch. I would have liked more details in some of the stories: Some are so brief we don’t learn much about the person’s story. Some stories felt incomplete (which they of course could be as they may still be facing their monsters) and some felt impersonal and like an essay. I would have liked to learned more on their journeys and what helped them succeed.

Project Semicolon does also include Amy’s story in her own words.  Despite starting Project Semicolon, Amy lost her battle with these issues on March 23, 2017 at the age of 31. Her legacy continues as Project Semicolon is still around helping those who need it today.  Here is an article I found that address Amy’s death and how complex suicide prevention is.

Amy’s story is here in her own words.

Project Semicolon is definitely worth a read and is a great organization that is devoted to helping others overcome their battles they face. If you feel you need help please get it. You ARE worth it and your story isn’t over!