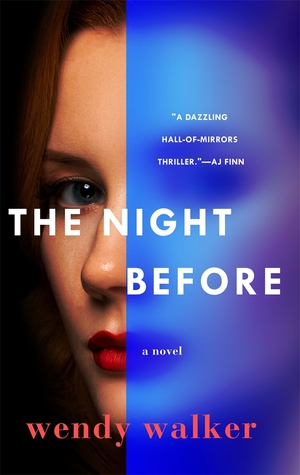 The Night Before
Author: Wendy Walker
Published:  May 14, 2019
Audiobook

Laura Lochner has never been lucky in love. She falls too hard and too fast, always choosing the wrong men. Devastated by the end of her last relationship, she fled her Wall Street job and New York City apartment for her sister’s home in the Connecticut suburb where they both grew up. Though still haunted by the tragedy that’s defined her entire life, Laura is determined to take one more chance on love with a man she’s met on an Internet dating site.

Rosie Ferro has spent most of her life worrying about her troubled sister. Fearless but fragile, Laura has always walked an emotional tightrope, and Rosie has always been there to catch her. Laura’s return, under mysterious circumstances, has cast a shadow over Rosie’s peaceful life with her husband and young son – a shadow that grows darker as Laura leaves the house for her blind date.

When Laura does not return home the following morning, Rosie fears the worst. She’s not responding to calls or texts, and she’s left no information about the man she planned to meet. As Rosie begins a desperate search to find her sister, she is not just worried about what this man might have done to Laura. She’s worried about what Laura may have done to him…

This one had a premise that really intrigued me, but the novel itself fell flat.  I was looking for a fast moving novel where the woman seemingly is the victim but is actually not and she is holding her date prisoner and who knows what may happen next.

I was at first intrigued by Laura and Rosie being sisters and Laura’s concern and determination to find her sister, but a little later in the novel I was just not invested in their story anymore. The Night Before also has multiple povs, which I normally enjoy but this novel just didn’t agree with me. There is a twist I didn’t see coming and when it is revealed you had to take a minute and think about the reality of this scenario in regards to the story.  From that point on I was just ready to end the novel but I only had so much left that I continued.

I did listen to the audiobook version and maybe that was the problem for me with this novel.  This may be one to actually read versus have read to you.

I would give Ms. Walker another chance in reading another of her novels, but this one just didn’t work for me so I cannot recommend it.