Self-proclaimed fat girl Willowdean Dickson (dubbed “Dumplin’” by her former beauty queen mom) has always been at home in her own skin. Her thoughts on having the ultimate bikini body? Put a bikini on your body. With her all-American beauty best friend, Ellen, by her side, things have always worked…until Will takes a job at Harpy’s, the local fast-food joint. There she meets Private School Bo, a hot former jock. Will isn’t surprised to find herself attracted to Bo. But she is surprised when he seems to like her back.

Instead of finding new heights of self-assurance in her relationship with Bo, Will starts to doubt herself. So she sets out to take back her confidence by doing the most horrifying thing she can imagine: entering the Miss Clover City beauty pageant—along with several other unlikely candidates—to show the world that she deserves to be up there as much as any twiggy girl does. Along the way, she’ll shock the hell out of Clover City—and maybe herself most of all.

I had heard about Dumplin’ and when I found out it was going to become a Netflix movie, I very quickly listened to the audiobook. In fact, I finished the book a few days before the premiere on Netflix.

Dumplin’ was just an average read.  I’ve read books that were worse and others that were well done.  Dumplin’ is a book supposedly about body positivity that did not really deliver. Willowdean is fat and knows it.  She also doesn’t care that she is fat until a hot boy starts working with her. Then she begins to have body issues and becomes insecure.  She is also dealing with the death of her aunt who was also a very large lady.

There is also drama occurring with her BFF (they are seemingly growing apart) and it is also pageant season for teens in the very small town that Willowdean lives in. Also, her mom is in charge of and runs the pageant, and even won it one year.

This is really the extent of the story: lots of teen drama with a side of a beauty pageant.  There is also a love triangle that develops.  Of course Willowdean prefers  the hot guy over the other guy who would be more suited for her (I liked him better than Bo the hottie).

Hearing about Willowdean’s relationship with her aunt is what kept me listening to the book.  I enjoyed finding out more about her aunt’s life, which Willowdean did not know about. I was also curious as to what was going to happen during the pageant.

If you like books with teen drama, this will be the book for you. It was a miss for me. 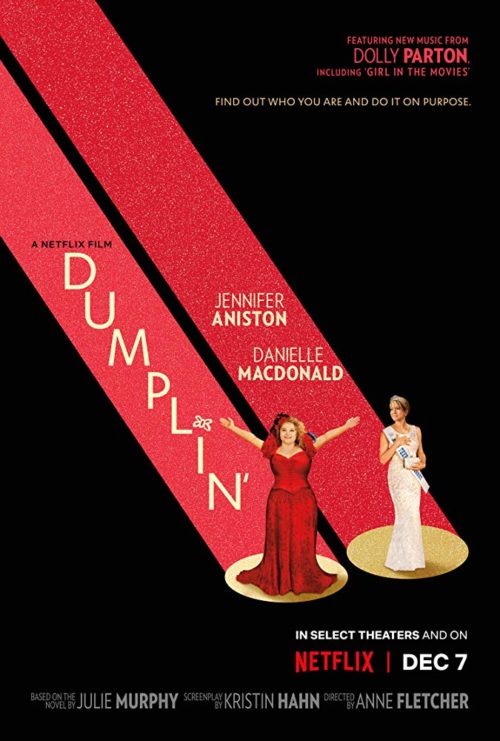 I wanted to watch Dumplin’ once I saw a trailer and saw who was in it: Jennifer Aniston playing Willowdean’s mom, and Bex Taylor-Klaus as Hannah.  My conclusion is this: Watch the movie first then read the book. There are a lot of differences from the movie compared to the book.  In the book there is a love triangle, and to me the movie seemed to combine both boys into one character.  The teen drama is negligible (which can be a good thing).  You don’t really see the extent of Willowdean and Ellen’s friendship and falling out as was in the book.

Both the novel and movie are just average for me.  The film does better with body positivity than the novel did for me. The author Julie Murphy makes a very brief (blink and you miss it) cameo in the film, which is always exciting.  I love it when authors get to see their vison become a film (and hopefully it was close to their vision- I know they have basically no control over the film).

The movie was also filmed in Georgia which is always exciting. We are “Little Hollywood”, yet not so little anymore!  I thought one scene looked familiar and when I saw the end credits I had to look it up” Yes- It WAS the Cobb Civic Center that was used in the film!