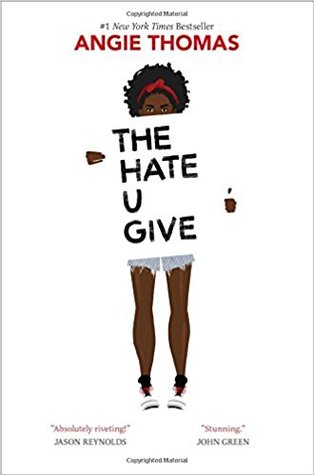 Sixteen-year-old Starr Carter moves between two worlds: the poor neighborhood where she lives and the fancy suburban prep school she attends. The uneasy balance between these worlds is shattered when Starr witnesses the fatal shooting of her childhood best friend Khalil at the hands of a police officer. Khalil was unarmed.

Soon afterward, his death is a national headline. Some are calling him a thug, maybe even a drug dealer and a gangbanger. Protesters are taking to the streets in Khalil’s name. Some cops and the local drug lord try to intimidate Starr and her family. What everyone wants to know is: what really went down that night? And the only person alive who can answer that is Starr.

But what Starr does—or does not—say could upend her community. It could also endanger her life.

I have thought about how to review this novel for several days after finishing.  I was admittedly nervous to read it due to the content and controversy of this novel, but felt I had to read it.  This may be a review that not everyone will agree with, but it is MY opinion.  I have debated on sharing it on social media as this review will go against the mainstream.

Yes, this is an important novel that will bring about many discussions, I just don’t agree with it. And yes, I see both sides of the issue.

A police officer shot an unarmed young man. BUT the young man didn’t do what he should have done.  Starr is our narrator and she even tells us about ‘the talk’ her parents had with her if she were to ever be pulled over by a police officer. She tells us these rules and she tells us what is going on when she and her long time childhood friend Khalil are pulled over.  Khalil does not follow these ‘rules’. Be respectful to the officer, Khalil mouths off and gives attitude.  When the officer steps away Khalil goes back towards the car and opens the door! No sudden movements!  You don’t do that! Yes, Khalil was checking on Starr to make sure she was ok, but the officer did not know that.  Police officers are trained for certain situations and have to make sudden choices that mean life or death.  I have taken classes with local police departments and part of that is FATS: Fire Arms Training Simulation. This is where a situation plays out in front of you on a screen and you have to face that sudden, unexpected choice of to shoot or not to shoot. That can be life changing for a police officer. Do they get killed or the person they are facing? Everyone should do this at least once. It gives you a different perspective of what police officers go through.

Back to the novel: Khalil is a black teenager and the officer happens to be white. So this becomes a racial issue.  Khalil also did not have a weapon.  Rumors begin to surface that Khalil was a drug dealer and gang member.  Starr finds out things about her friend that she did not know.  She and her family fear what could happen if it becomes known that she witnessed the shooting. I can’t help but wonder what the novel would have been like if the officer had been black.

Starr is also a black teenager and lives in a poor neighborhood but attends a suburban prep school that is mainly made up of white students. Some of her friends are stereotypical and you can’t believe some of these kids!   Starr’s parents made the decision for her to attend that school. They want a better life for her. In some ways Starr seems bipolar- she is one person at home in the neighborhood and someone else while at school.  Who is the real Starr? I don’t think she even knows.

She is also dating a white boy from her school and has for a year.  Do her parents know this? No, and her dad would not be happy about this.  At one point she says she can’t be with Chris as he is white. He also wouldn’t understand what she is going through because he is white. Really? Give the boy a chance!

As people are upset about Khalil’s death, they protest. They even protest at Starr’s school.  Those students did not even know him- they were basically protesting to get out of class.  There is also a difference between protesting and full out rioting.  This occurs in the novel as well. I don’t understand this. Damaging people’s property, leaving clean up and more lives affected once protests are over.

Yes, there are good police officers and bad officers.  I listened to the shooting a second time after I finished the novel.  Khalil was shot three times in the back.  Three times seems extreme.

Yes, I do see both sides of this controversial issue. This will be an issue for a while.  That was the purpose of this novel: To bring out conversation and make you think.  It made me think and still does.  The novel is not really for me.  There is foul language used, including the ‘N’ word and there are some sexual references.  I would say parents read first before you let your kids read this novel. I would not let a young child read it but this would be for older teenagers. Teenagers are old enough to understand the issue and have that conversation.

Though not really a book for me, I do recommend it for the conversations it will bring.