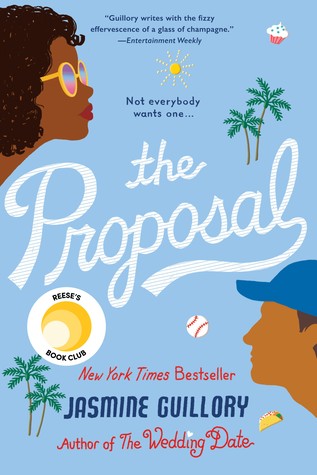 The author of The Wedding Date serves up a novel about what happens when a public proposal doesn’t turn into a happy ending, thanks to a woman who knows exactly how to make one on her own…

When someone asks you to spend your life with him, it shouldn’t come as a surprise–or happen in front of 45,000 people.

When freelance writer Nikole Paterson goes to a Dodgers game with her actor boyfriend, his man bun, and his bros, the last thing she expects is a scoreboard proposal. Saying no isn’t the hard part–they’ve only been dating for five months, and he can’t even spell her name correctly. The hard part is having to face a stadium full of disappointed fans…

At the game with his sister, Carlos Ibarra comes to Nik’s rescue and rushes her away from a camera crew. He’s even there for her when the video goes viral and Nik’s social media blows up–in a bad way. Nik knows that in the wilds of LA, a handsome doctor like Carlos can’t be looking for anything serious, so she embarks on an epic rebound with him, filled with food, fun, and fantastic sex. But when their glorified hookups start breaking the rules, one of them has to be smart enough to put on the brakes…

My friend Devin told me about this one and that it was not for her… She warned me, but did I listen to her????  Nope, not at all and I should have!  The premise of The Proposal is what made me want to read it.  Can you imagine that happening to you!?!?!

I liked how there was diversity for the characters, but most of it came off as cliché to me. Fortunately diversity is growing in novels now whether the diversity is race, religion, sexual identity/preference, or even disability.  Unfortunately, I was not attached to these characters as they really were not likeable for me. Once the novel starts going in a certain direction you know how this story is going to ultimately end.

There was a lot of foul language in the novel, which did not seem necessary. I do read romances from time to time and I guess I like the sweet romances a ’la Katherine Center (which hers can have some intensity to them) . I did not need all the details with the sex that occurred. We get it, Nik is having some great sex.

The reason I gave it 2.5 stars versus just 2 stars was the beginning, I loved everything about it!  Nikole was not even expecting a proposal and what happened afterwards that day was the best part of the novel.  From the beginning I thought I was in for a novel I was going to really enjoy. Sadly, the rest did not deliver for me.

This is one I just cannot recommend.